The China electronic design automation software market size was valued at USD 1.06 billion in 2021 and is expected to register a CAGR of 11.2% from 2022 to 2030. The presence of several semiconductors and automotive manufacturing industries in the country is one of the prime factors driving the market growth. The Chinese government has extended its support to encourage local manufacturers through initiatives like Made in China 2025, which is anticipated to drive local semiconductor manufacturing. Such factors are expected to increase the adoption of electronic design automation (EDA) software by the Chinese semiconductor manufacturers, which bodes well for market growth. 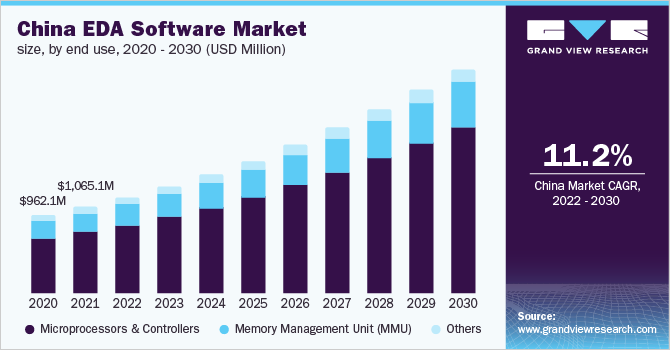 The increasing demand for new and advanced features in consumer electronics, smart home appliances, and automobiles is expected to contribute to market growth. The introduction of advanced features requires sophisticated hardware, which is driving collaborations between microchip manufacturers and OEMs. Chip manufacturers have been investing heavily in product innovation and research to enhance circuit designs to support various technologies such as IoT and artificial intelligence. This is expected to increase the adoption of EDA software and contribute to market growth.

The COVID-19 outbreak two years ago led to the closure of several manufacturing plants in China, thereby impacting several players along the value chain. EDA is one of the essential components of the electronics value chain, which experienced a slight impact during the first two quarters of 2020. However, as the effect of the pandemic started diminishing, several industries resumed operations by the end of the second quarter. The EDA software market recovered strongly during the remaining two quarters and regained its pre-pandemic growth rate, which is expected to continue post-pandemic and over the forecast period.

China relies heavily on the EDA tools developed by U.S. companies, which is expected to challenge market growth due to the ongoing trade tensions between the two countries. The current EDA market in China is mainly dominated by foreign companies such as Cadence, Synopsys, Inc., and Mentor (Siemens), among others. For instance, as reported by INEWS, foreign companies accounted for more than 80% of the market share for EDA tools in China in 2020. However, increasing investment and backing from the Chinese government in developing the domestic semiconductor industry is expected to contribute to the emergence of several EDA firms in the country.

The domestic semiconductor industry is backed by the Chinese government, which offers tax incentives and huge capital to the semiconductor manufacturers. The Chinese government has created a state-backed fund of USD 29.00 billion to minimize its dependence on foreign technology and semiconductor products. This has resulted in attracting venture capitalists and contributed to the growing appetite for domestic innovation, which is anticipated to contribute to the growth. For instance, X-Epic, one of the leading players in the Chinese EDA market, raised USD 15.4 million of funding in a Pre-A round of financing, which was led by China V Fund, post which the company has completed other such successful rounds of funding.

The microprocessors and controllers segment accounted for the largest share of over 70% in 2021. The large share is attributed to the increasing demand for consumer electronics, smart appliances, electric vehicles in residential and commercial sectors, and automation across the manufacturing industries. 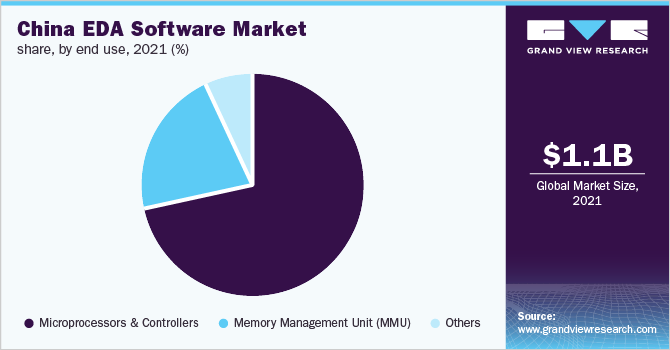 Advancements in product and manufacturing technologies and miniaturization of components have resulted in a high density of transistors on the integrated circuits, increasing the complexity of the circuit boards and controllers. As such, semiconductor manufacturers in China are expected to adopt the EDA software in a bid to support and enhance the design and manufacturing processes of microprocessors and controllers, thereby driving growth.

The memory management unit segment is anticipated to exhibit steady growth over the forecast period, owing to the rising demand for high storage capacities, the latest operating system and application upgrades, and more. Software vendors are engaged in adding new features to their applications and operating systems through continuous upgrades, which require an ample amount of device memory as well as speed to run the applications without any glitches.

Manufacturers are focused on developing memory hardware that offers support to existing as well as upcoming versions of applications and operating systems, ensuring seamless operation on end-user devices. As such, numerous features rolled out each day by the software vendors have upped the demand for sophisticated components to support high processing speeds, which is expected to drive the adoption of EDA software, thereby contributing to market growth.

The China Electronic Design Automation (EDA) software market is consolidated with the presence of a few major companies accounting for a high market share. The major players are adopting inorganic growth strategies acquiring and merging with smaller players to leverage their technology for product innovation and gain a competitive edge. Several domestic players emerging in the market are expected to provide competition to foreign companies through vigorous R&D and new product launches.

The report forecasts growth in terms of revenue across China and provides an analysis of the latest industry trends and opportunities in each of the sub-segments from 2018 to 2030. For this study, Grand View Research has segmented the China Electronic Design Automation software market report based on end-use:

How big is the China electronic design & automation market?

b. The global China electronic design automation software market size was estimated at USD 1.06 billion in 2021 and is expected to reach USD 1.18 billion in 2022.

What is the China electronic design automation software market growth?

b. The microprocessors and controllers segments dominated the China electronic design automation software market with a share of more than 70% in 2021. The large market share is attributed to the increasing demand for consumer electronics, smart appliances, electric vehicles in residential and commercial sectors, and automation across the manufacturing industries.

Who are the key players in China electronic design automation software market?

What are the factors driving the China electronic design automation software market?

b. Key factors that are driving the market growth, include the presence of several semiconductors and automotive manufacturing industries, favorable government initiatives, and increasing investment by OEMs in product development and research.