The global chocolate market size was valued at USD 130.56 billion in 2019 and is expected to grow at a compound annual growth rate (CAGR) of 4.6% from 2020 to 2027. Rising awareness regarding dark chocolate as a healthier confectionery product, which consists of antioxidants that protect the skin from harmful ultraviolet rays, is expected to promote the market growth over the next few years. 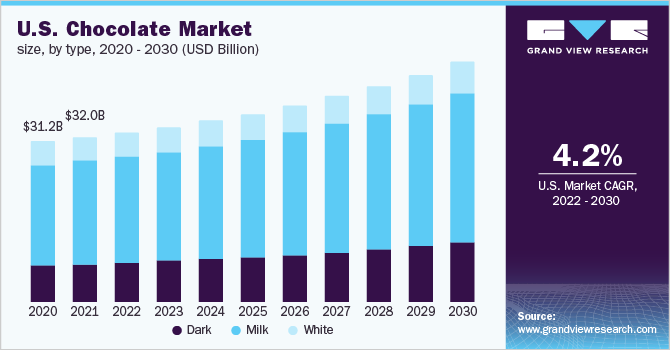 Furthermore, impulse buying behavior among millennials and youngsters as a result of increased awareness from social websites and satellite television channels by confectionery companies, such as Nestle SA and Mars Incorporated, is projected to have a positive impact on the industry growth.

As per the health experts, moderate consumption of chocolate boosts serotonin that calms the brain and acts as an anti-depressant. It also releases endorphins in the body, which instantly elevates mood. According to the World Health Organization, in 2016, 17% of Chile's population suffered from depression, which is the highest rate in the world.

Consumption of chocolate also suppresses the release of cortisol, a stress hormone. It is preferable for the consumers to include elements in regular diet that alleviate a health issue rather than depending upon medication. As chocolate helps in relaxing the mind and inducing happiness, it is expected that sales of chocolate will continue to witness a boost during the coming years.

Chocolates are also associated with a token of appreciation, love, and happiness, which are given as gifts during the festive season, thereby propelling the product demand. They are manufactured in different shapes, sizes, colors, and product materials as per the occasion. As per the National Confectioners Association, 150 million Santa-shaped chocolates were manufactured in North America during Christmas.

Dark chocolate consumption is also associated with reducing the risk of cardiovascular diseases owing to the presence of good fats and flavonoids that are considered to lower blood pressure and bad cholesterol level. According to the WHO data published in 2017, coronary heart disease deaths in Mexico reached 94,712 or 17.46% of the total deaths. Several observational studies have shown that consumption of chocolate reduces the risk of cardiovascular diseases.

Traditional chocolate accounted for the largest share of 99.4% in 2019. This can be attributed to wider penetration, popularity, and easy availability of cocoa as compared to carob, which is the raw material for artificial chocolate. Milk chocolate is the dominant variant among various traditional chocolates as it enjoys the first-mover advantage in the market.

Artificial chocolate is expected to exhibit the fastest CAGR of 11.9% from 2020 to 2027. The rapid growth is attributed to the caffeine-free property of carob confectionery, which makes it suitable for caffeine-intolerant consumers. Furthermore, the calcium content in the carob is almost thrice the amount found in cocoa. This makes it exceptionally popular among women and those suffering from calcium deficiency.

For instance, as of May 2018, Walmart had 21 stores and plans to open around 50 more stores by the end of 2023 in India. Furthermore, retailers such as department stores and specialty stores are placing premium chocolates, such as Godiva, around the point of sale for a higher priced impulse purchase. 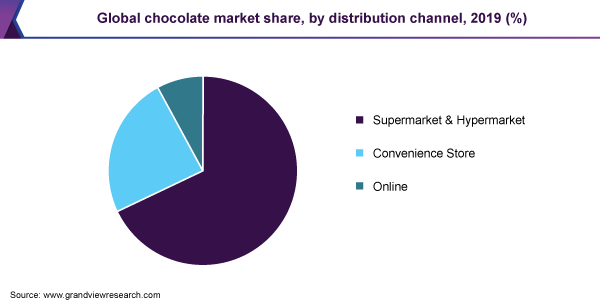 The online segment is expected exhibit the fastest CAGR of 5.6% over the forecast period. Online sales channel has witnessed significant growth in the last few years due to increasing internet penetration in various countries. Moreover, online retailers including Amazon and Walmart are adding this product category as the main focus area. Growing dependence of generation X, millennials, and generation Z parents on internet and e-commerce is a major factor expected to drive sales of chocolate through the online channel in coming years. A variety of features including several value-added services, such as discounted prices, cash-on-delivery, and paybacks, offered by e-retailers are expected to promote the growth of online channel in the coming years.

Europe held the largest share of 39.8% in 2019. Growing popularity of dark chocolate among consumers is a major factor contributing to the market growth in the region. According to the CBI, Ministry of Foreign Affairs, in 2019, Europe accounted for about 45% share in the dark chocolate market globally. In Europe, Germany dominated chocolate sales in 2019 owing to increasing per capita consumption.

Middle East and Africa is expected to expand at the fastest CAGR of 6.7% from 2020 to 2027 owing to increasing product availability at retail stores. Furthermore, favorable government initiatives, such as tax concession, for grinder and chocolate producers are expected to increase product availability in the region. Moreover, increasing number of specialty retailers is expected to contribute to market growth in the region. For instance, in February 2019, Pierre Marcolini opened the first store in a mall in UAE to expand the customer base.

The industry participants are expected to increase their spending on new product launches in order to expand their market size. For instance, in March 2020, The Hershey Company launched a new product under the brand name, Hershey's Cookies 'N' Chocolate Bar. The product consists of a milk chocolate bar and cookie crunchies. Some of the prominent players in the chocolate market include:

This report forecasts revenue growth at the global, regional, and country levels and provides an analysis on the latest industry trends and opportunities in each of the sub-segments from 2016 to 2027. For the purpose of this study, Grand View Research has segmented the global chocolate market report on the basis of product, distribution channel, and region: