The global clarified butter market size was valued at USD 1.57 billion in 2019 and is expected to witness significant growth in the forthcoming years. Globalization has played a crucial role in the adoption of clarified butter, also known as ghee, around the world. Millennials, the modern-day consumers have been exhibiting a keen interest in food and have been experimenting with taste and nutrition. 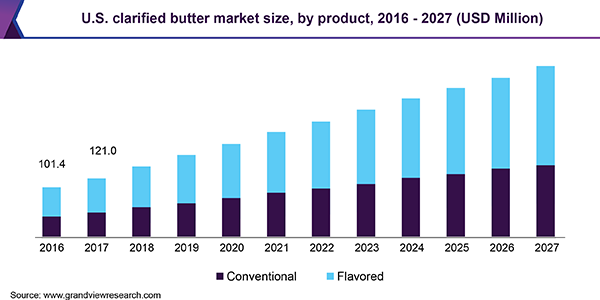 They are open to a myriad of choices due to reduced cross-border barriers in the movement of regional food ingredients. Changing taste patterns and increasing focus on nutritional enrichment among consumers have been creating new avenues for dairy manufacturers, which, in turn, is compelling them to introduce various kinds of clarified butter across the globe, thus driving the growth of the ghee market.

Modern-day consumers are becoming conscious of nutritional enrichment and have been consistently adopting products that are beneficial for health. As a result, consumers have been increasingly adopting clarified butter in various cuisines. These dairy derivatives are considered completely free of artificial preservatives and trans fats.

Clarified butter is known to have a rich nutty flavor, which enhances the taste of a recipe endlessly. Its intense flavor, along with its versatility, has contributed immensely to its inclusion in various cuisines. Clarified butter is used for sautéing, stir-frying, pan-frying, shallow frying, deep-frying, and drizzling over prepared food. Unlike various other alternatives available for the aforementioned purposes, this superfood actually imparts flavor to the food and makes it affluent and heavy on the palate. Clarified butter, when brought across heat, creates a distinctive aroma, which has a very enticing fragrance and is capable of enhancing the appetite.

Ghee, one of the most popular kinds of clarified butter, is also gaining popularity owing to its therapeutic properties. According to Ayurveda, the product has healing properties as it consists of chains of fatty acids, which enhance the absorption of nutrients and alkalize the blood. It is also used to reduce the secretion of leukotrienes and prostaglandins in the body as these cause pain and inflammation. Organic variants of the clarified butter have been proved to reduce cholesterol in the body and help in overcoming coronary issues. These clarified butter variants are also largely recommended for people with poor digestion as they initiate the secretion of stomach acids, which ultimately enhances the digestive capability of the stomach.

Conventional clarified butter accounted for more than 55% share of the global revenue in 2019. These product variants are widely used as the essential ingredients for cooking in Middle Eastern and Southeast Asian cuisines. The growth is attributed to the first movers and high adoption among households across these regions. Additionally, the growing adoption of healthy fats in developed countries has paved the way for industry participants to launch conventional ghee or clarified butter. For instance, in March 2019, Vital Farms launched Original Ghee Butter in the U.S. in squeeze bottles and liquid whole eggs in cartons.

The B2C segment accounted for more than 60% share of the clarified butter market in 2019. Different types of clarified butter are commonly used as an ingredient in their native countries, including India, Brazil, Ethiopia, and Yemen. Moreover, the adoption of clarified butter has been rising across the world as they are considered better for cooking in comparison to the other cooking oils.

The B2B segment is expected to expand at the fastest CAGR of 10.2% from 2020 to 2027. The growing popularity of Indian, Brazilian, Ethiopian, and Yemeni cuisines across the world is propelling the application of different kinds of clarified butter across the world. According to a study conducted in June 2019 by Joel Waldfogel, Indian food is the fourth most popular cuisine in the world. Restaurants and eateries serving Indian food made of native authentic ingredients, including ghee, have been mushrooming across the world.

Offline distribution channels accounted for more than 85% share of the global revenue in 2019. The channel includes point of sales, such as specialty stores, department stores, mom-and-pop stores, convenience stores, supermarkets, hypermarkets, and superstores. The majority of people prefer buying grocery items, including clarified butter, through these channels and availing of maximum discount. 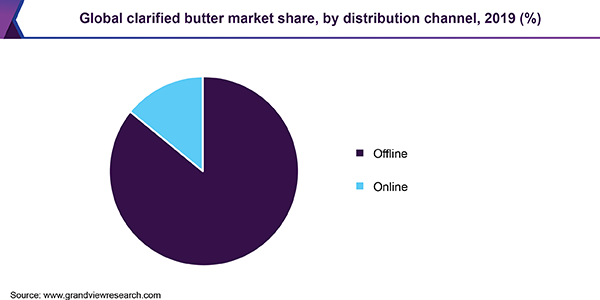 The online channels are expected to expand at the fastest CAGR of 12.1% from 2020 to 2027. The increasing dependence of the millennials on e-commerce channels owing to the busy lifestyle and growing need for convenience is propelling the trend of grocery shopping through online platforms. Furthermore, clarified butter is not readily available in offline stores across North America and Europe. Thus, online channels are increasingly preferred for buying clarified butter irrespective of geographic boundaries.

Europe is expected to expand at the fastest CAGR of 14.8% from 2020 to 2027. The presence of a large health-conscious population in countries, such as Germany, the U.K., France, and Italy, is projected to prompt the use of clarified butter as a superfood in daily diet. Additionally, an increasing number of migrants from South Asian countries, including India, Pakistan, and Bangladesh, is projected to open new avenues for clarified butter in the next few years.

Some of the key market players are Saputo, Arla Foods amba, Almarai, Heritage Foods Limited, Britannia Industries, HAP, Jhandewalas Foods Limited, Parmalat Canada, and GCMMF (Amul). The established players have realized the market potential and it has been acting as an inviting factor for many startups in the industry. Moreover, venture capital firms have been increasingly spending on these startups to leverage the opportunity. For instance, in July 2019, startup 4th & Heart, an innovative ghee manufacturer, closed a USD 7.6 million from Harbinger Ventures. Similarly, NutriMoo, another startup producing dairy products, along with ghee, secured funding of USD 1 million from IndoCan Honey Pvt Ltd.

This report forecasts revenue growth at the global, regional, and country levels and provides an analysis of the latest trends and opportunities in each of the sub-segments from 2016 to 2027. For the purpose of this study, Grand View Research has segmented the global clarified butter market report on the basis of product, application, distribution channel, and region: