Rapid industrialization and urbanization, particularly in the developing regions, such as the Asia Pacific and Latin America, have resulted in rapid electricity demand growth over the years for both commercial as well as residential applications. The advent of environmentally friendly technologies may hamper the market growth. Stringent regulations related to greenhouse gas emissions are anticipated to further curtail market growth and favor alternative electricity generation technologies. 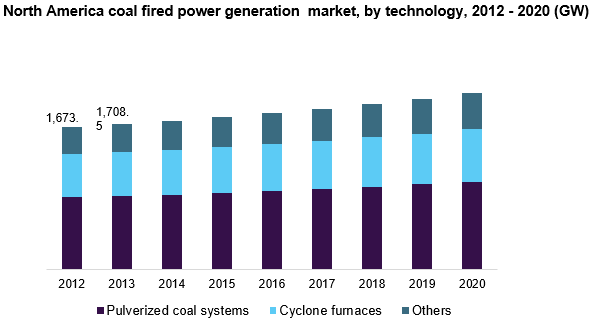 Volatile price for other power generation fuel substitutes such as oil and natural gas is another factor that inclines electricity producing companies to adopt coal as a major power generating source.

Growing environmental concerns have resulted in multiple regulations being issued by governments and environmental protection agencies. Technological innovation has led to several alternative power generation technologies being developed that are cleaner and have lower emissions. Governments across the globe have taken several initiatives to encourage alternative cleaner electricity generation sources. Such stringent regulatory frameworks coupled with the advent of cleaner alternative methods are anticipated to hamper the global market.

Pulverized coal firing technology dominated the global market accounting for nearly half of the market share followed by cyclone furnace technology. Pulverized coal-fired boilers use powdered coal to generate thermal energy in an attempt to efficiently use the entire boiler volume for combustion. Pulverized coal, as the rate of combustion can be controlled immediately and easily, gives a faster response to load changes. Cyclone furnace technology is the second most widely used method for power generation. 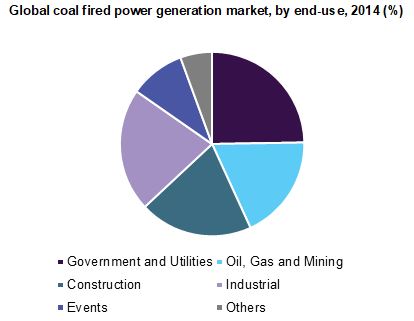 The commercial market is projected to reach over USD 1,163.0 GW by 2020. Increasing industrialization and urbanization particularly in the developing regions such as the Asia Pacific can be attributed to such robust commercial application growth in the near future. Moreover, R&D initiatives to increase efficiency, lower operating costs, and streamline logistical procedures offer ample opportunities for industry participants.

Asia Pacific dominated the global coal-fired power generation market in the recent past with 5% of the market share and is expected to witness a CAGR of 3.2% from 2014 to 2020. Economies such as China and India are expected to aid the regional market over the forecast period. Growing industrialization and upcoming power projects in the region are the major factors propelling the growth of the coal-fired power market in the Asia Pacific region.

Western markets such as North America and Europe are anticipated to witness a slightly slower growth rate as compared to the Asia Pacific owing to stringent regulatory measures. Growing environmental concerns have resulted in increasing acceptance of alternative power generation sources, particularly in the European region. Such advent of alternative sources is anticipated to hamper growth in certain regional markets.

This report forecasts installed capacities and installed capacities growth at global, regional levels and provides an analysis of the industry trends in each of the sub-segments from 2012 to 2020. For this study, Grand View Research has segmented the global coal fired generation market on the basis of technology, application, and region.