The global coal to liquid market size was valued at USD 3.88 billion in 2017. The CTL market is projected to expand further at a CAGR of 3.9% during the forecast period. Increasing dependency on natural gas and crude oil for the production of transportation fuels along with stagnant or slowly declining reserves as per the current industry scenario is the key factor responsible for the CTL technology implementation. The rise in the costs of crude oil or natural gas processing is further projected to drive demand for the CTL process.

Several CTL projects will be commercialized in near future with anticipation of incentive for prolonged efforts to convert coal to low-sulfur, ash-free transportation fuels and eventually gaseous fuels for domestic use. Technological advancements coupled with sustained growth of the liquid fuels demand for transportation are the key factors driving the global CTL market. In the current industry scenario, there are twenty active CTL facilities across the globe. With a rise in gas prices, the substitution of natural gas from dry coal, to be used in natural gas-fired power generation facilities, seems to be significantly economical. 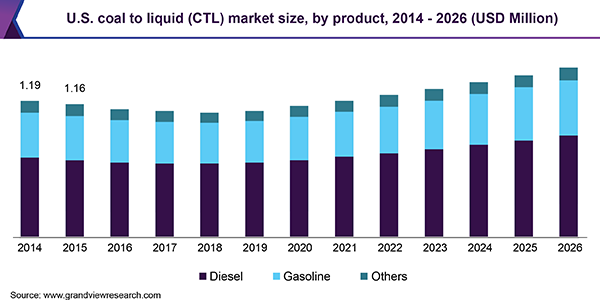 Technologically advanced fuel cell and combined cycle power generation operations will also require the conversion of coal to clean gaseous or liquid fuels. Liquid products derived from syngas are projected to capture a higher market share in the coming years. Easy availability of advanced and process-specific catalysts has enabled the production of higher hydrocarbons and oxygenates including methanol. Synthesis gas derived fuel products are expected to gain higher importance in near future. These products are useful for commodity chemicals and also find application as transportation fuels.

Moreover, they can be used in the production of storable supplementary fuel for IGCC electric plants. The Fischer Tropsch process is the most widely used coal synthesis process in the industry. Its reactions and polymerization of syngas efficiencies are considered to be higher and alterable as per specific requirements to produce a wide array of products, such as paraffin waxes, hydrocarbon gases, and oxygenates. Direct Coal Liquefaction (DCL) is widely used in various applications in a lot of CTL plants. The products produced using this process can be refined to meet most of the current specifications of transportation fuels.

Some of the mainly produced products include butane, gasoline, propane, and diesel fuels. Also, conventionally, this process offers five to ten percent higher efficiency as compared to Indirect Coal Liquefaction (ICL) owing to less consumption of gasified coal. The National Petroleum Council had presented several situations with the production forecast, which clarifies that the peak oil situation can only be partially solved by the currently operating CTL projects. The industry has to be commercially developed over the coming years, in terms of coal supply and set up of new plants along with instant commissioning of the planned but delayed or the canceled projects.

The country has launched several indirect and direct coal gasification and liquefaction projects recently in 2017 in Inner Mongolia, Shaanxi, Ningxia, Xinjiang, and Liaoning, which are part of their clean energy strategy. A December 2017 report from China Petroleum and Chemical Industry Federation (CPCIF) stated that the country’s CTL efficiency increased by a significant average of 20.4%, which has added significant value to the global industry’s value chain.

Diesel, gasoline, and other fuels including kerosene are the synthetic fuels produced from the coal liquefaction process. Diesel was the leading product segment in 2017 with a market share of 58%. The gasoline segment is expected to witness a significant rise soon, however, diesel will lead the production side for the next few years as diesel is the most preferred fuel to be produced from the liquefaction process.

Direct Coal Liquefaction (DCL) process is used in several CTL plants globally. It is suitable and beneficial for several wide ranges of feeds including high-velocity bituminous coals, sub-bituminous coals with low cash, and lignites with low cash. Indirect Coal Liquefaction (ICL) is the most used process and was the largest technology segment. In this process, solid coal is passed into a gas phase process before it is converted into a raw liquid form. 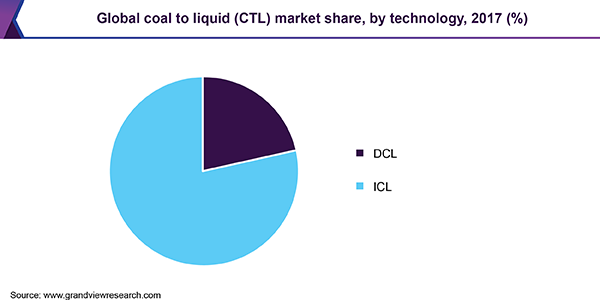 Developed in Germany, this is a patented technology by Franz Fischer and Hans Tropsch and later named as the Fischer-Tropsch (F-T) process. In this process, the syngas i.e. synthesis gas is made up of carbon monoxide and hydrogen. This is then reacted over an F-T catalyst to form a liquid hydrocarbon resulting in a wide array of hydrocarbon fuels and other products, such as gasoline, methanol, diesel, and other chemicals.

Most of the leading technological developments were considered to have taken place in North America. However, APAC led the global CTL market with the highest fuel production and accounted for over 45% of the overall market share in 2017, in terms of revenue. It is likely to expand further as many industry participants are focusing on opening up CTL facilities in the Asian countries due to maximum growth opportunities, in terms of regulatory framework and economics. Moreover, the region is home to over twelve CTL plants.

The majority of the CTL plants are concentrated around China and a few in India and Indonesia. China has five operating facilities with a maximum production capacity in the region. In Indian, there are three operating projects. Asia Pacific is the most lucrative geographical location for the industry participants because the capital expenditure or CAPEX for CTL plant setup of any capacity is only 70%.

The market is moderately competitive. Several restraints are currently affecting the industry in the low crude price era. The high cost is a major obstacle for the development of CTL technology and hence commercialization of it has not increased during the past decade as it should have been in respect to the technology’s contribution towards minimizing the dependency on crude oil. Some of the dominant industry participants include China Shenhua Energy Co. Ltd.; Sasol Ltd.; TransGas Development Systems, LLC; Altona Energy PLC; and Envidity Energy, Inc.

This report forecasts volume and revenue growth at global, regional, and country levels and provides an analysis of the latest industry trends in each of the sub-segments from 2014 to 2026. For this study, Grand View Research has segmented the global coal to liquid (CTL) market report based on the product, technology, and region: