The global cognac market size was valued at USD 3.88 billion in 2019 and is expected to grow at a compound annual growth rate (CAGR) of 3.5% from 2020 to 2027. Increasing acceptance for premium alcoholic drinks among the millennials on a global level is expected to expand the market scope in the next few years. A major factor influencing the growing popularity of the craft product is its exclusivity of production. In a fashion similar to champagne, cognac’s production is strictly limited to its production region Cognac. As a result, the grapes for manufacturing cognac all come from the same area and such products are influenced by the soil of the region. Over the past few years, the consumption of alcoholic drinking has become a social norm during specific events and occasions in North America and Europe. Most employees after work during Friday evenings prefer enjoying a drink with friends and colleagues. Similarly, students on campus are being noticed following a strong drinking culture. 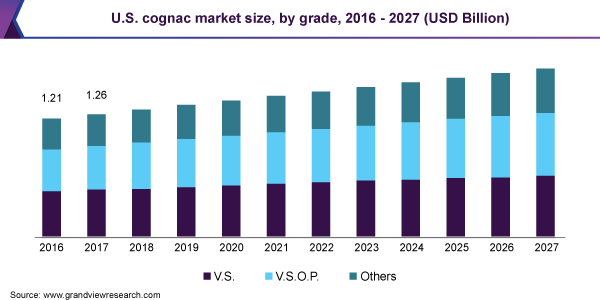 Additionally, alcoholic drinks are considered to be an excellent anxiolytic, and thus a major part of the generation X and Y can be seen enjoying a sip or two as a stress buster. Cognac is generally enjoyed either neat as a single vintage or in blends. The taste and flavor of cognac are dependent on the cellar master’s understanding of Eau-de-vie’s maturity. It generally has a complex flavor and hints of vine flowers, toasted bread, vanilla, cinnamon, dried apricots, candied fruits, chocolate, leather, port, toffee, and spices. Thus, even though it is a type of brandy, its exclusivity lies in its flavor sensation. To decide the taste of cognac, cognac wheel is used, which includes spring, summer, autumn, and winter as the major categories.

Furthermore, the consumption of cognac in cocktails has been more than its neat consumption. Some of these popular blends are Almond Crusta, Bermuda Highball, Sidecar, Bamboo #2, Fleur de "Lees", French 75, Sazerac, Mata Hari, Mr. Tallymon, Nick & Janae, and Vieux Carré. Thus, the cognac houses have been creating products with flavors that complement the cocktail.

V.S. led the market and accounted for more than 50.0% share of the global volume in 2019. This is attributed to the constant demand for new products among customers. In February 2020, Courvoisier S.A.S. launched Avant-Garde Bourbon Cask Edition, which is derived from Courvoisier VS liquid and is further finished in Kentucky Bourbon casks. The product is bottled at 40% ABV, with the notes of vanilla, honey, and sweet marmalade and priced at USD 39.99.

V.S.O.P. is expected to expand at the fastest CAGR of 6.7% from 2020 to 2027 in terms of volume. Various product launches are contributing significantly to the growth of the segment. For instance, in November 2019, Altia launched a limited-edition cognac under its Larsen brand. TheVSOP Double Toasted cognac has been aged in twice toasted handcrafted barrels. The additional charring induces a sweet aroma of vanilla, toffee, and other roasted notes. It contains 40% ABV and is available for sale in Finland and Norway. A 500mL bottle is priced at EUR 38.

Off-trade led the market and accounted for more than 55.0% share of the global volume in 2019. Consumers prefer buying drinks from various liquor stores as these come at a cheaper price than most other on-trade distribution channels. Furthermore, people fond of collecting and tasting different brands prefer buying from off-trade channels. 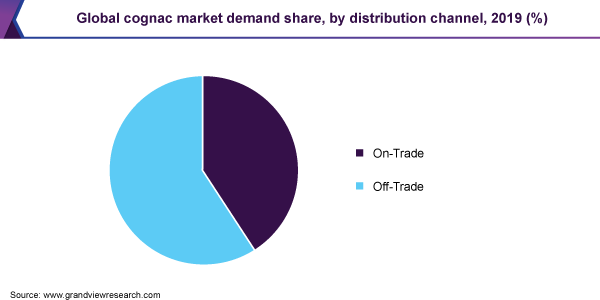 On-trade is expected to register the fastest CAGR of 6.4% from 2020 to 2027 in terms of volume. The get together in bars, restaurants, and various other eateries have enhanced the sale from on-trade channels. Furthermore, certain dishes and recipes sold in the fine-dine restaurants go extremely well with the cognac, thus fueling cognac demand. Along with that, the demand for various cocktails is adding on to the growth of the channel.

North America dominated the market and accounted for over 35.0% share of the global revenue in 2019. This is attributed to the various strategies implemented by the industry in the region. For instance, in December 2019, Courvoisier entered into a partnership with New York City-based designers, Public School. Similarly, in February 2020, Hennessy entered into a partnership with the NBA, Women’s National Basketball Association (WNBA), and USA Basketball. The brand has become the official spirit partner and is better positioned to reach and engage with a broader segment of basketball fans around the NBA’s marquee moments.

Asia Pacific is expected to expand at the fastest CAGR of 4.0% from 2020 to 2027 in terms of revenue. The brand owners in the region have been pondering over getting rid of the traditional label and beginning with age statements. It is expected that the improvement in the label will aid the understanding and stability of cognac, which will further help in enhancing the sales. Courvoisier has already dabbled with this, by launching its 12 and 21 range.

The town Cognac is home to over 283 Cognac houses, but a substantial part of the market is dominated by the big four of the industry, namely Hennessy (LVMH), Rémy Martin, Martell (Pernod Ricard), and Courvoisier. These international brands have a widely spread distribution channel and a large number of loyal customers, resulting in their massive market. In contrast, during the last couple of years, other houses can also be seen picking up the pace by creating new products. In December 2019, D’Ussé, a brand owned by Jay-Z, launched a new cognac brand bottle, D’Ussé 1969 Anniversaire. The product is bottled from a single barrel, which is matured in the cellars of Château de Cognac, France. Some of the prominent players in the cognac market include:

This report forecasts volume and revenue growth at the global, regional, and country levels and provides an analysis of the latest industry trends and opportunities in each of the sub-segments from 2016 to 2027. For the purpose of this study, Grand View Research has segmented the global cognac market report on the basis of grade, distribution channel, and region:

How big is the cognac market?

What is the cognac market growth?

Which segment accounted for the largest cognac market share?

b. North America dominated the cognac market with a share of 39.2% in 2019. This is attributable to the predominant consumption of premium alcoholic drinks among millennials in countries such as the U.S. and Canada.

Who are the key players in the cognac market?

What are the factors driving the cognac market?

b. Key factors that are driving the market growth include increasing acceptance for alcoholic drinks, growing popularity of the craft product, and shifting trend towards drinking during specific events and occasions.