The global cognitive radio market size was valued at USD 5.5 billion in 2021 and is expected to expand at a compound annual growth rate (CAGR) of 18.6% from 2022 to 2030. The promising growth prospects of the market can be credited to the evolution of the latest technologies, such as 5G, and the increased adoption of cognitive radios in defense and government organizations. Optimized spectrum usage and power consumption have led organizations to adopt cognitive radios to meet technological requirements. 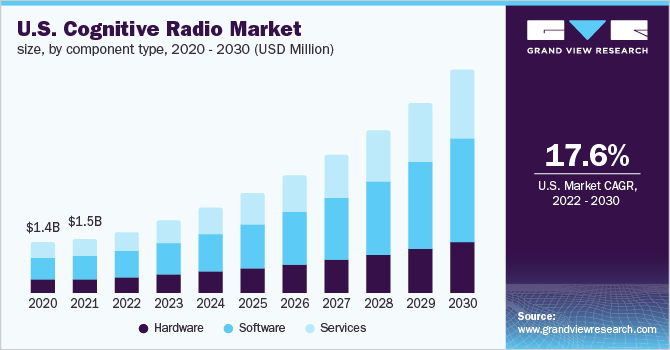 Integrating cognitive radios with cloud computing and the internet of things (IoT) is expected to play a significant role in adopting cognitive radios. IoT devices have gained traction in the world of communication in recent years as the devices are being combined with the internet for operations. IoT devices are expected to collect or exchange data using limited resources, wherein spectrum utilization is one of the critical aspects. The cognitive radio plays a vital role in wireless communication as it uses the vacant part of the spectrum for a wireless communication system. The integration with cloud computing helps improve the performance of cognitive radio networks without affecting security, and the integration also enhances the accessibility of the platform.

The emergence of 5G technology is expected to play a crucial role in driving the global growth of the market for cognitive radio. The increasing adoption of mobile phones, advancements in wireless communication devices, and continuous surging data traffic, data traffic, and improved network performance in data capacity, energy utilization, bandwidth utilization, delay, throughput, and cost have led to the emergence of the 5G network.

The software segment is expected to witness a CAGR of nearly 20.0% over the forecast period. The growth can be attributed to the increasing adoption of software-based cognitive radios in defense and government organizations and the emergence of 5G as a software-based cognitive radio that provides a novel network resource management framework to overcome several challenges related to network resource management. For instance, In April 2022, Raytheon Missiles and Defense, a subsidiary of Raytheon Technologies Corporation, was awarded a contract of a total of USD 1.68 million across five years by the U.S. Navy. The contract is expected to develop further warfare capabilities and technology and introduce three Zumwalt-class destroyers.

The telecommunication segment is expected to witness the highest CAGR growth of more than 19.0% from 2022 to 2030. The segment's growth is majorly attributed to the emergence of 5G technology. The cognitive radio provides a favorable atmosphere to implement 5G technology as it meets the capacity demand of the spectrum of 5G wireless communication. The defense and government segment is expected to acquire nearly 34% of the market share by 2030 owing to the increased demand for the latest technologies in the defense and government sector.

In March 2021, Shared Spectrum Company and InterDigital, Inc. were given a contract to enable dynamic spectrum sharing between 5G cellular and Air Force radars at Utah's hill air force base. The contact has developed technologies to develop 5G-enabled dynamic spectrum sharing. The demand for cognitive radio is increasing in healthcare, logistics and transportation, and other sectors resulting in promising growth of the overall market for cognitive radio during the forecasted period.

The spectrum sensing segment is expected to expand at a CAGR of nearly 20.0% from 2022 to 2030. The growth is attributed to the application's key feature to prevent harmful interference with licensed users and improve spectrum utilization by identifying the available spectrum. The increased implementation in defense and government organizations and the further technological developments such as IoT integration are expected to enable more features resulting in wide adaptation of spectrum sensing for various applications. Furthermore, the application of spectrum sensing in power grid communication systems to fulfill the large-capacity data transmission needs and improve the quality of communication is expected to boost the growth of the market for cognitive radio. 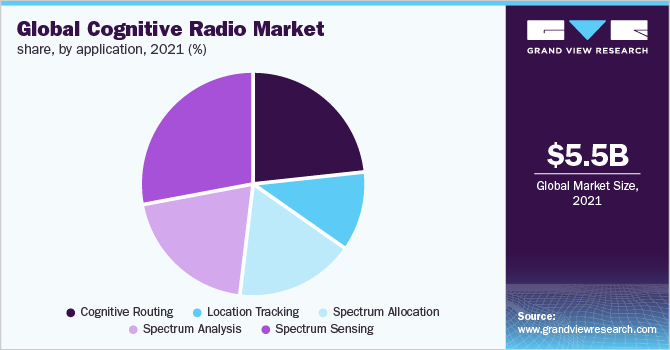 Asia Pacific is expected to witness the highest CAGR of nearly 21.0% during the forecasted period. The emergence of 5G in the Asia Pacific region is expected to increase the adoption of cognitive radios in the telecommunication sector. Furthermore, the increasing number of advanced transportation sources such as smart railways in countries like Japan, China, and India is expected to fuel market growth in the region resulting in promising growth of the cognitive radio market over the forecasted period.

In North America, the market is expected to witness a significant CAGR of approximately 18.0% over the forecasted period. The favorable initiatives by the government authorities are paving the way for remunerative growth opportunities. In May 2021, the Canadian government announced the provision of the spectrum to promote competition in the wireless services market while enhancing rural connectivity and ensuring an effective component of 5G technologies. The government announced repurposing the spectrum band of 3800 MHz to support 5G services. Moreover, The rapid expansion of the telecom sector and the ongoing development of the 5G network in the region contribute to the market expansion in the forecasted period.

The major players in the market for cognitive radio are focusing on developing strategic partnerships to secure government contracts. For instance, In October 2021, Sierra Nevada Corporation (SNC) and BAE Systems partnered to secure the contract for the Global High-altitude Open-system Sensor Technology (GHOST) program to deliver a next-generation prototype design for the open architecture signals intelligence technology to the U.S. Air Force.

Moreover, the key market players are also focusing on acquiring local players to expand their presence and strengthen their footprints in the market. For instance, In May 2022, Thales Group announced the acquisition of Excellium and S21sec, cybersecurity companies. The acquisition has helped them expand their footprint in Portugal, Spain, Belgium, and Luxembourg and accelerate its cybersecurity development roadmap. Additionally, In May 2022, Thales Group announced the acquisition of RUAG S&T to provide advanced services and solutions for the combat readiness of land forces. The acquisition has helped Thales strengthen its footprints in Switzerland, Australia, France, the U.K., Germany, and the UAE. Some of the prominent players in the global cognitive radio market include:

This report forecasts revenue growth at global, regional, and country levels and provides an analysis of the latest industry trends in each of the sub-segments from 2018 to 2030. For this study, Grand View Research has segmented the global cognitive radio market report based on component, application, end-use vertical, and region:

What are the factors driving the cognitive radio market?

How big is the cognitive radio market?

What is the cognitive radio market growth?

Which segment accounted for the largest cognitive radio market share?

Who are the key players in cognitive radio market?