The global coin-operated laundries market size to be valued at USD 30.1 billion by 2027 and is expected to grow at a compound annual growth rate (CAGR) of 9.4% during the forecast period. Laundry is a time-consuming task and has become a burden for people, especially the working-class population. Time constraints due to increasing work pressure and hours restrict people from doing their laundry. The working-class population has significantly increased over the past few years, thereby contributing to the rising demand for coin-operated laundries due to their convenience. The market is mainly driven by the increasing number of working women worldwide. 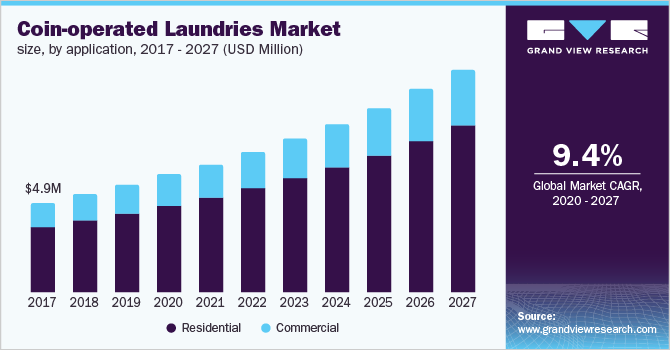 According to statistics provided by the World Bank, the female labor force has been substantially increasing since 2012. In 2016, females accounted for a share of about 38.9% of the total labor force worldwide; the percentage increased to 39.1% in 2017. These factors are opening new avenues for coin-operated laundries and are likely to fuel the market growth during the forecast period.

Key consumers of these services include millennials, college graduates, and working professionals, boarding schools, colleges, and hostels are some of the potential customers for online service providers. Laundry services in developing countries, such as India and South Africa, are primarily catered by the unorganized sector. Improving the standard of living, coupled with rising disposable income, is expected to drive the market during the forecast period.

Moreover, increasing Internet penetration in developing countries, such as India and China, has driven the market for online services. In 2017, China had the highest internet penetration rate, followed by India and the U.S. In addition, with the rising number of double-income households, the purchase of expensive and delicate fabric apparel has increased. Thus, the abovementioned factors are expected to drive the market.

With improving living standards across the globe, millennials and the working-class are becoming more health-conscious. Choosiness for apparel, household linen, and furniture has increased. Customers prefer buying and wearing more expensive, clean, and well-ironed apparel. Over the past few years, spending on clothes has significantly increased, which in turn has raised the demand for laundry. Although conventional coin-operated laundries are available across the globe, they have limited applications. This has created new avenues for coin-operated laundries across the globe.

The young population, millennials, and working-class are attracted to these coin-operated laundries owing to a high degree of conveniences, such as round-the-clock-service, doorstep pickup and delivery, and complete service within 24 hrs. Moreover, service providers offer heavy discounts to customers, especially during the first service. These benefits are increasing the adoption of coin-operated laundries.

Laundry is a time-consuming task particularly in the urban areas. Other commitments like job, meetings, and other professional areas where time is of huge significance, cloth hygiene plays an important role. For instance, a lot of the young population residing in urban areas juggles between jobs and personal errands resulting in time limitations. Owing to its convenience, the coin-operated laundries have grown in popularity among the millennial in the recent years. Moreover, the increase in the number of working women is expected to fuel the market growth.

On contrary, the coin-operated laundries incur maintenance wherein the chances of equipment failing is high thereby making it difficult for employees or business owners to deal with. Therefore, alternatives such as card-operations have enabled ease and convenience making it simpler to track and record the revenue. Therefore, the emergence of card-operated laundries is anticipated to disrupt the market growth.

In terms of revenue, residential application dominated the market with a share of 79.8% in 2019. This high share is attributable to the increasing consumer preference for professional cleaning due to rising health concerns with regard to personal hygiene and cleanliness. In addition, the rise in nuclear families is an advantage for the global market as the number of family members is less, and availing online laundry services is economical than buying and using washing machines at home. An increasing percentage of the millennial population has started availing online laundry services owing to a rise in disposable income and convenience associated with the use of online services. This can be attributed to the rising costs of electricity, time constraints in the case of working couples, and the increasing trend of apartment-style living.

An increase in the number of hotels and hospitals is expected to provide growth opportunities to online laundry service providers over the forecast period. These service providers offer free pickup and doorstep delivery, which positively influences the market. Doorstep delivery of clothes not only saves time but also the additional cost if any. Moreover, availing such services saves the cost required for the maintenance of the washing machine as well as reduces human efforts, thus driving the coin-operated laundries market over the forecast period.

North America dominated the market with a share of 45.3% in 2019. This is attributable to the growing population of health-conscious consumers in the region has significantly increased the use of laundry services. Increasing preference for fragrant laundered clothes, particularly in developed economies, has increased the demand for fragrant cleaning products. The increasing number of commercial facilities that use online laundry services, especially in the U.S. and Canada, are contributing to the region’s market growth. Local presence of key global players related to coin-operated laundries and increasing collaborations and partnerships between companies and hotels is expected to favor the market in the coming years. 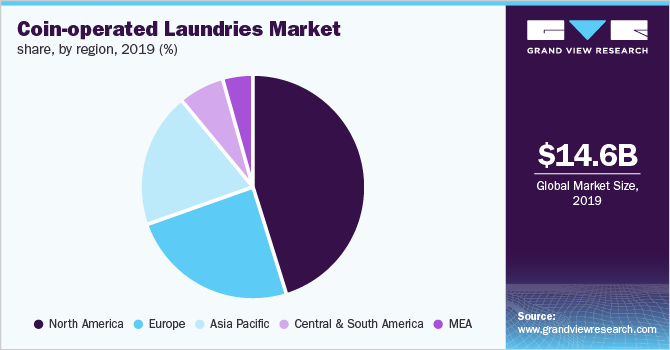 Asia Pacific is expected to exhibit the fastest CAGR over the forecast period owing to improving economic stability and living standards in developing economies, such as India, China, and Indonesia. These factors are expected to propel the demand for online laundry service over the forecast period. Asia Pacific is one of the most lucrative regions for online laundry services, owing to growing middle-class and millennial demographics. Moreover, the region’s dense population is a major factor for market growth. According to a UN report, titled World Population Prospects 2019, the population of Asia (except Western Asia) is expected to grow from 4.3 billion in 2018 to 4.7 billion by 2030. These factors are likely to make the Asia Pacific a high potential market for coin-operated laundries in the near future. 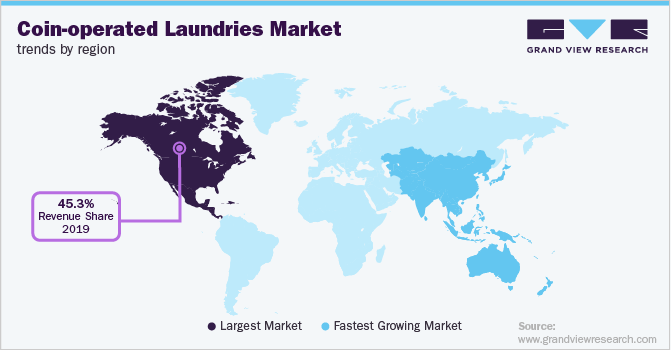 The market is highly competitive in nature with the presence of a large number of domestic and international players, thus resulting in a fragmented nature. Companies are focusing on investing in R&D activities and are launching their services in new countries to gain a competitive edge. The market still witnesses moderate to low entry barriers owing to fewer investments, regular funding, and an owner-free business model by connecting consumers with regional laundry service providers. These factors have enabled many startups to enter this market.

Some of the prominent players in the coin-operated laundries market include:

This report forecasts revenue growth at global, regional, and country levels and provides an analysis of the latest industry trends in each of the sub-segments from 2016 to 2027. For the purpose of this study, Grand View Research has segmented the global coin-operated laundries market report on the basis of application and region: 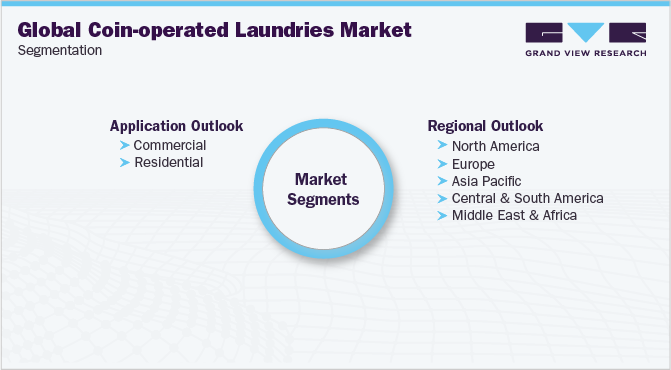 How big is the coin-operated laundries market?

What is the coin-operated laundries market growth?

Which segment accounted for the largest coin-operated laundries market share?

b. North America region dominated the coin-operated laundries market with a share of 45.3% in 2019. This is attributable to the high demand of consumers to avail of convenient services, especially among the working professionals.

Who are the key players in the coin-operated laundries market?

What are the factors driving the coin-operated laundries market?

b. Key factors that are driving the market growth include high demand from a wide range of hotels, hospitals, restaurants, and other such businesses and the availability of new product development and outlets for convenient laundry for the consumers.