The global commercial aircraft landing gear market size was estimated at USD 6.18 billion in 2019 and is expected to witness a compound annual growth rate (CAGR) of 7.5% from 2020 to 2025. The expansion in the fleet size of major airlines and the surging growth in the commercial aviation sector is expected to drive the demand for new airliners and consequently for the landing gears.

The civil aviation sector is poised to witness significant growth due to the increased production of next-generation aircraft. Improvements in the global economic conditions have led to an increase in the air passenger traffic worldwide. There has been a steep increase in the number of commercial airplanes to cater to the increasing air travel demand. This growth in the number of commercial aircraft is expected to drive the commercial aircraft landing gear systems’ demand. 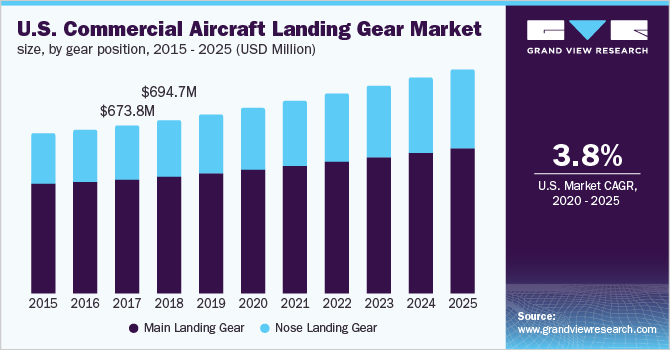 Airplane manufacturers are now using lightweight materials, electronic technologies, and new innovative solutions for optimizing the overall aircraft performance during touchdown and reducing the aircraft downtime. These new systems require a lower degree of maintenance as compared to their traditional counterparts. The increasing need for more fuel-efficient and eco-friendly airliners to replace the older ones is expected to drive the industry over the next eight years.

The global commercial aircraft landing gear industry is expanding rapidly. Technologically advanced control systems are now increasingly replacing manually-controlled hydraulic as well as mechanical systems. Moreover, the competition among the industry incumbents present across the value chain is increasing at a considerable rate.

The global industry is transforming in accordance with the changing global economy. However, challenges, such as increasing energy costs, expensive raw materials, and the U.S. dollar inflation, are expected to challenge the industry growth in the near future. In an effort to overcome these obstacles, various players across the value chain, from OEMs to component & raw material suppliers, have started developing new business processes to benefit from the rapid globalization of the industry.

The commercial aviation industry has been perilously placed since 2008 when the oil prices skyrocketed to almost USD 150 a barrel. This consequently resulted in a decline in the passenger numbers along with a fall in the aircraft production level. Recent times have witnessed a rise in the number of passengers in commercial aviation as the oil prices have started to stabilize. The growing power bestowed on the middle-class population in the developing economies and the mounting global economy has emerged as the dominant driving factors for the growth of commercial aviation, thereby fueling the demand for landing gears.

In January 2016, Iran completed a USD 25 billion deal to acquire 118 aircraft from Airbus. This deal itself designates the growing expansionist attitude to fleet the acquisition and aircraft segment expansion trend in the prevalent industry. Estimates from the stakeholders for the aviation industry progression in 2016-17 have, therefore, been predictably optimistic.

Around 3 billion people in the Asia-Pacific region are anticipated to enter the middle class by 2030. The Asia-Pacific region is anticipated to witness a sturdy growth in the commercial aviation sector, owing to the fact that the world’s major air traffic would be located there. A major chunk of this population would be across the Asia-Pacific region as budget carriers would service the novel cost sensitive middle class. The major returns on investment are expected from pilot training schools, providing the Asian budget carriers with their qualified commercial pilots. The expansion in the fleet size of major airlines and the surging demand for commercial aviation is expected to drive the demand for new aircraft and ultimately for the landing gears.

The study includes an in-depth analysis of the market data for the two primary gear types, namely main and nose landing gear. Main landing gears are estimated to dominate the market over the next eight years as they constitute one of the primary requirements for aircraft. Nose landing gears are also projected to exhibit considerable growth, with the segment anticipated to grow at a CAGR of over 8% from 2017 to 2025.

Landing gear manufacturers are substantially increasing investments in new touchdown sets for exchange purposes. Airline operators are now becoming more reluctant to purchase spares of these systems, mainly due to high cost. Majority of the airlines prefer to rely on the pool items and short-term leases. The increasing demand for MRO has made it difficult for OEMs to support their products due to low capacity and is thus expected to drive the revenues for line-fit system providers.

The various components scrutinized in the report include steering system, wheel & brake system, actuation system, and others. Electronic control systems are now increasingly replacing hydro-mechanical systems owing to their inherent advantages such as high accuracy and the capability to make changes in various design parameters, including steering ratio and steering rate. There has been a similar trend in the braking systems segment, wherein conventional mechanical braking systems are being replaced by electronic systems. 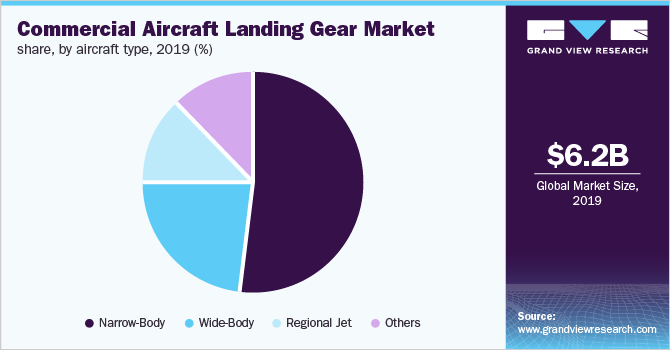 Although a majority of airliners have a steerable nose gear, some airplanes do not possess the ability to steer the nose gear. In such cases, the steering operation is accomplished with the help of differential braking during taxi. Heavy airliners are typically equipped with the hydraulic power to steer the nose gear. The touchdown systems are precisely designed to reduce the ground loads transmitted to the airframe. Some airplanes employ semi-active and active shock absorber systems to improve the overall landing gear performance.

The various aircraft types covered in the report comprise narrow-body, wide-body, regional jet, and others. Narrow-body is expected to emerge as the leading segment over the forecast period. Rising passenger traffic in Low-Cost Carriers (LCCs) and growing number of high-density flights between major airports are expected to drive the demand for such aircraft.

Airlines across the developed economies, such as the U.S. and Germany, are facing growing competition from LCCs, as these carriers are transforming older, fuel-inefficient airplanes with new economic single-aisle models. Moreover, increased demand for the replacement of aging airliners, especially in the emerging markets, is expected to further drive the need for commercial airplanes over the forecast period.

The tricycle is the most widely used arrangement type globally as it provides better visibility from the flight deck during ground maneuvering. Such an arrangement provides a safe distance between the other aircraft’s components, such as fuselage and wings, when the airplane is on the ground. The tricycle segment accounted for the largest market share in 2016 and is presumed to retain its dominance over the forecast period.

The tandem segment is poised to witness the highest growth over the forecast period as it allows the use of flexible wings with the gears under the fuselage. In such an arrangement, the tail gears and main gears are aligned on the longitudinal axis of the airplane. Few airliners, including sailplanes, are designed with tandem gears. The tailwheels segment accounted for a little over 10% of the overall market share in 2016; these landing gears are mostly used in traditional or small airplanes.

As per the International Air Transport Association (IATA), the global air passenger traffic has increased by 6.3% in 2016 as compared to the previous year. The global airplane connectivity has substantially increased with the establishment of more than 700 new routes. The demand for air travel is expanding aggressively in many developing countries, such as India, Malaysia, China, and Thailand, which in turn has led to a growing demand for landing gear systems across the geographies.

The Asia Pacific region is projected to exhibit significant growth over the next eight years. The demand for commercial aviation is increasing as a result of growing income levels of the middle-class society, thereby making flying more affordable. The region is expected to achieve unprecedented long-term growth in commercial aviation. This growth is anticipated to generate substantial economic impacts from the commercial aerospace and facilitate a general growth in developing economies from the catalytic effect of increased global connectivity.

Asia Pacific is presumed to emerge as the pre-dominant region over the forecast period due to growing the demand for commercial aircraft across developing countries, such as Japan and India. The region accounted for 43.3% of the overall market share in 2019 and is presumed to reach 47.4% by 2025.

The global commercial aircraft landing gear market is dynamic in nature. Companies within the marketplace are transforming their products and solutions to provide cost-effective systems to aircraft manufacturers. The key manufacturers are increasingly forming long-term agreements with suppliers to manage their profit margin and inventory flow effectively.

This report forecasts revenue growth at global, regional & country levels and provides an analysis on the industry trends in each of the sub-segments from 2014 to 2025. For the purpose of this study, Grand View Research has segmented the global commercial aircraft landing gear market on the basis of gear position, component, aircraft type, arrangement type, and region: