The global commercial food dehydrators market size to be valued at USD 868.4 million by 2025 and is expected to grow at a compound annual growth rate (CAGR) of 7.1% during the forecast period. Increasing demand for longer shelf life of eatables along with increasing disposable income are expected to drive the market during the forecast period. Moreover, growing awareness regarding food wastage is expected to increase the demand for commercial food dehydrators. One-third of the total food produced around the globe remains unconsumed and is thrown away. Numerous initiatives have been taken by the government and numerous organizations. These organizations use dehydrators to preserve unconsumed food which is provided to areas suffering from natural disasters or hunger. These appliances are also used by the restaurant owners to avoid spoiling of unused eatables. 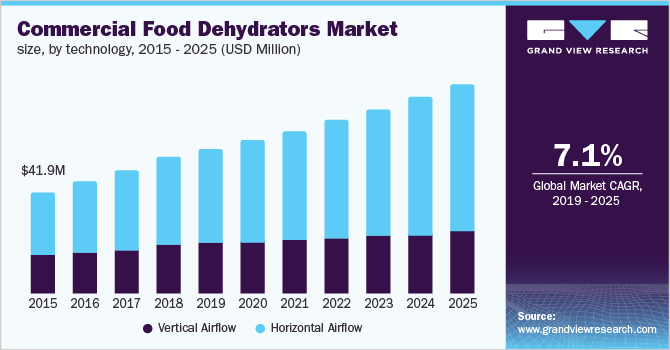 Increasing population and rising disposable income are expected to drive the demand for processed eatables during the upcoming years. In order to meet increasing consumer demands, food processing companies are expected to expand their businesses and boost the market for commercial food dehydrators over the forecast period. This demand is elevated by campaigns to avoid wastage of eatables.

Food contains high amount of water including over 85% in fruits and over 65% in meats. Food dehydrators support the market players in trading as it reduces the size and weight of the eatables, significantly. This enables the producers to import and export different types of eatables in higher quantities, which can be used after rehydration. The market players involved in food trade are expected to further boost the market.

The drying of eatables has been practiced since 12,000 B.C., which involved the traditional method of drying the eatables under the sun. However, it resulted in the eatables losing their vital nutrients, and over heating also resulted in hardened items that are moist from inside making it vulnerable to spoiling. Food dehydrators provide dried eatables without affecting their nutrient content and original flavor.

The expanding commercial food market and increasing concern about food waste are primarily driving the need for food dehydrators. There is also a rise in demand for food products with longer shelf lives and restaurant owners' are increasingly using food dehydrators to preserve food and prevent wastage. The market is predicted to develop faster as the number of catering operations is increasing with the expansion in sales of the restaurant industry.

Exporting enterprises use them widely for dehydration and food shipment. This aids trade as it saves storage space and lowers the weight of the product. The emergence of new advancements and higher product standards are projected to help accelerate the growth of the market.

Emerging technological advancements that enable efficient production, expanded product line, effective operation system, sales monitoring, and sophisticated packaging are among the other factors boosting the demand for food dehydrators. Moreover, various initiatives have been taken by the governments and non-governmental organizations to keep leftover food in dehydrators before distributing it to communities that are hit by natural calamities or food shortages. Thus, such initiatives are also projected to fuel the market growth.

Compliance with strict laws and various standards around the world, increasing competition, fluctuating prices of raw materials, and expected inflation in major countries during the forecast period, are factors hampering the growth of the market.

The position of the fan creates an airflow mechanism that helps the moist and warm air to exit from the device and let fresh air in to increase the rate of evaporation. The dehydrator consists of a heating element that heats the food at the required temperature, which pulls the moisture to the surface. This surface moisture eventually evaporates and passes through the air vents with the support of the fan. 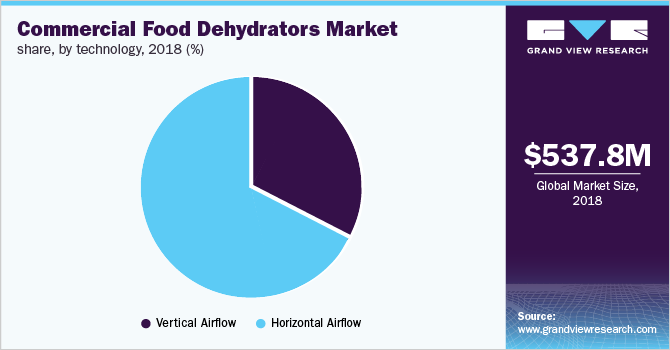 The horizontal airflow technology segment dominated the commercial food dehydrators market and accounted for 67.7% of the market share in terms of revenue in 2018. The horizontal airflow creates a uniform impact on the food and does not require to shuffle the trays regularly. Horizontal airflow is widely used as there are very low chances of different flavors being mixed with each other. Moreover, these appliances are easy to use owing to their construction and shape.

Europe emerged as the leading regional market and accounted for 35.2% revenue share in 2018. The region is expected to dominate the industry on account of several factors including rapidly growing agriculture and food service establishments. Moreover, increasing demand for eatables with longer shelf life coupled with increasing disposable income is expected to boost the demand for commercial food dehydrators in the region. 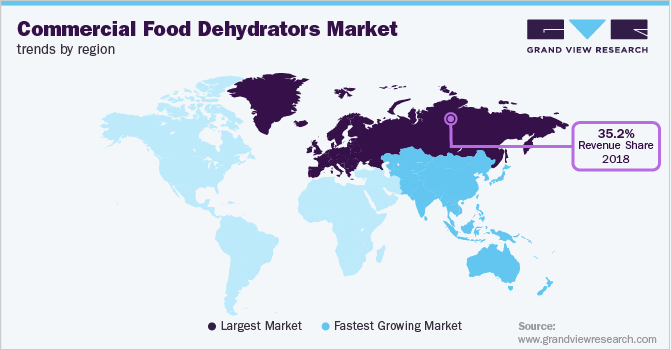 The Asia Pacific market was the second-largest market for commercial food dehydrators in 2018 but is expected to take the lead by 2025 owing to increasing awareness regarding food wastage, high agricultural production, and increasing exports of eatables especially fruits and vegetables. Rapidly growing food service establishments are expected to further fuel the demand for commercial food dehydrators in the Asia Pacific region.

The Central and South America market is anticipated to witness a significant CAGR of 7.1% over the forecast period owing to high agricultural production and low consumption especially in Brazil and Argentina. A large consumer base and increasing adoption of food preservation techniques especially solar based commercial food dehydrators are expected to further drive the market for commercial food dehydrators in the region.

The growth rate of the market in the Middle East and Africa is expected to slow down owing to huge imports of eatables including fruits and vegetables. These products are dehydrated by the exporters and thus reduces the requirement for commercial food dehydrators in this region. In addition, the Middle East and Africa region is expected to grow owing to agricultural production in countries including Egypt, Tanzania, and Ethiopia.

This report forecasts market share and revenue growth at global, regional, and country levels and provides an analysis of the latest industry trends in each of the sub-segments from 2014 to 2025. For the purpose of this study, Grand View Research has segmented the global commercial food dehydrators market report based on technology and region: 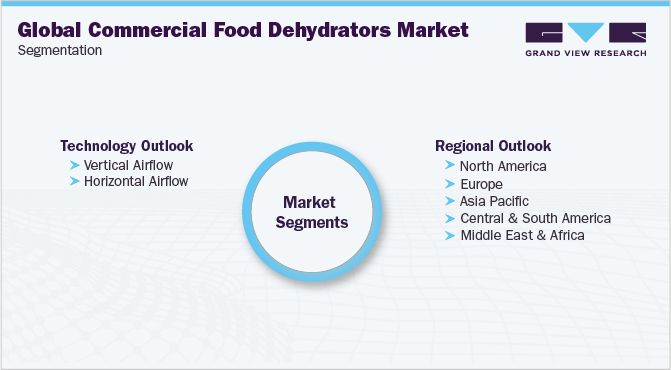