New advancements in molecular biology have facilitated cheaper and faster mapping of genetic codes of plants. Farmers can efficiently cope with major agricultural challenges, such as high demand by increasing their production through Genetically Modified (GM) seeds. As a result, there is a significant demand for biotechnology seeds owing to their great efficiency in agricultural production. 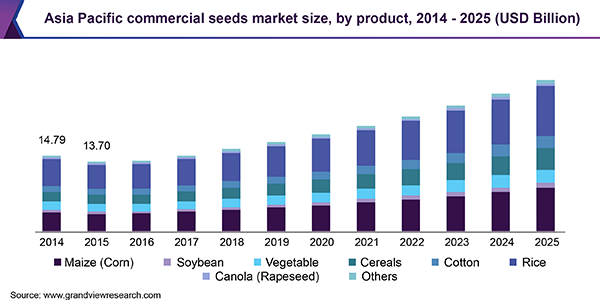 Major countries to have adopted cultivation of GM crops are U.S., Brazil, Argentina, Canada, and India. The market for GMO crops represented more than 10.0% of arable land in 2016, with strong variation between different regions. For instance, there is extensive cultivation of GM crops in U.S. while there are significant restrictions for its production in countries like Russia, Turkey, and Saudi Arabia.

The climate change caused by significant emission of methane and nitrous oxide from agriculture poses a significant barrier to growth of the commercial seeds market. The digestive processes of ruminant animals and rice cultivation are majorly responsible for methane emissions by enteric fermentation. According to the World Resources Institute (WRI), significant strategies must be adopted to reduce the greenhouse gas emissions from agricultural production to tackle climate change.

Maize (corn) was estimated to hold the highest market share of 40.2% in 2017. Corn is also used for animal feed and its demand is expected to grow on account of rising meat consumption, especially from emerging markets. Moreover, the extensive utilization of corn products for manufacturing starch and sweeteners is also expected to propel the segment growth over the forecast period.

Soybean is predicted to expand significantly at a CAGR of 8.3% during the forecast period. The extensive extraction of oil from soybean coupled with its high protein content is estimated to drive its demand. Soybean is prominently used for animal feed. It is also used as a direct food source and as a raw material in a variety of industrial food products.

Wheat accounts for the major crop production area accounting for about 68.0% of global cereals production. With around 80.0% of the crop being used for food, wheat consumption is driven primarily by population growth. China is the major producer of wheat globally. Major exporters are the CIS, United States, Canada, and the European Union.

Rice is the most important staple food for a large part of the world’s human population. Growth in demand for rice is expected to be around 1.0% per annum. Moreover, it is correlated to population growth. There is a lucrative market for rice segment in Asia owing to its significant consumption as a food source. However, substantial reliance on labor for rice production and low yield productivity are some of the barriers for growth.

GM maize segment was the largest contributing segment in 2017 with a revenue share of 46.5%. The increased hectarage witnessed by the genetically modified maize owing to the favorable market prices, demand for biofuel and animal feeds, as well as the increased European corn borer infestation in parts of Europe were the significant factors for its dominance in 2017.

GM cotton segment is projected to register the highest CAGR of 9.8% during the forecast period. Increased yield of cotton, potential savings in the cost of cultivation, and reduced insecticide use in its cultivation facilitate the segment growth. U.S., China, and India are the major countries to have adopted GM cotton seeds. 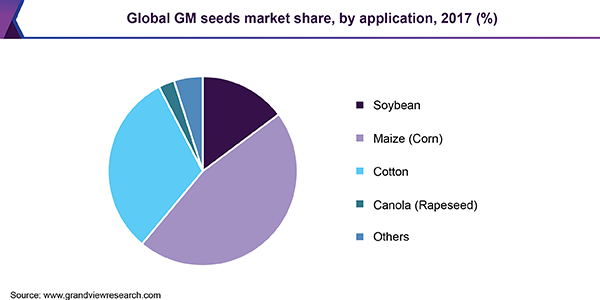 Adoption of GM soybean was maximum in the South American countries in 2017, especially in Brazil where this crop was cultivated in an area of 20.25 million hectares. Other significant markets for GM soybean include U.S., Argentina, Paraguay, Canada, Uruguay, Bolivia, and smaller hectarages in South Africa, Mexico, Chile, and Costa Rica.

GM canola segment is mainly driven by increasing demand for edible oil from U.S., Canada, and Australia. In addition, utilization of canola for biodiesel is also expected to drive the segment growth.

North America held the dominant market share of around 32.0% in 2017. Extensive R&D, supportive government regulations, and cost-effectiveness of commercial seed are expected to drive regional market growth. The emergence of precision farming has resulted in gathering of more detailed data by the farmers. This is anticipated to improve the awareness regarding these seeds among farmers.

Central and South America is anticipated to expand at the fastest CAGR of 10.7% over the forecast period. Agriculture is an important component of the region’s economic system owing to a wide range of farming structures and practices, from smallholders in Central America to professionalized mega farmers in Brazil and Argentina. Latin America plays an important role in global agricultural trade, with Brazil and Argentina among the top three exporters of corn and soybean.

Asia Pacific agriculture sector consists of basic agricultural systems in countries like India as well as the highest technical standards found in Japan. Common characteristics across the region are the predominance of smallholders and the importance of rice, with Australasia being the only exception. Around 90% of the global rice area is concentrated in Asia, with India and China accounting for a share of 28.0% & 20.0%, respectively. Asia Pacific is also the biggest global producer of cotton.

The global market is highly consolidated in nature with over 50% share occupied by the top four companies. The major players include Syngenta International AG, DuPont Pioneer, Vilmorin & Cie SA, and Monsanto Company. Collaborations and agreements are the prominent strategies undertaken by the industry players to sustain the competition and to improve the business performance. For instance, the Monsanto Company entered into a collaboration with Pairwise Plants to take advance steps in agricultural research and development by leveraging gene-editing technology.

This report forecasts revenue and volume growth at global and regional levels and provides an analysis of the latest industry trends in each of the sub-segments from 2014 to 2025. For the purpose of this study, Grand View Research has segmented the global commercial seeds market report on the basis of product, GM seed, and region: