The global companion animal diagnostics market size was valued at USD 2.1 billion in 2018 and is expected to grow at a compound annual growth rate (CAGR) of 8.4% from 2019 to 2026. Increasing the prevalence of chronic diseases demanding effective diagnostics in pet animals is projected to fuel the growth. According to the Banfield Pet Hospital’s State of Pet Health Report, canine diabetes had increased by 40% and feline diabetes had increased by 20% from 2011 to 2017. Moreover, a rising number of pet owners indicating increased adoption of companion animals is anticipated to drive the overall revenue growth. According to a report by the Humane Society of the United States, in 2017, around 60.2 million U.S. households had at least one dog and around 47.1 million had at least one cat. 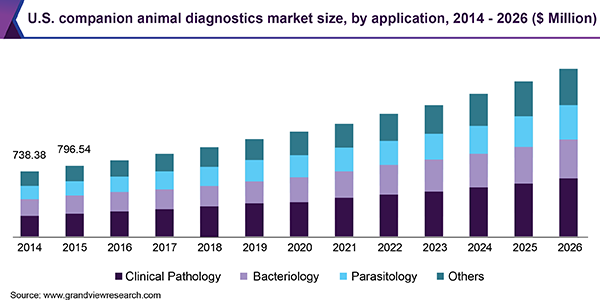 Increasing demand for fully automated and semi-automated diagnostic tests is anticipated to further propel the demand for companion animal diagnostics. Automation in the tests will result inefficient handling of large volume of samples and increased productivity. The tests are cost-effective and also cover a wide range of diseases. Moreover, increased use of glucose monitoring devices to diagnose diabetes at an early stage is projected to further propel the growth. The advent of micro fluids and miniaturization among others supported commercialization and development of in vitro diagnostic devices and imaging systems, which is projected to further propel the growth of companion animal diagnostics.

Increasing demand for Point of Care Diagnostics (POCD) is expected to further propel the growth of the companion animal diagnostics market. POCD provides fast results of the clinical tests and can be assessed directly which saves time. Market players are investing in R&D to develop POCD equipment to gain more revenue share. For instance, in February 2018, Idexx developed Symmetrical Dimethylarginine (SDMA) test kits with artificial intelligence for kidney function in cats and dogs. Zoetis also has a pipeline of products in point of care diagnostics expected to be launched in the forthcoming years.

Government organizations are issuing various guidelines to promote veterinary services globally, which is expected to contribute to market growth during the forecast period. For instance, the OIE International Standards, a part of the WTO framework, issued standards in May, 2018 to improve overall animal health by improving overall veterinary services and controlling animal diseases.

Moreover, rising concern of people for their pets is expected to lead to a rise in pet insurance claims. For instance, in 2017, around 57,000 pet insurance claims were reported for chronic diseases such as arthritis in pets in U.S. Furthermore, advancements in pet insurance, such as Vet Direct Pay by Trupanion to the vet hospitals immediately, are revolutionizing medical insurance for cats and dogs by removing the after treatment claims and eliminating the reimbursement model. The North American Pet Health Insurance Association (NAPHIA) members collectively represent almost 20 different pet insurance brands marketed across the U.S. which is further anticipated to boost the growth of companion animal diagnostics.

Dogs accounted for the largest market share in 2018, attributed to increasing incidence of obesity, diabetes, cancer and other major diseases among dogs. According to Association for Pet Obesity Prevention (APOP) report, 56% of dogs were recorded as obese in U.S. in 2017. Obesity increases the risk of joint problems, cancer, diabetes mellitus, and other chronic conditions. Increasing animal healthcare spending, specifically in the developed regions is further propelling the growth. Increasing awareness among pet owners has resulted in regular diagnosis of glucose levels, thus increasing the demand for glucose monitors.

The equine segment is anticipated to grow at a steady CAGR throughout the forecast period, attributed to the declining preference for horses as companion animals owing to the need for higher maintenance and expenditure. Many advanced diagnostic tests are available for diseases such as West Nile Virus (WNV), influenza, and anemia. Availability of in house analyzers for hematology, immunology, chemistry, and blood gas related tests offered by companies such as IDEXX and Heska for multiple species.

Bacteriology involves advanced diagnostic options for various bacterial diseases and infections. For example, testing an aerobic and anaerobic culture, bacterial pathogens testing in blood or serum sample falls under bateriology. Apart from that, there are tests for mycoplasma, mycobacterium, leptospirosis, staphylococcal infection, actinomycosis, and reproductive testing for pet infertility.

Giardia duodenalis is the most frequent parasitic infection found in pets. The other types include hookworms, ascarids, and whipworms among others. The tests such as centrifugation concentration flotation, ELISA, wet mounds, and nematode culture among others are conducted to identify parasitic infection in animal feces. On the other hand, tests done using serum are, heartworm tests, toxoplasma, and filaria among others. Hence, availability of various advanced diagnosis options for different diseases in companion animals is driving the overall market growth.

The clinical biochemistry segment held the largest market share in 2018, attributed to increased use of clinical tests in companion animals. The introduction of micro methods and increased demand for advanced veterinary care is projected to further fuel the growth. Increasing the incidence of chronic diseases in pets such as diabetes and liver diseases among others is anticipated to further increase the demand for advanced clinical biochemistry. Increasing use of glucose monitoring for point of care treatment due to the increasing concerns of the pet owners is propelling the growth.

The molecular diagnostics segment is expected to exhibit the fastest CAGR over the forecast period. Genetic assays, mass spectrometry, and DNA sequencing are some of the common molecular diagnostic tests. DNA sequencing is used for the identification of changes, structure, and expression of animal DNA. It helps identify factors contributing to the control of certain disease traits and find the most effective treatment.

Immunodiagnostics segment is expected to showcase significant growth over the forecast period. Frequent introduction of new diagnostic tests coupled with increasing spending on healthcare is fueling the growth of this segment. These tests are frequently used for the diagnosis of various diseases, such as taenia solium, echinococcus multilocularis, and wuchereria bancrofti among others. Moreover, favorable pet insurance policies and rising concern among pet owners are projected to propel the growth of the segment. 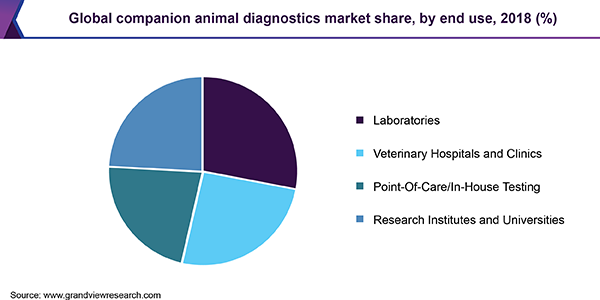 The hospitals and clinics dealing in veterinary health provide a huge range of veterinary diagnostics services such as 4D diagnostic imaging systems and software to the pet owners, ensuring the most effective therapeutics, including advanced diagnostic imaging, novel therapies, nuclear and regenerative medicines, laser diagnosis, and specialized surgeries. The trained specialists with the aid of advanced veterinary diagnostics provide early solutions for different diseases, neurology treatment, and appropriate medicines for pets.

North America accounted for the largest revenue share in 2018, owing to favorable healthcare structure and rising government initiatives. North America has the presence of major animal health and diagnostic companies. The region has seen a rise in veterinary healthcare expenditure which has facilitated the market growth in the region making it the largest revenue shareholder in veterinary diagnostic space across the globe. For instance, according to a report by the American Veterinary Medical Association (AVMA) pet owners from U. S. spent around USD 15.42 billion on veterinary surgeries in 2017.

Rapid developments of advanced bioreactors, reagents and consumables, and other bioprocess equipment are anticipated to fuel the regional growth. Increasing R&D investment in several technologies such as cell line engineering to perform companion animal diagnostics is anticipated to further accelerate the regional market.

Asia Pacific is projected to register the fastest CAGR during the forecasted period, attributed to rapid expansion of manufacturing facilities in emerging economies such as China and India. Rising R&D investment by the key market players for the development of innovative value-added products is anticipated to drive growth of companion animal diagnostics in the region over the forecast period.

For instance, in November 2015, Applikon Biotechnology signed a distribution agreement with India-based Spinco Biotech to export its products to India. The country is recognized as a key destination for animal diagnostics outsourcing and a major supplier of API which is anticipated to promote investment from key market players looking to expand their presence in this region. This factor is projected to bode well for the regional market growth.

The market is consolidated in nature and is characterized by the presence of various small and large companies. Zoetis and Idexx accounted for more than 50% revenue share of the overall market. The other players include Heska Corporation, IDvet, Virbac, and Neogen Corporation. The market players constantly engage in strategic initiatives, such as new product launch, regional expansion, technological advancements, and mergers and acquisitions to gain greater market share. For instance, in July 2018, Zoetis acquired a leading global provider of veterinary point-of-care diagnostics Abaxis to improve its portfolio in companion diagnostics. In January 2019, Idexx launched Catalyst Dx and Catalyst One chemistry analyzers test to improve its canine diagnostics portfolio. Some of the prominent players in the companion animal diagnostics market include:

This report forecasts revenue growth at global, regional, and country levels and provides an analysis of the latest industry trends in each of the sub-segments from 2014 to 2026. For the purpose of this study, Grand View Research has segmented the global companion animal diagnostics market report on the basis of technology, animal type, application, end-use, and region:

How big is the companion animal diagnostics market?

b. The global companion animal diagnostics market size was estimated at USD 2.39 billion in 2019 and is expected to reach USD 2.57 billion in 2020.

What is the companion animal diagnostics market growth?

b. North America dominated the companion animal diagnostics market with a share of 49.86% in 2019. This is attributable to favorable healthcare structure and rising government initiatives.

Who are the key players in companion animal diagnostics market?

b. Some key players operating in the companion animal diagnostics market include Heska Corporation, IDvet, Virbac, and Neogen Corporation, Zoetis and Idexx

What are the factors driving the companion animal diagnostics market?