The global companion animal postoperative pain management therapeutics market size was estimated at USD 228.90 million in 2018 and is expected to witness a CAGR of 6.7% during the forecast period. Rise in pet surgical procedures, especially orthopedic and dental surgeries is propelling the demand for postoperative pain relievers. Increasing prevalence of periodontal diseases is expected to fuel the demand for dental surgeries. According to the AMA report, clinic visits of dogs increased by 6% from 2014 to 2017, due to rise dental problems from 2014 to 2017. Rising companion animal ownership is presumed to further drive the revenue growth.

Increasing disposable income in developing and developed countries is expected to further fueling the market. For instance, according to a report by the American Veterinary Medical Association (AVMA), U.S.-based pet owners spent around USD 15.42 billion on veterinary surgeries in 2017. Around 20 million dogs had undergone surgeries in the same year and among them, around 5 million suffered from postoperative pain. 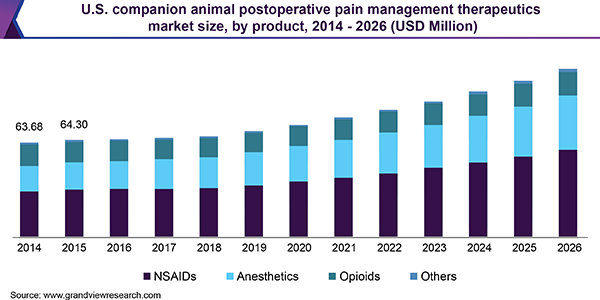 Increased adoption of NSAIDs due restricted use of opioids to control postoperative pain is expected to fuel the market for companion animal postoperative pain management therapeutics. Increasing concerns among pet owners and decreased usage of off-label human pain killers is anticipated to drive the demand for companion pain relieving drugs. The unmet need for long-acting local anesthetics for small animals is encouraging the industry players to develop these drugs. For instance, AniGel SR by In situ Biologics has shown 72 hour efficacy in the pre-clinical study for postoperative pain management. The drug awaits approval of the U.S. Food and Drug Administration (FDA), which is expected to boost the market revenue in the forthcoming years.

According to the Animal Cancer Foundation, in 2017, there were around 65 million dogs and 32 million cats in U.S. Increasing number of veterinary hospitals and pet clinics is fueling the companion animal postoperative pain management therapeutics market. According to the American Veterinary Medical Association (AVMA) report, in U.S., private practice for small animals increased by 14% in 2018.

Stringent regulations pertinent to the use of opioids in humans and animals is hindering its usage as postoperative pain relievers. In 2014, around 40% of U.S. veterinarians used to prescribe opioids for perioperative treatment in animals. In 2017, the U.S. FDA established guidelines regarding safe usage of opioids in pet animals. According to these guidelines, veterinarians should be licensed by Drug Enforcement before prescribing any opioids to animals. According to a survey by AVMA, in 2018, 44% of opioids were being misused or abused by pet owners. Moreover, 11% were intentionally harming their pets for opioids. These factors are expected to limit the growth of opioids and propel the revenue for other postoperative pain relievers in near future.

The NSAIDs segment dominated the market in 2018 with over 45.0% revenue share owing to easy product availability. These drugs are mostly used for controlling inflammation and pain after surgery. The NSAIDs are comparatively cheaper as compared to opioids and anesthetics which is therfore boosting its revenue. Some of the most commonly used NSAIDs for postoperative pain are Rimadyl (Injectable), Metacam, Deramaxx, and Previcox. The market players are trying to develop innovative NSAIDs for peri-operative pain management. In May 2016, Elanco received approval for Onsior for management of postoperative pain related to soft tissue surgery in dogs.

The anesthetics segment is expected to showcase steady growth over the forecast period. Lidocaine and bupivacaine are the commonly used anesthetics. According to a AVMA report, around 5 million dogs suffered from postoperative pain in 2016. The demand for control-release or long-acting local anesthetics products is increasing as pet owners prefer to take their pets back home after surgery. In 2016, Aratana Therapeutics launched Nocita for postoperative pain, capable of controlling pain for up to 72 hours.

Canine accounted for the largest market share in 2018 owing to the increased number of surgeries. Increasing incidence of chronic diseases in dogs is one of the major growth drivers. Dental, hip dysplasia, cataract, wound repair, and neutering are some of the most common surgeries performed on dogs and all of these require postoperative care. Furthermore, increasing adoption of dogs as companion animals among households in developed and developing countries is expected to further propel the growth. 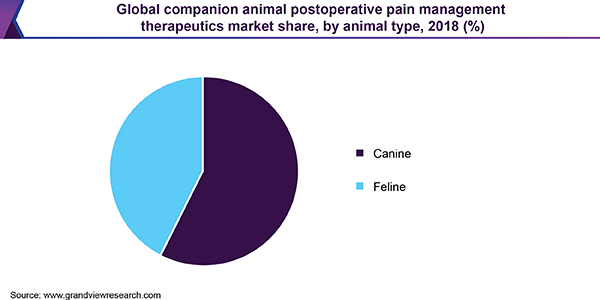 The feline segment is anticipated to expand at a steady CAGR throughout the forecast period. The steady rate can be attributed to increasing concern among cat owners regarding postoperative pain management among their companion animals. Rise in surgeries performed on cats is another major growth driver for the segment. UTI and bladder stones, kidney diseases, dental and eye problems, and ear infections are some of the most common diseases in cats. Increased adoption of cats in European and Asian countries is propelling the growth. For instance, in 2018, the feline population of Europe was 102.69 million whereas the canine population was 84.91 million. Availability of favorable insurance policies is projected further boost the segment growth.

North America accounted for the largest market share in terms of revenue in 2018. Rising government initiatives coupled with favorable healthcare structure in the region is expected to drive the growth. Rising pet ownership coupled with increasing demand for effective animal care is expected to create revenue generation opportunities in the region. Rising incidence of chronic diseases in pets is expected to further boost the demand for companion animal postoperative pain management therapeutics. Increasing number of veterinary surgeries, especially orthopedic and dental, is further propelling market growth. According to the APPA report, Americans spent around USD 18.11 billion on veterinary care in 2018. Moreover, presence of major industry players, such as Zoetis, Elanco, and Merck is boosting this regional growth.

In addition, rising demand for pet insurance is resulting in availability of better treatment options for companion animals. According to a report published by the North American Pet Health Insurance Association (NAPHIA), over 2 million pets were insured in U.S. and Canada in 2017, accounting for an average increase of nearly 17% from the previous year.

Asia Pacific is expected to showcase lucrative CAGR over the forecasted period. Rising prevalence of various chronic diseases has led to an increase in the number of companion animal surgeries. Increasing pet ownership, especially in Japan and China, is projected to further propel the market. As per the National Bureau of Statistics of China, the country ranked third in the world for dog ownership with 27.4 million pet dogs in 2017, after U.S. (55.3 million) and Brazil (35.7 million). The high demand for insurance policies is further fueling the revenue generation in the region. According to the Pet Industry White Paper 2018, in Japan, pet owners spend around USD 740 per pet.

The market is fragmented in nature and is marked by the presence of various small and large companies. Major market players include Zoetis, Bayer AG, Elanco, Ceva, and Norbrook among others. The companies engage in strategic initiatives, such as regional expansions, new product launches, collaborations, and mergers and acquisitions to gain greater market share.

For instance, in April 2019, Elanco acquired Aratana Therapeutics to expand its product portfolio in postoperative pain management for companion animals. In June 2019, Ceva Polchem consolidated its business in Laval, France by establishing its global hub for innovations in companion animal health. This will strengthen the company’s R&D capabilities in the market.

This report forecasts revenue growth at global, regional, and country levels and provides an analysis of the latest industry trends in each of the sub-segments from 2014 to 2026. For the purpose of this study, Grand View Research has segmented the global companion animal postoperative pain management therapeutics market report on the basis of product, animal type, and region: