The global computerized physician/provider order entry (CPOE) market was valued at USD 1.1 billion in 2015 and is expected to grow at a CAGR of 6.2% over the forecast period. The growing incidence of medication errors at the ordering or transcribing stage is one of significant drivers influencing the growth of CPOE market.

As per data enumerated by the U.S. Food and Drug Administration (FDA), increasing instances of manual medication errors can be fatal as it is resulting in at least one death and/or severe injury per day. This instance is cumulatively affecting approximately 1.3 million people annually in the U.S. alone. These errors occur in the distribution system including prescribing, repackaging, dispensing, administering, and monitoring. These mishaps are primarily caused due to poor legibility, communication errors, and patient misuse. Implementation of computerized physician order entry process (CPOE) aids in overcoming aforementioned issues, hence avoiding fatalities caused by medication errors. 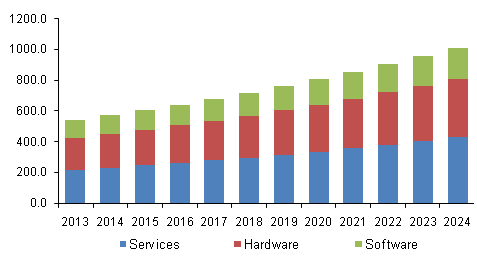 Enhanced government initiatives to develop and deploy technologically advanced healthcare information technologies (IT) globally attributes as a principal driver for the growth in this sector. For instance, during 58th World Health Assembly, the World Health Organization (WHO) urged member states to follow various strategic actions to promote information technology, including CPOE. Long-term action plan for deployment and the endeavor to reach every community with vulnerable groups are some of the key strategic actions prevalent in this industry.

The centralization of medical systems would result in streamlining of processes, rendering several economic benefits. Increasing implementation of lean management principles such as Six Sigma across various routine functionalities resulting in optimal usage of resources is a crucial prevailing trend observed. Hence, increasing popularity of centralization is anticipated to accelerate the demand for these services.

The CPOE systems are of two types: integrated and standalone. Integrated systems held the commanding share in type segment and are anticipated to witness a lucrative growth over the forecast period.

Integrated CPOE systems are connected to every department in a hospital, which has an added benefit of less documentation and reduction in lag time thereby effective management of time and resources. For instance, the software can be connected to pharmacy verification, dispensing, and the nursing documentation, resulting in accurate medication dispensing. In addition it would help in maintenance of an optimal inventory system.

The components of computerized provider order entry (CPOE) application include hardware, software, and services. Services held a substantial share in 2015 and are expected to grow with a sturdy rate during the forecast period from 2016 to 2024. Increasing outsourcing of several IT operations saves cost, time, and offers qualified staff, thereby eliminating the possibility of the need for training and development of the professionals. This factor helped the services segment to dominate the CPOE market.

Furthermore, services segment is followed by hardware components in terms of market share. The high cost associated with infrastructure, such as computer system and high-speed internet, governed their growth.

On the other hand, cloud-based deployment is anticipated to exhibit a lucrative growth rate over the forecast period. Remote access to data and real-time data tracking are the notable advantages associated with cloud-based systems.

The key end users include hospitals, ambulatory centers, physician, and emergency healthcare services. Hospitals held a significant share of more than 30.0% in 2015 and are also projected to witness steady remunerative growth over the forecast period. Large number of patients and greater financing capabilities constitute some of the key reasons for the dominion of this segment. Emergency healthcare services end-use segment accounts for the second largest end use segment owing to the efficient maintenance of the large order volumes and improved order completeness thereby reducing the overall clinical decision time overruling manual errors.
Regional Insights

The regional segments include North America, Europe, Asia Pacific, Latin America, and MEA. North America dominated the global CPOE market with more than 50.0% share in 2015. Higher per capita health expenditure, supportive initiatives to promote healthcare IT, including CPOE, healthcare IT readiness, and availability of skilled professionals influenced the penetration of this utility in this region.

On the other hand, Asia Pacific is anticipated to grow at a lucrative rate of over 6.8% during the forecast period. This is majorly attributed to improving medical infrastructure coupled with increasing acceptance of technological advances in healthcare system. In addition, consistent reforms in investment policies and large target population base represent some of the key factors influencing the growth opportunity for market players to invest in this region.

New product launches, consistent upgradation in old versions, enhanced strategic collaborations between established and new entrants, and mergers & acquisitions are the key initiatives undertaken by the market players to ensure higher sustainability in the market. For instance, in March 2015, Allscripts collaborated with NantHealth to develop point-of-care prescription solutions. This initiative enabled the company enrich its portfolio in CPOE systems.

The scope of the study encompasses types, components, delivery modes, and end - use. Attributes are represented in platforms which would provide insights to new entrants, investors, distributors, and manufacturers.

Estimates and forecasts are based on triangulation of information acquired or analyzed using more than three approaches. The top-down approach is one of the approaches based on the parent and healthcare IT market. More than 100 primary respondents have been contacted and their perspectives have been analyzed using the QFD model.

The regional scope of the report is kept limited to assure the proportion of studies; however, it can be further customized based on specific requirements.