The global concentrated solar power market size was valued at USD 4.5 billion in 2019 and is expected to grow at a compound annual growth rate (CAGR) of 9.7% from 2020 to 2027. The market growth is attributed to growing conservational concerns over carbon emissions and exertions to decrease air pollution. Stringent government strategies to restrain the growing carbon footprint, coupled with monetary benefits presented to enhance the adoption of alternative sources of energy, are projected to boost the market growth. However, concentrated solar power (CSP) technology is money intensive, which may demonstrate to be a limit to its adoption, unless and until reinforced by the government regulatory and institutional authorities. Growing awareness across North America and Europe, coupled with emerging countries of Asia Pacific, is likely to enhance the growth of the market. 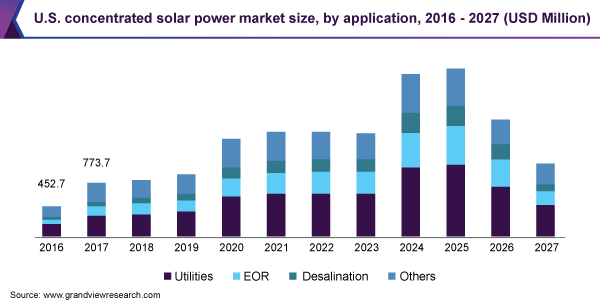 As solar power beats biomass power to become the most predominant renewable power generating source, it has led to investments in countries, such as India, the U.S., China, and Italy, to install and generate electricity by using solar panels. The U.S. market size was valued at USD 910.4 million in 2019 due to the supportive government regulations and initiatives, such as installation cost subsidies and tax credits among other assistance. All the recent concentrated solar power projects built across the U.S. are sponsored through the United States Department of Energy’s (DOE) loan guarantee program.

The global CSP market is expected to grow at a higher rate during the projected period owing to the need to decrease the carbon emission in the troposphere. Solar power is used as an affordable source for power generation and it aids to reduce energy bills as well as carbon dioxide emissions.

CSP is an extremely capital-intensive technology. The components used in the parabolic trough are power blocks, solar fields, heat transfer fluid systems, and thermal energy storage systems. The main components used in solar towers are receiver fields, heliostat fields, thermal energy storage, tower, and power blocks. The Levelized Cost of Energy (LCOE) of CSP plants is subjugated by the preliminary venture cost, which accounts for approximately four-fifths of the total cost. The rest is the cost of operation and maintenance of the plant and its insurance, thus making it a challenge for the CSP market.

The current COVID-19 epidemic has stuck the power sector globally. Owing to the present scenario, various countries observed interruptions in the construction activity due to disruptions caused in the supply chain, primarily by China. Other measures are taken such as lockdown situations in certain countries, social-distancing rules for workforces, and subsequent funding challenges are posing a threat to the market.

Based on the application, the market is segregated as utility, EOR, desalination, and others. The utility application segment accounted for the largest revenue share of 63.9% in 2019. The growth of the segment is determined by important concentrated solar power project developments across the Middle East and Africa and the Asia Pacific, primarily in Saudi Arabia, Morocco, the UAE, and China. Additionally, demand for CSP from the utility areas is motivated by the need to generate renewable power with storage technologies to provide increasing electricity needs across the residential areas.

The utility segment is anticipated to witness significant growth over the forecast period mainly owing to the favorable government initiatives and regulations on increasing the adoption of renewable energy sources. Various financial and economic benefits, including Feed-in Tariffs (FiT) and tax credits, presented by the government authorities will enhance the segment growth till 2027.

The Enhanced Oil Recovery (EOR) application segment is gaining ground at a fast pace and is anticipated to account for over 123.0 MW in terms of capacity by 2027. In this application, steam produced by concentrated solar power farms is driven into oil fields for tertiary recovery. The adoption of such technology in crude oil-producing nations will encourage CSP market growth. In 2019, the other segment was valued at USD 904.6 million and is expected to witness considerable growth over the projected period owing to ongoing R&D in the market.

Based on the technology, the market is segregated as parabolic trough, dish, linear fresnel, and power tower. The parabolic trough technology segment accounted for the largest revenue share of 84.8% in 2019 owing to high penetration of the design, along with easy installation and convention.

The power tower concentrated solar power technology segment was valued at USD 388 million in 2019 and is anticipated to witness a subsequent rise in installed capacity over the projected period, mainly owing to economically assessed products, along with improved designs and many other aids. Power tower technology in the market is witnessing a large-scale adoption, specifically in nations with land availability, as large areas form a criterion for installing power towers. 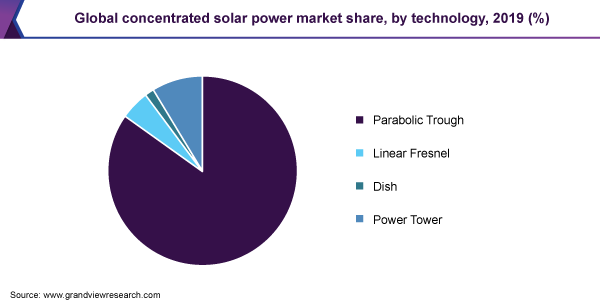 The linear fresnel technology segment is projected to reach USD 652.0 million by 2027. The segment growth is primarily attributed to the usage of cheaper flat glass mirrors and the simple design associated with the technique. Besides, these systems require a lesser amount of concrete support structure and steel, indicating their reduced installation cost and easy assembly process.

Asia Pacific dominated the CSP market in 2019 with a revenue share of 42.8% owing to the upsurge in installations of concentrated solar power plants. China is projected to grow at a significant rate from 2020 to 2027. This is primarily attributed to growing investment in concentrated solar power for alleviating grid locations, which, in turn, is driving the market. Additionally, the need to produce continuous renewable power energy to support rising fiscal activities is boosting the market growth in the region. Europe is likely to expand at a revenue-based CAGR of 16.4% from 2020 to 2027 owing to favorable government policies across numerous nations in the region.

North America emerged as the second-largest regional market in 2019 and it was valued at USD 910.4 million. In MEA, continuing sizable investments in development, along with the changing focus of investors toward green energy alternatives, will favor the market growth, where Morocco is among the top adopters of concentrated solar power in the globe.

The market is slightly concentrated due to numerous large and small market players. The concentrated solar power manufacturers are thoroughly following the developments in the renewable sources of energy businesses to articulate strategies that would support increasing their market share. Various players are making significant investments to develop innovative technology and designs and improve the adoption level of these products. Some of the prominent players in the concentrated solar power market include:

This report forecasts volume and revenue growth at the global, regional, and country levels and provides an analysis of the latest industry trends and opportunities in each of the sub-segments from 2016 to 2027. For the purpose of this study, Grand View Research has segmented the global concentrated solar power market report on the basis of application, technology, and region:

How big is the concentrated solar power market?

What is the concentrated solar power market growth?

b. Asia Pacific dominated the concentrated solar power market with the highest share of 42.8% in 2019. Europe is likely to grow at a significant rate over the estimation period owing to the favorable government policies across numerous nations in the region.

Who are the key players in concentrated solar power market?

What are the factors driving the concentrated solar power market?