The global concrete admixture market size in terms of volume, was estimated at 22,585.0 kilotons in 2016. The industry growth is supported by increasing investment in the infrastructure sector. Government investments in the expansion of airports are likely to propel the demand for concrete admixtures. As of January 2015, global investments made in airport construction was nearly USD 540 billion. The increasing urbanization is putting a strain on the current airports facilities.

The number of international tourists grew by 4.4% to reach 1.18 billion in 2015. Nearly 50 million more tourists visited international destinations compared to 2014. The tremendous performance of this sector is contributing to job creation and economic growth world-wide.

The robust growth of tourism is industry has generated demand for construction of new hotels. The growth in the hospitality sector is directly linked to generate demand for the product.

Post-tensioning is a method to achieve tension in the reinforcement rods after concreting process is completed. Also, the manufacturing process cannot be stopped irrespective of weather conditions. For instance, construction of Mini Sky City was finished in 19 days by using prefab construction in the Hunan Province of China. This skyscraper consists of 19 atriums, 800 apartments, and office space for 4,000 people.

The market in the U.S. is likely to be driven by the growth in healthcare sector of the country. Nearly 1,340 projects are under implementation or are under the planning stage. It is estimated that 50% of these projects have the value of more than USD 50 million. The healthcare sector is financed primarily by the private sector as nearly 73% of the projects are funded by the private sector. Some of the major upcoming projects are Rehabilitation Institute of Chicago and Marin Hospital in California. Both these projects have an estimated value of nearly USD 500 million each. The investment surge in the healthcare sector is likely to present opportunities for admixture products in the coming years.

The water reducing agents is likely to dominate the market over the forecast period. The product share is estimated to increase from 43.9% in 2016 to 44.1% by 2025. The growth in the product demand is largely catered by the rising popularity of the high-rise buildings. The demand for high-rise buildings have certainly grown in recent times. With horizontal land construction coming to halt due to limiting space in the city, developers are widely favoring the construction of vertical high-rise towers to accommodate people. For instance, in India, Mumbai the financial capital of the country is likely to witness 30 tall buildings ranging from 150 meters to 450 metres in the coming years.

The waterproofing agents are projected to reach 14.7% in 2025. The product segment is likely to witness robust demand from the APAC region. The leading construction market of the region includes India, Japan, China, South Korea, and Australia. China is expected to invest nearly USD 720 billion in coming three years. This investment is subjected to infrastructure sector as China witnessing tremendous growth in its urbanization.

The accelerating agents was accounted for 12.2% of the global market. These products are used to increase the concrete strength by altering properties of concrete in cold weather. The calcium chloride is the common type of accelerator generally used as the accelerating medium for concrete. The product demand of likely to generated from the construction industry of Russia. Russia is set to host the FIFA World Cup 2018 which is likely to be the key catalyst in the growth of the country’s construction industry. Due to the cold climatic conditions of the country, the demand for the accelerating agents is likely to be generated over the forecast period.

Air-entraining agents are expected to grow at highest rate over the forecast period. The segment is projected to grow from 10.0% in 2016 to 11.4% by 2025. The product is gaining prominence in the global market due to its distinct feature to provide high degree of workability and durability in the concrete. Other important features include reducing bleeding and segregation of the fresh concrete. The rising demand to provide high compressive strength concrete to build stable structures is likely to be the key catalyst for the segment’s growth.

The primary application of the product is in the construction sector. The product is also used in the construction of tunnels, roads, railway sleepers, stadiums, and others. Increased investment in transport infrastructure development, such as roads and railways in APAC region is expected to lead the growth of the global market. Large-scale development in seaport infrastructure to expand international trade is likely to fuel the demand in the coming years. In the Middle East, new large projects, such as Riyadh's and Qatar's new airports, is expected to stimulate market growth over the forecast period.

The residential was accounted for 32.8% in 2016 of the global market and is expected to reach 34.2% by 2025. The supporting government policies are likely to support the market towards growth. For instance, in India, the implementation of Real Estate Regulatory Authority (RERA) is likely to increase the transparency level in the residential sector of the country.

The non-residential and infrastructure segment is projected to reach 65.8% of the global market by 2025. The increased demand for infrastructure and the easy availability of debt financing has led to strong focus on this sector. The global infrastructure private investment in 2015 witness a steady figure of USD 111.6 billion. Increasing emphasis on infrastructure growth brings good news to the concrete admixture market.

The APAC region is likely to dominate the global market. The region is expected to grow from 50.4% in 2016 to 57.5% by 2025. The region’s growth is largely driven by the construction sector of the countries such as China, India, Japan, Malaysia, and others. Furthermore, governments of the developing countries are reforming their policies in order to attract foreign investment in their infrastructure sector. With the growth in foreign invesment in the infrastructure sector, the market in the region is likely to observe robust demand over the forecast period. 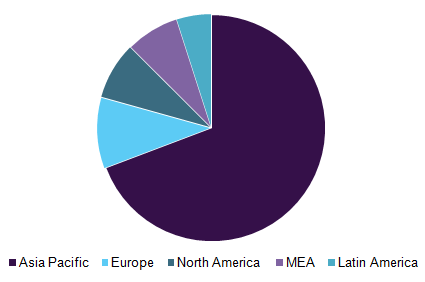 The industry is largely fragmented in local and international markets. Many major players are increasing their geographical presence by merging with the local players to reduce their production cost and improve efficiency. For example, in 2016, Huntsman and Clariant AG entered in a merger to produce construction chemicals. The combined businesses of these two companies were valued at nearly USD 14 billion.

One of the major applications of the product is in the construction industry. With major development taking place in APAC region, vendors should focus on this region as the market has huge potential. These small vendors provide economical products and infiltrating the industry with their cheap rates. The increased consent for infrastructure development is anticipated to come from the countries like India, China, Indonesia.

Key players include BASF SE, CHRYSO SAS, Fosroc, Mapei S.p.A., Pidilite Industries, RPM International, Sika AG, and The Dow Chemical Company. Mergers of major players in the industry is likely to consolidate the market in the predicted timeline. The market dynamics to be controlled by top vendors of the industry which include BASF SE, The Dow Chemical Company, and Sika AG.

This report forecasts revenue and volume growth and provides an analysis of the latest trends in each of the sub-segments from 2014 to 2025. For the purpose of this report, Grand View Research has segmented the global concrete admixture market on the basis type, application, and region: