The global condom market size was valued at USD 9.9 billion in 2021 and is expected to expand at a compound annual growth rate (CAGR) of 8.52% from 2022 to 2030. Rising awareness regarding the use of condoms, the availability of different types of condoms to suit consumer needs, and measures to reduce the spread of HIV and other STIs are likely to boost the market growth during the forecast period. In addition, the free distribution of condoms by government organizations is expected to drive the market. 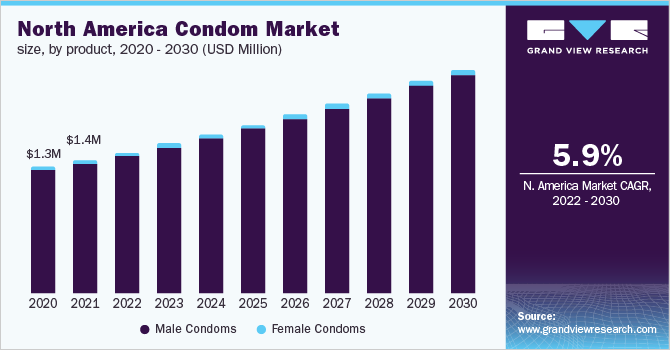 The government in each country is undertaking initiatives to raise awareness and promote the use of contraceptives in the younger generation to control the epidemic of HIV and other STIs and avoid unintended pregnancies. To achieve their UNAIDS 2020 target, which demands that 90% of all the people living with HIV know of their HIV status, 90% of all the people with HIV infection will receive sustained antiretroviral therapy and 90% of all people receiving antiretroviral therapy will have viral suppression.

Participant countries are proactively promoting condom use, along with providing adequate sex education to the youth. Free condom distribution by governments with the aid of UNFPA and other organizations is expected to increase the use of condoms in rural areas.

When used correctly, male condoms are 98% effective in preventing pregnancy and sexually transmitted infections including HIV. According to United Nations Programme on HIV/AIDS (UNAIDS), consistent and correct use of condoms provides effective protection against unplanned pregnancies and STDs. International and government healthcare bodies such as World Health Organization (WHO) and the Center for Disease Control and Prevention (CDC)are playing a significant role in raising awareness regarding safe sex by using condoms. This has effectively increased the use of condoms among sexually active couples in the past decade.

The latex condoms held the largest segment share in terms of revenue in 2021 with a valuation of USD 8.78 billion. Latex and non-latex material type are key type segments analyzed in this study. The launch of new products and rising demand from aging baby boomers are expected to boost the market for latex and non-latex condoms over the forecast period. Latex condoms are 82%-98% effective; hence, the majority of the brands available in the market are made with latex, a form of natural rubber. It is more durable, flexible, and provides effective contraception and protection against STDs.

The male condom segment dominated the market and reached a valuation of USD 9.8 billion in 2021. The condom product market is divided into male and female condoms.  The growth of the male condom segment can be attributed to factors such as manufacturers' focus on the production of male condoms, open-mindedness regarding their use as compared to female condoms, and diverse portfolio. Underdeveloped countries in Africa have high unmet demand for male condoms due to the increasing prevalence of HIV/AIDS. Male condoms are mostly the preferred option among couples, resulting in higher demand.

The female condom segment is estimated to witness the fastest growth of 12.69% compound annual growth rate (CAGR) during the forecast period. Female condoms are being increasingly accepted for reducing the risk of STIs and unplanned pregnancy. In January 2019, a female condom was given a genderless rebranding by the FDA and was assigned a generic name “single-use internal condom.” It was classified as an over-the-counter device.

The World Health Organization (WHO) has set a stringent prequalification procedure for female condoms which has been cleared by very few companies leaving huge scope for companies in this market. Top players like Veru, Inc are targeting the segment as a result of high unmet demand.

Asia Pacific accounted for the largest share of over 51.2% in 2021 and is expected to expand at the fastest growth rate during the forecast period. This can be attributed to an increase in demand in countries, such as China, India, Australia, and Japan, owing to the large population, favorable government initiatives being undertaken to control the population and the increasing prevalence of STDs and HIV.

According to the National Health and Family Planning Commission of China, the country is among the top four countries in terms of condom use and production in the world, preceded by the U.S., the U.K., and Japan.

The market has significant potential in China with expected double-digit growth of 10.38% compound annual growth rate (CAGR). Domestic startups are trying to gain market share. In June 2017, a manufacturer based in Gansu Province launched a condom made from waterborne polyurethane. The company claimed that this product had the thinnest sheath. It was intended to improve the market share of Japanese manufacturers, Sagami and Okamoto. 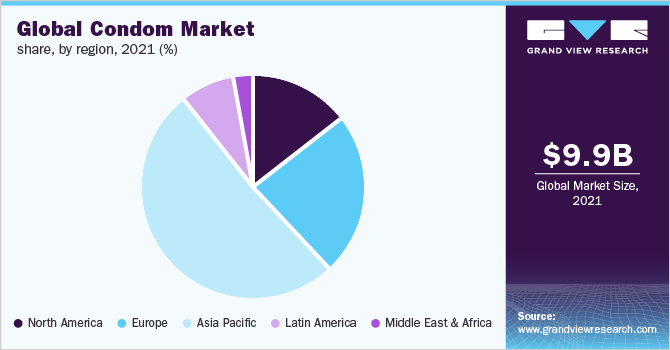 The market in Europe is anticipated to expand at a 7.14% compound annual growth rate (CAGR). Europe held the second-largest share in 2021, followed by North America, owing to the growing demand by sex workers, lesbians, and men who have sex with men (MSM). European countries such as Germany, France, the U.K., and Italy are among the countries with the largest market shares.

Government initiatives promoting the usage of contraceptives among the youth population are being undertaken in these countries to prevent the transmission of HIV. For instance, in November 2018, the France Ministry of Health announced reimbursement of the cost of condom prescription by doctors as an initiative to control HIV and AIDS.

There has been an increase in the demand for condoms in North America, with a gradual vaccination drive and ease in COVID restrictions. However, there is scope for an increase in the adoption of condoms, especially by women who use the product less than men, and awareness regarding sexual awareness can contribute to the cause. An increase in the prevalence of Sexually Transmitted Diseases (STDs) further creates the need for condom adoption.

The drug stores segment dominated the market and accumulated a valuation of USD 4.81 billion in 2021. The growth can be attributed to factors such as the easy availability and access to drug stores. However, the trend is moving towards e-commerce due to closed markets and restrictions on physical movement during the pandemic. E-commerce is expected to exhibit the fastest growth of 9.11% compound annual growth rate (CAGR) during the forecast period. Discrete delivery services and freedom to choose on e-commerce platforms are anticipated to fuel the segment growth.

Digitalization in recent times has resulted in improving access to the internet in developing and underdeveloped countries, resulting in scope for significant growth for e-commerce platforms. Key players such as Church & Dwight and Reckitt Benckiser are focusing mostly on aggressive online marketing strategies to promote their condom brand, thus reflecting the importance and potential of e-commerce.

The market is highly competitive with the presence of well-established global brands, such as Durex and Trojan. However, many local companies in various countries are trying to gain market share with the launch of innovative products, packaging, and promotion to cater to the demand of local customers.

Leading manufacturers are also adopting strategies, such as acquisitions and partnerships, to sustain their position in the market. For instance, in November 2020, Karex Berhad acquired the remaining 30% stake in the U.S. condom firm GP, thus owing 100% of GP.

Private companies such as LifeStyles Healthcare Pte. Ltd. and Cupid Limited have a significant presence globally. LifeStyles Healthcare has strong employee strength & product portfolio. Cupid Limited exports male & female condoms in almost 66 countries around the world, aiming to expand of product portfolio & market presence. In August 2020, Cupid Limited received the U.S. FDA approval to market male condom variants in the U.S., which is in line with its expansion strategy. Some of the prominent players in the global condom market include:

This report forecasts revenue growth at the global, regional, and country levels and provides an analysis of the latest industry trends and opportunities in each of the sub-segments from 2017 to 2030. For this study, Grand View Research has segmented the global condom market report based on material type, product, distribution channel, and region:

How big is the condom market?

What is the condom market growth?

b. In 2021, the latex segment held the largest share of over 89.0% due to the wide availability and low prices in the condom market.

Who are the key players in the condom market?

What are the factors driving the condom market?

b. Key factors that are driving the condom market growth include rising awareness among adolescents about Sexually Transmitted Diseases (STDs) and HIV, easy availability, and increased access to drug stores.