The consumer drone market size was valued at USD 355.9 million in 2015. The evolvement of new innovative technologies, such as collision avoidance and geo-fencing that make flying drones safer have led to increased adoption of consumer drones across the global industry. 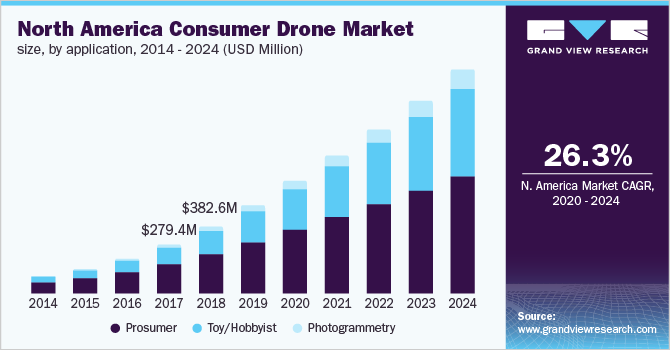 The growth in global demand for drones and increasing adoption of consumer drones have led to the creation of new government regulations, in order to balance innovation and safety. The Federal Aviation Administration (FAA) is expected to release new regulations in the U.S. that could propel Unmanned Aerial Vehicle (UAV) adoption in the region.

The global population is increasingly accepting the imminent trend of the drone as a far and wide accepted hobby. Casual enthusiasts and early adopters comprise a significant portion of the industry. Novel technology in electronics has also attracted gaming segment enthusiasts to accept drones as their newfound source of entertainment along with organizing various competitions

The industry incorporates significant opportunities for growth over the forecast period. Manufacturers are focusing on the development of innovative technologies, in order to broaden their application base. One such innovation is the transformation of consumer UAVs into flying smartphone-like platforms. These developments in the market are expected to retain consumers' interest longer, expand product lifespan, and increase product value.

However, maintenance and repair complexities, as well as privacy concerns and the threat of accidents associated with drones are expected to challenge the market growth over the next eight years. The technology is still in its novelty phase and is presumed to undergo extensive economic and technological alterations in the near future.

Products analyzed in the report include multi-rotor, nano, and other drones. Multi-rotor drones dominated the market share in 2015 and are expected to retain their dominance over the forecast period. Their growth can be attributed to the increased use of multi-rotor drones in aerial photography and FPV racing application.

The emergence of hybrid drones, operating on non-conventional energy sources is anticipated to elevate the industry demand over the forecast period. Drones operating on solar power find their significance in various applications, including mapping and surveillance. Economies, such as China and the U.S., are making significant investments in the R&D of hypersonic drones owing to their high flight speed.

Prosumer application segment is envisioned to remain the dominating segment over the next eight years and accounted for close to 60% of the overall market share in 2015. In various geographies, drone racing as a recreational hobby is being promoted at a high scale which has led to increased adoption of drones for prosumer applications.

The toy/hobbyist applications segment is expected to witness considerable growth, growing at a CAGR of close to 35% from 2016 to 2024. DIY developer drones, incorporating customized UAV fabrication, are projected to drive the industry growth in select geographies such as North America and Europe. The advent of technology in electronics has attracted gaming segment enthusiasts to accept drones as their newfound source of entertainment.

The North America market was valued at close to USD 140 million in 2015 and is expected to grow considerably over the forecast period. Upcoming favorable initiatives by the Federal Aviation Authority (FAA) and increased governmental spending on such advanced drones are expected to drive the industry growth in the region.

Europe accounted for over 30% of the overall industry share in 2015 and is envisioned to emerge as a predominant region over the forecast period. This growth can be attributed to the proposal of new regulations to provide a safe and fertile environment for such a promising industry and grow by integrating drones into European civil airspace.

Asia Pacific consumer drone market is estimated to witness significant growth over the forecast period and is projected to grow at a CAGR of over 35% over the forecast period. This can be attributed to heavy investment initiatives in China drone companies by investors in the U.S. Moreover, the region has made plans to build a UAV production base in China, to tap into the emerging industry.