The global continuous renal replacement therapy market size was valued at around USD 745.4 million in 2016 and is expected to grow at a CAGR of 7.4% over the forecast period. The increasing prevalence of acute renal failure and congestive heart failure is driving the growth of the market over the forecast period. According to an article published in the New England Journal of Medicine in 2009, acute kidney injury is associated with a mortality rate of 60% and often results in the use of renal replacement therapy. 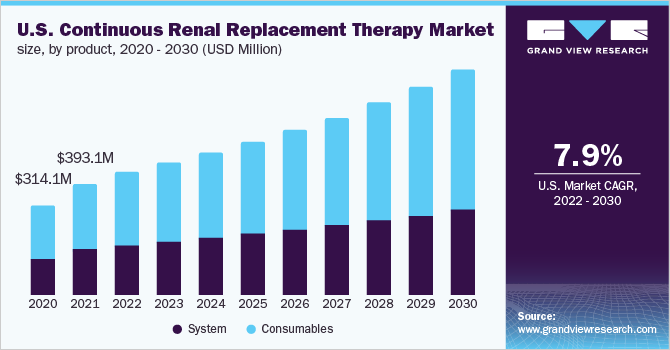 The first continuous renal replacement therapy (CRRT) which was introduced in 1977 was continuous arteriovenous hemofiltration (CAVH). CAVH was an alternative to hemodialysis/peritoneal dialysis especially for patients where serious clinical conditions were not compatible with the traditional forms of renal replacement. CAVH, however, despite its good fluid control, urea clearance could not exceed 15 liters per 24 hours, which resulted in insufficient control of blood urea levels and inadequate blood purification. Hence, other CRRT modalities came into the picture in the later years which includes continuous venovenous hemodialysis (CVVHD) and continuous venovenous hemodiafiltration (CVVHDF).

Sedentary lifestyles are fueling the incidence of renal diseases in various regions. Also, the lack of healthcare infrastructure in under-developed countries is a major threat to the adoption of CRRT for renal disease management. The provision of cost-effective, rapid, and accurate treatment is the core strategy being adopted by the key players in the CRRT market.

A number of technological developments such as high volume hemofiltration and high permeability hemofiltration have taken place since the beginning of continuous renal replacement therapy. Precise machines are being developed to permit the safe and reliable performance of CRRT procedures. Such devices are equipped with a friendly user interface that allows for easy performance and monitoring.

Continuous venovenous hemofiltration (CVVH) segment dominated the market in 2016. The increasing incidence of fluid overload cases which is frequently found in acute kidney injury patients in critical care units would boost the growth of the CVVH sector. Furthermore, according to an article published by the Elsevier, congestive heart failure, which accounts for approximately 5% of all-cause mortality in prevalent dialysis patients, is associated closely with fluid overload, which will consequently increase the application of CVVH treatment procedure. Hence, such factors would contribute to the growth of the segment.

The market for continuous venovenous hemodiafiltration (CVVHDF) is expected to exhibit the highest growth rate during the forecast period. This treatment modality results in complete removal and replacement of solutes and fluids within the blood and combines principles of diffusion and convection, i.e., hemofiltration and hemodialysis using a highly efficient hemodiafilter to remove both solute and fluid, hence boosting the growth of the market.

The market for continuous venovenous hemofiltration (CVVH) is also expected to grow rapidly. Increasing the incidence of fluid overload cases which is frequently found in acute kidney injury patients in critical care units would boost the growth of the CVVH segment. Furthermore, according to an article published by the Elsevier, congestive heart failure, which accounts for approximately 5% of all-cause mortality in prevalent dialysis patients, is associated closely with the fluid overload that will consequently increase the application of CVVH treatment procedure. 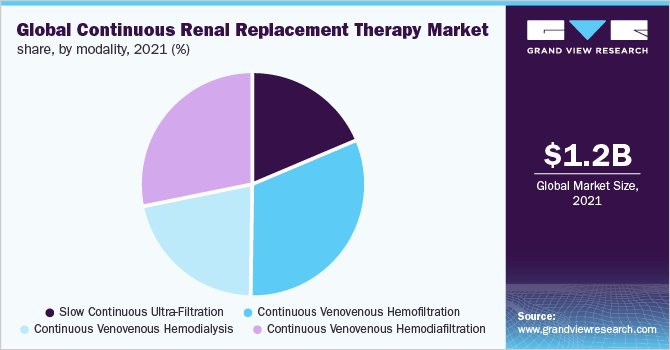 North America dominated the continuous renal replacement therapy sector with the largest revenue share in 2016. Increasing demand for CRRT procedures and advanced innovation in the manufacture of machines and systems are a few high impact rendering drivers for the growth in the region.  In addition, the increasing prevalence of kidney diseases in the U.S. is expected to spur market growth over the forecast period. According to the data published by the CDC, around 29.1 million people in the U.S. had diabetes in 2014. This suggests a large base of the kidney-affected target population for CRRT sector in this region

On the other hand, Asia Pacific is expected to show the fastest growth during the forecast period. Factors such as greater technological advancement and considerable healthcare expenditure would drive market growth. Moreover, the governments of various Asia Pacific countries are actively investing in the improvement of healthcare services in the country to offer better healthcare facilities to its population. Hence, all the aforementioned factors are expected to flourish the regional market growth.

Currently, the global CRRT industry is consolidated in nature with around 8-10 major players operating in the market. Some of the top companies operating in this industry are B. Braun Melsungen AG, Baxter International, Inc., Fresenius Medical Care AG & Co. KGaA, Asahi Kasei Corporation, NIPRO Corporation, Toray Medical Co., Ltd, NxStage Medical, Inc., Medtronic plc, and others. Mergers, acquisitions, and regional expansion are the key strategic undertakings of these companies to increase the market share during the forecast period.

This report forecasts revenue growth at global, regional & country levels as well as provides an analysis of the latest trends and opportunities in each of the subsegments from 2014 to 2025. For the purpose of this study, Grand View Research has segmented the global continuous renal replacement therapy market on the basis of product, modality, and region:

How big is the continuous renal replacement therapy market?

What is the continuous renal replacement therapy market growth?

b. North America dominated the continuous renal replacement therapy market with a share of 35.7% in 2019. This is attributable to the increasing demand for CRRT procedures, and advanced innovation in the manufacture of machines and systems in the region.

Who are the key players in continuous renal replacement therapy market?

What are the factors driving the continuous renal replacement therapy market?

b. Key factors that are driving the market growth include increasing number of patients suffering from renal failure, congestive heart failure, and technical advancements.