The global contrast media injectors market size was estimated at USD 882.1 million in 2016. Technological advancements and increasing demand for minimally invasive surgeries are some of the major factors contributing to market growth. 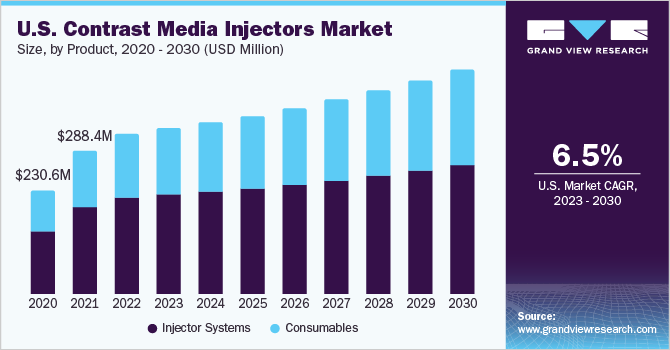 Technological advancements in the field of contrast media injectors, including IT-enabled solutions for syringeless, dual-head, and automated injectors, have brought about incremental changes in medical imaging. Syringeless injectors are more user-friendly, efficient, minimize contrast agent wastage, and provide contrast enhancement during imaging. For instance, in November 2016, Bracco Group launched a new syringeless injector CT Exprès 3D Contrast Media Delivery System in the U.S. This system provides several advantages, such as doing away with the need to fill and clean syringes, user-friendliness, and high efficiency.

An increase in the prevalence of several chronic diseases, such as cancer, as well as cardiac, neurological, and orthopedic diseases, is expected to boost the market. According to the American Cancer Society, around 1,688,780 new cancer cases are estimated to be diagnosed in 2017 in the U.S. Furthermore, according to CDC, 28.4 million adults were diagnosed with heart disease in the U.S. in 2015. Thus, there is a growing demand for advanced products for the diagnosis and treatment of chronic diseases, which is projected to drive growth.

Frequent product recalls are expected to hamper the market growth. Product recalls have adverse effects on manufacturers’ businesses and reputation. They are also likely to affect customer loyalty to the manufacturers’ other products. In addition, recalls also question the efficiency of new products, thereby delaying their adoption by surgeons. For instance, in September 2013, FDA announced Class 2 Device Recall of MEDRAD Stellant CT Injector System with Certegra due to an issue with the software design. Also, in June 2016, Bayer Healthcare initiated the recall of MEDRAD MRXerion MR Injection System. Product recalls such as these negatively impact the mindset of customers, following which the product has to be discontinued.

In 2016, the CT injector systems segment was the largest revenue-generating segment of the market due to the widespread application of these systems in cancer surgery, neurosurgery, cardiovascular surgery, and spinal procedures. In addition, the high adoption of minimally invasive surgeries is expected to boost the market.

Also, the rising prevalence of chronic diseases, including cancer, neurological disorders, and arthritis, is expected to propel the demand for this product segment. According to WHO, cancer is the second largest cause of death, and around 14.0 million new cases of cancer were diagnosed worldwide in 2012.

Manufacturers are focusing on the launch of innovative products to cater to the unmet requirements of radiologists and surgeons. Innovative technologies, such as IT-enabled solutions for duel-head, syringeless, and automated injectors, provide high accuracy, efficacy, and image quality during disease diagnosis and surgery.

In 2016, the single head injectors segment accounted for the largest revenue share of the contrast media injectors market because it is most widely used for angiography, CT, and MRI. In addition, the low price of these products as compared to other systems is expected to drive demand in emerging economies, such as China, India, and Brazil. In addition, the launch of new products is expected to boost this segment. For instance, in February 2016, Guerbet received FDA approval for the OptiOne Single-Head Contrast Delivery System, a CT contrast media injector for injection of radiopaque contrast media during CT scan.

The syringeless injectors segment is expected to grow with the highest CAGR during the forecast period owing to its advantages, such as user-friendliness, high efficiency, and minimum wastage of contrast media. Several leading players are focusing on the development and launching of syringeless injectors, which is projected to drive the growth of the segment.

Availability of well-established healthcare infrastructure and high healthcare expenditure in developed countries, including the U.S., Japan, France, Germany, and the U.K., is expected to boost the market. According to the Centers for Medicare & Medicaid Services, U.S. healthcare expenditure was around USD 3.2 trillion in 2015 and accounted for approximately 17.8% of the gross domestic product. These factors are expected to support market growth.

The radiology segment held the largest share in the market because it is primary for the diagnosis of various diseases, including heart conditions, breast cancer, colon cancer, broken bones, gastrointestinal conditions, and blood clots. In addition, this segment is projected to grow at a lucrative rate owing to a rise in demand for non-invasive medical imaging techniques.

U.S., Japan, Germany, UK, and France are estimated to account for the maximum usage of contrast media injectors. Rise in the burden of several chronic diseases, growing investments by governments to improve healthcare infrastructure, and the availability of expert radiologists in these countries is projected to contribute toward growth.

Technological advancements have also boosted the growth of the segment. For instance, in June 2012, Bayer HealthCare LLC launched a new angiography injector, Mark 7 Arterion Injection System for angiography procedures. Also, the escalating popularity of these products in emerging economies such as China, South Africa, India, Brazil, and Mexico is expected to boost growth.

Hospitals held the highest market share owing to increasing admissions of patients suffering from cancer, neurological disorders, and cardiovascular diseases. According to CDC, in 2014, around 1,150 thousand patient suffering from heart disease including ischemic visited emergency department of hospital in the U.S.

Hospitals are primary users of the contrast media injectors because of its wide range of applications in radiology, interventional radiology, and interventional cardiology. Thus, this segment dominated the market in 2016, owing to the high patient turnaround and frequent readmissions. Furthermore, increasing focus on the development of healthcare infrastructure in developing countries in the Asia Pacific and African regions is expected to propel growth of the segment.

Diagnostic centers segment is expected to witness significant growth during the forecast period owing to increasing cognizance about chronic diseases including cancer, neurological diseases, and neurodegenerative disorders. Growing awareness among people results in increased demand for CT and MRI procedures that are used for diagnosis, treatment planning, and prevention of such chronic disorders.

Asia Pacific region is estimated to show highest CAGR during the forecast period owing to developing healthcare infrastructure in Asian countries including China, India, and Indonesia. Furthermore, the growing prevalence of some chronic diseases, such as cancer, orthopedic diseases, epilepsy, and Alzheimer's disease, is projected drive growth.

However, intense rivalry amongst vendors has led to high pressure on pricing strategies. Moreover, the high cost of systems and adverse effects of contrast agents including iodinated contrast, barium, gadolinium, and microbubble agents, is likely to limit their adoption by healthcare professionals.

This report forecasts revenue growth at global, regional, & country levels and provides an analysis of the industry trends in each of the sub-segments from 2014 to 2025. For the purpose of this study, Grand View Research has segmented the global contrast media injectors market on the basis of product, type, application, end use, and region:

How big is the contrast media injectors market?

What is the contrast media injectors market growth?

b. CT injector systems dominated the contrast media injectors market with a share of 52.7% in 2019. This is attributable to rising widespread application of these systems in cancer surgery, neurosurgery, cardiovascular surgery, and spinal procedures.

Who are the key players in contrast media injectors market?

What are the factors driving the contrast media injectors market?

b. Key factors that are driving the market growth include technological advancements and increasing demand for minimally invasive surgeries.