The global coronary stents market size was estimated at USD 8.8 billion in 2021 and is expected to witness a compound annual growth rate (CAGR) of 3.3% from 2022 to 2030. An aging population and a rising prevalence of risk factors such as cardiovascular diseases (CVDs), complex lesions, diabetes, obesity, and others are expected to drive demand for coronary stents over the forecast period. According to the WHO, in 2019, CVDs were among the major causes of mortality worldwide. In 2019, an estimated 17.9 million people died from CVDs, responsible for 32% of all worldwide mortalities. 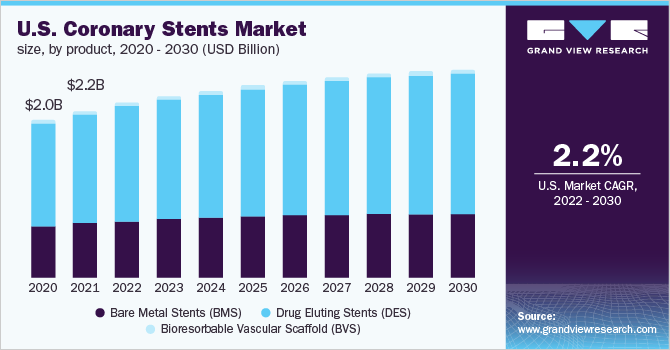 Furthermore, according to research published in the National Library of Medicine in June 2021, one of the CVDs, coronary artery disease (CAD), causes roughly 610,000 fatalities yearly (an estimated 1 in 4 deaths) and is the major cause of mortality in the US.  As a result, the unprecedented rise in CAD incidence is predicted to boost demand for an effective coronary stent device for treatment. This factor is expected to bolster the demand throughout the forecast period. Since a coronary stent is used in the majority of Percutaneous Coronary Intervention (PCI) procedures, the impact of COVID-19 on the market for coronary stents closely tracked the impact of COVID-19 on overall PCI procedures.

During the pandemic's initial outbreak and periods of high local COVID-19 case counts, several states, towns, and nations issued orders to citizens to shelter in place or minimize the potential exposure to and transmission of illness, resulting in elective surgeries being postponed. As a result, total PCI procedure volumes-and hence coronary stent unit sales and revenues-went significantly lower in 2020. These revenues are expected to rise as facility capacity usage improves and resumes all the semi-elective to non-urgent procedures.

In addition, the rising preference for minimally invasive surgeries (MIS) is another factor expected to boost the adoption of coronary stents over the forecast period. The advantages of these procedures include small incision wounds leading to higher patient satisfaction. These procedures also provide shorter hospital stays and facilitate quick recovery. Stenting technology is increasingly being preferred over the conventional balloon angioplasty owing to the introduction of advanced DES and evolving bioresorbable scaffolds. Technological advancements in coronary stents, such as the development of bifurcated stents and the use of biodegradable materials, have led to efficient and improved outcomes of CVD treatment. Companies are proactively involved in product developments and partnerships and strategic collaborations. The aforementioned factors are expected to propel market growth over the forecast period.

The Drug-Eluting Stents (DES) segment dominated the market for coronary stents and held the largest revenue share of over 66.0% in 2021. The continued advancement and launch of the new devices are important factors in strengthening DES's dominance as the preferred device for PCI procedures. The competitors in the market continue to develop and launch technologically advanced DES, such as some of the notable launches are Abbott Laboratories Laboratories' XIENCE Skypoint, Medtronic's Resolute Onyx, and Boston Scientific's Synergy. In comparison to the previous generation devices, these newer-generation DES provide greater stent integrity, higher deliverability, and lower complication rates.

Despite initial disappointments such as overcoming the clinical shortcomings associated with the Absorb BRS representing a technological challenge; and then Boston Scientific's decision to discontinue its Renuvia BRS entire project in 2017, BRS technology has been an interesting technology for physicians as well as market competitors. This is primarily due to the ability of BRS technology to lower the risk of in-stent thrombosis associated with metal stents or most existing old-generation stents. Several BRS devices are available in the European region, including BIOTRONIK's Marmaris, Elixir Medical's DESolve, and REVA Medical's Fantom - all of which have favorable trial results.

Considering growing competition for the BRS and DES device types, the BMS has become less appealing to competitors due to low technological barriers to entry and clinical evidence demonstrating BMS's inferiority to DES. However, the BMS stent type managed to maintain its foothold in the market in 2021, owing to factors such as its low device cost. Bare Metal Stents (BMS) held a substantial share in the market as of 2021. Though the advancement in DES is replacing the usage of BMS, still it is being used in many PCI procedures due to its low cost and low hospitalization rates. Bioresorbable Scaffolds (BRS) are the newest technology introduced in the market after DES. Abbott launched the first bioresorbable vascular scaffold system, Absorb in 2016. However, the company recalled the product globally in 2017 due to some adverse reactions associated with it. Companies are investing to develop newer generation BRS with better patient compliance.

North America dominated the market for coronary stents and accounted for the largest revenue share of over 32.0% in 2021 and is anticipated to witness the same trend over the foreseeable future. A sedentary lifestyle resulting in obesity and other cardiovascular diseases such as heart attack, stroke, Ischemic Heart Diseases (IHD), etc., are primarily driving the coronary stents market in North America. In addition, technological advancements in coronary stent technologies, such as Drug-eluting stents and the use of biodegradable materials, have further augmented the market growth. The presence of mature market players such as Medtronic, Abbott & Boston Scientific is fueling market growth in this region. 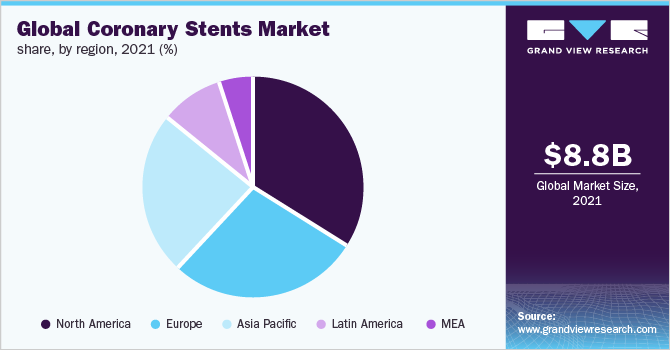 In the Asia Pacific, the market for coronary stents is expected to exhibit the fastest growth rate in terms of revenue generation. This market is driven by some additional variables of enhanced screening for CAD, economic growth, regulatory updates, and notable beneficial reimbursement in some the countries such as Australia and South Korea. Furthermore, increased government investment in healthcare and conducting new initiatives to bring in devices at affordable prices in cost constraint markets such as India and China are influencing this market as well.

For instance, in China, to address inflated pricing and other issues in the delivery of expensive medical supplies, the Chinese government launched a centralized procurement scheme for high-value medical consumables in January 2021. The government aims to use this initiative to skip the associated suppliers and buy the items straight from the manufacturers, lowering the inflated pricing. As a result, the cost of coronary stents has dropped dramatically in China. The average price of coronary stents has been reduced by 93 % since 2019 to grab the national tender.

Abbott Laboratories, Boston Scientific, and Medtronic accounted for a significant presence in the overall market. These companies have gained a notable presence in the market due to good strong performances in the lucrative DES market and large product portfolios spanning numerous different IC device categories as well. Despite the dominance of the three major manufacturers, the market for coronary stents is a blend of numerous global and local players. BIOTRONIK, for instance, has been able to establish a significant presence in the entire market by offering low pricing and new technologies that address unmet needs.

Positive clinical results from BIOTRONIK's BIONYX, BIOFLOW-V, and BIOSOLVE trials, in conjunction with the use of BIOTRONIK's Orsiro DES and Magmaris BRS, have positioned the company well to compete against the market's largest players. BIOTRONIK is also one of the most competitive players in the overall BRS device market. Terumo Corporation, Biosensors International, and Cardinal Health are a few additional significant competitors in this market. Some of the prominent players in the coronary stents market include:

This report forecasts revenue growth at global, regional, and country levels and provides an analysis of the industry trends in each of the sub-segments from 2017 to 2030. For this study, Grand View Research has segmented the global coronary stents market report based on product and region:

How big is the coronary stent market?

What is the coronary stent market growth?

Who are the key companies/players in the coronary stent market?

What are the factors driving the coronary stents market?

b. Key factors that are driving the coronary stents market growth include the rising prevalence of cardiovascular diseases (CVDs), such as stroke and heart attack, along with a growing geriatric population at higher risk of these cardiac diseases.

Which segment accounted for the largest coronary stent market share?

b. North America dominated the coronary stents market with a share of over 32% in 2021. This is attributable to the increasing prevalence of cardiovascular diseases such as heart attack, stroke, and ischemic heart diseases (IHD) and the increased focus of consumers on better treatment options.