Corrosion Inhibitors Market Size, Share & Trends Analysis Report By Product (Organic, Inorganic), By Type (Water Based, Oil Based), By End Use, By Region, And Segment Forecasts, 2020 - 2027 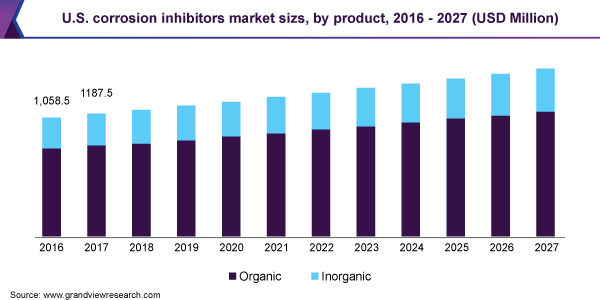 In contrast, inorganic product mechanisms include anodic passivation, cathodic passivation, anion exchange, and saponification. Research has played a significant role in the development of innovative technologies of corrosion mitigation by the application of corrosion inhibitors. The market is highly characterized by numerous product innovations that have resulted from the manufacturer’s contribution to R&D for product performance enhancement.

Besides the increasing corrosion costs, regulations by the U.S. government concerning the toxicity of corrosion inhibitors have impacted the market. Even though several water systems broadly use phosphate-infused products in the country, there are restrictions to their application. Moreover, factors that influence the use of phosphate-infused corrosion inhibitors, including their impacts on wastewater treatment plants and reactions with aluminum, have further added to the limitation.

The organic segment held largest market share of 73.8% in 2019. In recent years, there has been significant development concerning bio-based corrosion inhibitors. These are low in cost, have low toxicity, and are readily available organic compounds, which are obtained from plant extracts such as aromatic herbs, spices, and medicinal plants. Generally, bio-based corrosion inhibitors have aromatic structures with long aliphatic chains and free electron pairs. For instance, Delonix regia and rosemary leaves prevent the deterioration of aluminum metal, while natural honey inhibits corrosion of copper. The factors mentioned above are estimated to drive segment growth over the forecast period.

Coating with inorganic inhibitors is one of the traditional and straightforward ways to increase the passivity of a metal. Some of the most common metals used as inorganic corrosion inhibitors include chromate, nitrate, molybdate, phosphate, and silicate salts of mercury, platinum, palladium, rhodium, rhenium, and iridium. Platinum group metals, including platinum, palladium, rhodium, and iridium, are thermodynamically stable across the pH scale as they are not attacked by non-oxidizing acidic solutions, and do not corrode when exposed to moisture-laden air. These properties of inorganic corrosion inhibitors are estimated to contribute significantly to the product demand in the near future.

The water-based segment held the largest market share of 56.2% in 2019. Water-based corrosion inhibitors are readily soluble in water and are usually sold in solid form. They form a protective layer on the metal surface by altering the physical characteristics of the surface to resist oxidation of the metallic surface, thereby offering rust protection. Moreover, they are cost-effective, form transparent coating after drying, and can be easily applied by using spray, immersion, or brush before subsequent operations.

Oil-based corrosion inhibitors are primarily preferred for long-term protection and severe environmental conditions because of their massive film formation and significant hydrophobic properties. They rely principally on the structure of thick coatings that hinder contact between water and metal surfaces. These are generally the most cost-effective ways to control corrosion as they allow one to use less expensive metals, salts, or organic compounds for a corrosive environment.

The oil and gas segment held the largest market share of 33.1% in 2019. This is attributed to the rising number of internal corrosion problems in pipelines, refineries, and petrochemical plants. The corrosion inhibitors market is gaining popularity in the power generation sector in the developing economies of the Asia Pacific region due to rapid urbanization and industrialization. In power plants, erosion has been one of the significant factors that lead to critical downtime. The steam circuits in nuclear, thermal, and hydropower plants are susceptible to deterioration as the metal components are always in contact with water. To ensure effective power generation, most power plants monitor parameters such as pH value, conductivity, and the presence of corroding anions and cations, which indicate the corrosion rate. Also, they ensure the adequate presence of corrosion inhibitors such as phosphonates, phosphate, and zinc (for steel) and triazoles (for copper). 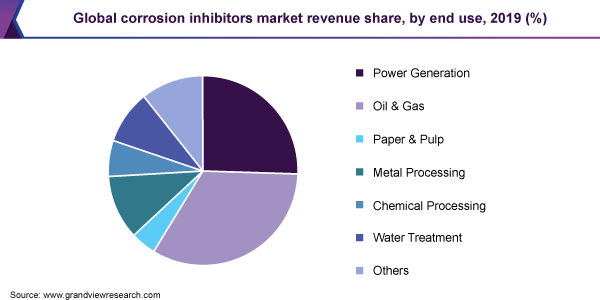 Additionally, processes involved in pulp and paper manufacturing are subjected to extremely corrosive environments. Equipment such as digesters, recovery boilers, bleachers, evaporators, paper making machines, and storage tanks are subsequently exposed to air, water, and organic pollutants. The bleaching process, primarily used to whiten and brighten the pulp for paper manufacturing, produces wastewater containing chlorinated compounds such as dioxins, which significantly deteriorate the materials in contact by increasing the possibility of pitting corrosion in high-cost equipment. Thus, the demand for corrosion inhibitors is high in the pulp and paper industry.

Asia Pacific held the largest market share of 36.3% in 2019 and is projected to be one of the fastest-growing markets in the near future. The growth in the market can be attributed to rapid industrialization in the region, which has triggered the demand from the power generation and several other end-use industries as well. The growing chemical and metalworking sectors in developing economies of the region, including India and China, are also projected to contribute significantly to the market in the near future.

Europe is one of the prominent consumers of corrosion inhibitors owing to the massive consumption of water for industrial sectors such as sugar and ethanol and petrochemical manufacturing. Water treatment issues in Europe hold a vital role in having a direct impact on the corrosion control operations, coupled with maintaining the operational integrity of heat transfer equipment and reducing the adverse effect on the energy efficiency of process units.

The competitive landscape of the market is highly fragmented in nature, with the presence of a large number of key players coupled with high demand from end-users. Key players are concentrating on customized production by using advanced technology and adopting new strategic initiatives such as long-term agreements and mergers to strengthen their base and generate more revenue in the near future. Manufacturers involved in the market are integrated across the value chain. For instance, Arkema is integrated backward by using renewable raw materials for production. On the contrary, The Lubrizol Corporation is forward integrated. The company manufactures fuel additives by using its corrosion inhibitors in the formulation of the product (PowerZol 9548A). Cortec Corporation manufactures several strength-release components and coating products by using their Migratory Corrosion Inhibitors (MCIs). In addition, SUEZ supplies its corrosion inhibitors for several water treatment projects. Some of the prominent players operating in the corrosion inhibitors market include:

This report forecasts revenue growth at global, regional, and country levels and provides an analysis of the latest industry trends in each of the sub-segments from 2016 to 2027. For the purpose of this report, Grand View Research has segmented the global corrosion inhibitors market on the basis of product, type, end use, and region:

How big is the corrosion inhibitors market?

b. The global corrosion inhibitors market size was estimated at USD 7.4 billion in 2019 and is expected to reach USD 7.7 billion in 2020.

What is the corrosion inhibitors market growth?

Which segment accounted for the largest corrosion inhibitors market share?

b. Asia Pacific dominated the corrosion inhibitors market with a share of 36.3% in 2019. This is attributable to growing construction and steel manufacturing activities coupled with increasing product consumption in water treatment sector.

Who are the key players in corrosion inhibitors market?

What are the factors driving the corrosion inhibitors market?

b. Key factors that are driving the market growth include the development of organic corrosion inhibitor products and the growing necessity to increase the shelf life of metal equipment.