The global corrosion protective coatings market size was USD 14.97 billion in 2015. The market is expected to witness growth owing to rising demand from end-use industries including oil & gas, manufacturing, and automotive. Growing use of epoxy-based paints and coatings in production industries for general purpose corrosion protection is expected to drive the industry growth over the forecast period. In addition, additional benefits of epoxy-based coatings such as improved durability and toughness are expected to drive the demand over the next eight years. Furthermore, rising emphasis by the regional government in the matured economies including the U.S. and Europe to reduce the VOC content in the epoxy-based products is likely to fuel the development of bio-based products.

Corrosion protective coatings account for a significant share in the industrial coatings industry on account of several characteristics. These include UV light, abrasion, chemicals and heat resistance, improved toughness, and dimensional stability. In addition, superior weathering resistance to spillage of chemicals and mild industrial atmosphere coupled with superior adhesion of these products to steel structures at elevated temperature is likely to improve the demand. Rising demand for VOC free powder and fusion bonded epoxy products from industries including pipeline construction and oil & gas on account of superior sealing and corrosion prevention is expected to propel the industry over the next eight years. Rising demand for waterborne products on account of low toxicity and flammability and reduced emissions of toxic gases is expected to drive the demand over the forecast period. In addition, rising R&D investment to develop bio-based epoxy resins is likely to fuel growth over the forecast period. 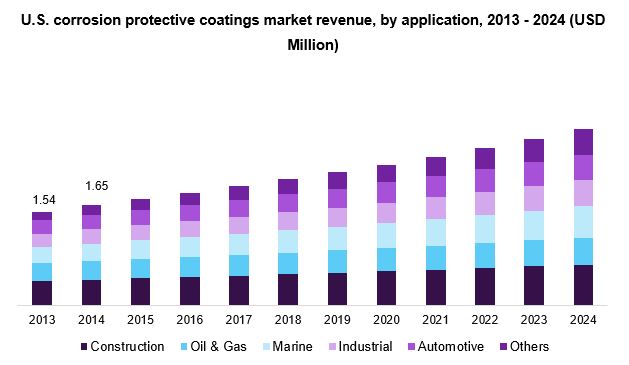 The corrosion protective coating value chain consists of raw material suppliers, manufacturers, distributors, and end-use industries. Corrosion protective is manufactured by mixing various resin materials with hardeners thereby imparting the value in addition to the basic coating. In many cases, the different coatings are combined with various additives to improve and modify the properties of the coatings and impart corrosion protection coupled with additional functions such as lubricant or cleaning fluid.

The Marine segment accounted for over 20% of the overall volume in 2015 and is expected to grow at an estimated CAGR of 7.4% from 2016 to 2024. Rising demand for large capacity commercial ships on account of growing tourism industry globally is expected to fuel demand over the forecast period. Rising use of the product in oil and gas tankers to prevent the cargo tanks from corrosion and scaling arising due to the corrosive nature of refined oil products particularly jet fuel and gasoline are likely to propel the growth in the shipping industry over next eight years.

Rising use of corrosion protective coatings in industries including power, chemicals, and wastewater treatment owing to improved resistance to chemicals, heat and UV light coupled with durability, strength, and flexibility is expected to drive the growth over the next eight years.

Solvent-borne protective coatings accounted for the largest market share valued at USD 4,688.5 million in 2015. Solvent-borne products accounted for a significant share of market demand in industries including automotive, manufacturing, and construction owing to its superior cohesiveness and thin film application. Rising industrialization coupled with growing use of steel in plant structure fabrication is expected to be the key growth drivers for corrosion protective products over the forecast period. However, highly toxic nature owing to the presence of high VOC content and higher flammability is expected to restrain the market over the next eight years. Furthermore, development of environment-friendly waterborne products as a substitute to solvent-borne coatings is expected to pose a challenge to the market growth.

Waterborne coatings are expected to be the fastest-growing segment, growing at an estimated CAGR of over 6% from 2016 to 2024. Waterborne products accounted for over 11.5% market share in 2015. Various advantages over solvent-borne products including lesser toxicity improved air quality and brighter appearance is expected to drive the market demand over the next eight years. Growing application scope in all the end-use industrial applications including general industrial, automotive OEM, metal packaging, and automotive refinish is likely to fuel the market demand. 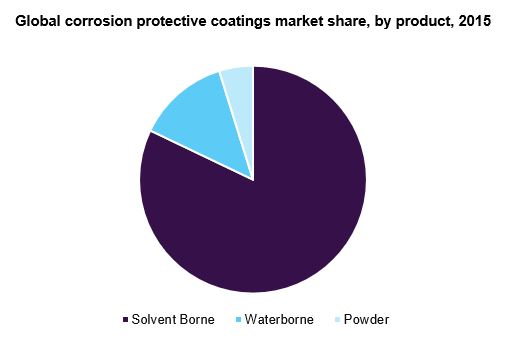 Powder-based products are expected to grow owing to its rising application scope in coating applications in automotive OEM and refinishes.

Asia Pacific emerged as the largest regional market accounting for almost half of the global volume in 2015. Rapid growth in the industries including construction, automotive, shipbuilding, and manufacturing is expected to drive the demand over the next few years. Rising investment by the regional government in emerging economies particularly China and India to improve the energy infrastructure is likely to fuel the demand over the next years. Growth in end-use industries including shipbuilding & repair, petrochemicals in China is has resulted in increased demand for corrosion protective coating. Easier raw material availability coupled with cheaper labor costs is likely to complement the growth of industries in the region which in turn is expected to drive the demand.

Europe is expected to witness a significant share of demand on account of rising investment by the manufacturing companies in capacity expansion and improvement. Rising R&D activities in shipping and automotive industries on improving the metal chemistry and increasing the shelf life are expected to fuel the demand. Stringent government regulations in relation to emission reduction are likely to fuel the investment in R&D activities by the companies in the region.

Key market participants include AkzoNobel N.V., BASF, PPG Industries Inc., The Sherwin-Williams Company, and Jotun. AkzoNobel N.V. is involved in the production of performance coatings and specialty chemicals. BASF is involved in manufacturing chemicals, plastics, performance products, and coatings. The BASF group operates in over 80 countries. In June 2016, BASF signed an agreement to acquire a German company Chemetall that produces metal surface coatings for USD 3.2 billion. This move would help the company grow its profitability in the business.