The global deep brain stimulation devices market size was valued at USD 1.12 billion in 2020 and is expected to expand at a compound annual growth rate (CAGR) of 9.3% from 2021 to 2028. Increasing number of patients suffering from involuntary movements associated with Parkinson’s disease, dystonia, and multiple sclerosis is expected to drive market growth. In addition, increasing demand for minimally invasive techniques due to enhanced patient outcomes is also a high-impact rendering driver for the market for deep brain stimulation (DBS) devices. 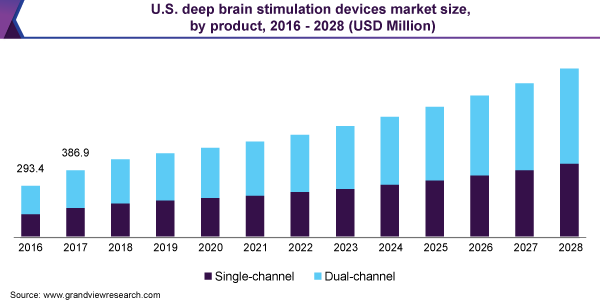 Deep brain stimulation is the surgery for implanting a device that sends a signal to brain areas responsible for body movement. DBS helps in reducing the symptoms of stiffness, slowness, and walking problems caused by various neurological diseases such as dystonia, Parkinson’s disease, or essential tremor. This therapy is generally recommended to patients who do not respond to medicines for at least five years. Moreover, this treatment is approved by the U.S. FDA for patients who cannot have epilepsy surgery, which separates or removes the part of the brain that causes seizures. Thus, the rising prevalence of neurological conditions, such as Alzheimer’s and Parkinson’s disease is the major factor driving the growth of the market.

Countries such as U.S. and Canada have witnessed a high prevalence rate of movement and psychiatric disorders coupled with an increasing geriatric population. For instance, according to Parkinson's Foundation, symptoms of PD are common at an average age of 60. The geriatric population is highly susceptible to these disorders. Similarly, according to Canadian Psychological Association, around 2.0% of the population is suffering from obsessive compulsive disorder. Moreover, an increase in FDA approvals for deep brain stimulation devices in clinical applications, such as tremors, severe obsessive compulsive disorders, and dystonia, is fueling the market. For instance, in March 2020, NeuroPace, Inc. received approval from the U.S. FDA of MRI labeling for its RNS System. These factors are expected to boost the demand for DBS devices in these countries.

Furthermore, severe adverse effects and drug interactions owing to drug absorption by non-targeted sites are anticipated to boost the need for a targeted therapy approach, propelling the demand for DBS devices. These drugs can offer significant improvements in motor function; however, they may lead to adverse effects, particularly when the disease progresses. For instance, constant administration of the drug levodopa may result in long-term complications such as hallucinations, dyskinesia, neurotoxic effects, and severe metabolic changes. Thus, adverse effects such as these drive the clinical need to incorporate alternatives based on targeted therapy approaches, including deep brain stimulators. This, in turn, is boosting the market growth during the forecast period.

However, the single-channel deep brain stimulation device segment is expected to witness the highest CAGR of 9.5% from 2021 to 2028. Healthcare professionals believe that single-channel offers more programming options to neurologists, which led to increased preference for single-channel DBS devices. According to the Parkinson’s Foundation, the geriatric population is more prone to neurological diseases. Thus, the increasing geriatric population, growing awareness about neurological diseases among patients, and preference by healthcare professionals are anticipated to trigger the segment growth.

However, the epilepsy segment is expected to witness the highest CAGR of 16.2% from 2021 to 2028. Growing awareness about advanced treatment options for epilepsy coupled with developing healthcare infrastructure is expected to further fuel segment growth in the coming years. According to the WHO, approximately 50 million people are suffering from epilepsy and it is one of the most common neurological diseases worldwide. deep brain stimulation is used in epilepsy due to the low therapeutic response of medication in seizures and reduced success rates associated with surgeries. This, in turn, will further lead to segment growth.

In the end-use segment, hospitals dominated the market for deep brain stimulation devices and accounted for the largest revenue share of 52.0% in 2020. The growth of this segment can mainly be attributed to the increase in number of DBS surgeries performed in hospitals and the surge in prevalence of Parkinson’s disease, essential tremor. Furthermore, the availability of technologically advanced DBS devices coupled with favorable reimbursement policies is expected to drive the segment during the forecast period. For instance, Medtronic offers comprehensive services to secure and maintain coverage as well as payment for various DBS devices. 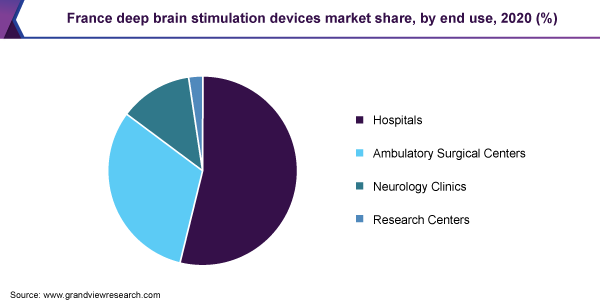 However, Ambulatory Surgical Centers (ASC) segment is expected to grow at the highest CAGR of 9.8% from 2021 to 2028. This is due to the lower cost of procedures as compared to hospitals, convenient access for patient care, reduced waiting time, and low infection rate as compared to neurology clinics and hospitals. Furthermore, according to a study conducted by Advancing Surgical Care, 92% of patients were satisfied with the medical care and service provided in the ASCs, thus, boosting segment growth

However, Asia Pacific is expected to significantly lead the market for deep brain stimulation devices in the future from 2021 to 2028. This is attributed to the rising prevalence of neurodegenerative disorders coupled with unmet demand for effective and long-term solutions. Rising awareness about neurological disease treatment options and improvements in the clinical development framework of emerging economies is expected to drive the market for deep brain stimulation devices in this region. Moreover, the presence of high growth opportunities in developing countries such as Japan, China, and India are likely to contribute to market growth.

The key players are increasingly focusing on product launches, technological advancements, and other growth strategies, such as mergers and acquisitions to strengthen their foothold in the market. For instance, in September 2019, LivaNova together with MicroPort Scientific received the approval of RegaTM pacemakers from the FDA China. These are the smallest pacemakers in the cardiac rhythm management market in China. This approval will strengthen the company’s local presence and expand its footprint in China.

Emerging players such as NeuroPace, Inc., and Aleva Neurotherapeutics SA, are considered innovators in the market for deep brain stimulation devices. Products offered by these competitors have good price-performance propositions, competitive functionality, and are technologically advanced. These players are focusing on product commercialization activities as well as fundraising activities to support the R&D growth. For instance, in October 2017, NeuroPace, Inc. closed a USD 74 million funding round initiated by OrbiMed Advisors and KCK Groups. The funding will support the company’s ongoing efforts for rapid expansion and commercialization of its FDA-approved DBS product- NeuroPace RNS system. Some of the prominent players in the deep brain stimulation devices market include:

This report forecasts revenue growth at global, regional, and country levels and provides an analysis of the latest industry trends in each of the sub-segments from 2016 to 2028. For the purpose of this study, Grand View Research has segmented the global Deep Brain Stimulation (DBS) devices market report on the basis of product, application, end-use, and region:

How big is the deep brain stimulation devices market?

What is the deep brain stimulation devices market growth?

b. North America dominated the DBS devices market with a share of 52.28% in 2019. This is attributable to the rising prevalence of movement and psychiatric disorders coupled with the increasing geriatric population in the region.

Who are the key players in the deep brain stimulation devices market?

b. Some of the key players operating in the DBS devices market include Medtronic, Boston Scientific Corporation, Abbott, and Aleva Neurotherapeutics SA.

What are the factors driving the deep brain stimulation devices market?

b. Key factors that are driving the DBS devices market growth include increasing incidence of neurological diseases, preference for a targeted approach, and technological advancements.