The global deep fryers market size was estimated at USD 502.2 million in 2017 and is projected to register a CAGR of 2.8% during the forecast period. Rising disposable income and living standards coupled with growing domestic and international tourism have resulted in an increased demand for on-the-go fast food, positively impacting product demand. E-commerce retail channel is expected to play a very important role as a significant portion of market revenue is expected to be generated through this channel.

Deep fryers are used for cooking fast food and making food crispier. The appliance consists of various components including a basket that is used to lower and raise the food into the oil for cooking. With various technological advancements being made, an automatic device to raise the food is now featured in various fryers. In addition, a timer, an audible alarm, and various other components have been added to the appliance. These factors have contributed to increased awareness and demand for automatic fryers. 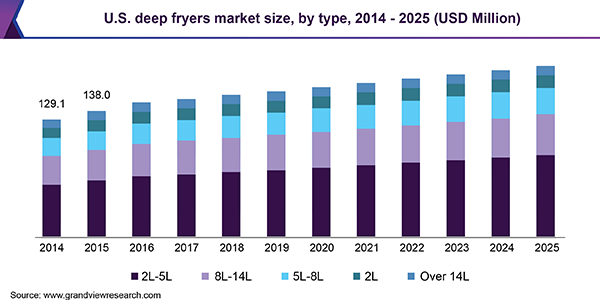 Currently, there is intense competition among market players as they have similar product portfolios and cater to similar consumers. The growing expansion activities being undertaken by fast food companies are expected to positively impact the product demand over the forecast period. In addition, increasing market penetration of electric fryers is anticipated to further drive growth in the near future.

Various manufacturers have started selling their products online on their websites. They have also tied-up with distributors across the globe to ensure maximum product penetration. This helps them expand the product reach as well as their consumer base. In addition, increasing internet penetration in developed, as well as developing countries, is expected to positively impact the market. Furthermore, the influence of food bloggers and professional chefs, who regularly post videos regarding cooking at home that include the use of deep fryers and other appliances is expected to trigger the demand.

Rising preference for fast food across new territories is expected to drive the demand over the forecast period. In many countries, the demand for fast-casual restaurants is increasing. These restaurants have a simple look and feel and, therefore, are popular among the consumers. Furthermore, there has been a significant increase in the meat-eating population across the globe. Fast-food chains provide a variety of options for this demographic. This in turn is expected to influence the product industry positively over the next eight years.

However, air fryers are witnessing an increasing demand as they are a healthier option than deep fryers. Both these products seem similar but vary in terms the quantity of oil used, oil penetration, types of food fried, and maintenance among others. This is expected to be a key challenge for the market over the forecast period.

On the basis of product, the market has been segmented into commercial and household. The others segment includes cosmetics, fragrances, and hygiene products. The commercial variant is used in various establishments including restaurants, hotel kitchens, and food trucks among a few others. These fryers can be of various types, namely electric, gas, and pressure fryers. Changing dynamics of the fast-food market is expected to positively impact the demand for this segment. Over the past few years, there has been diversity in fast food restaurants. The demand for fried food is increasing as restaurants are experimenting and offering their customers with non-conventional food options. Players such as Kentucky Fried Chicken (KFC), McDonald's, Wendy's, Chick-fil-A, and Burger King are operating in the fast-food market.

The distributors segment of the deep fryer market includes the companies or individuals who buy the product from manufacturers and sell it to other retail stores or other entities in the retail value chain. Various companies tie-up with distributors and sell their products, who ensure that products have a widespread reach. These distributors can be located locally as well as internationally. They are responsible for selling products to retail stores, supermarkets, hypermarkets, convenience stores, and various others. 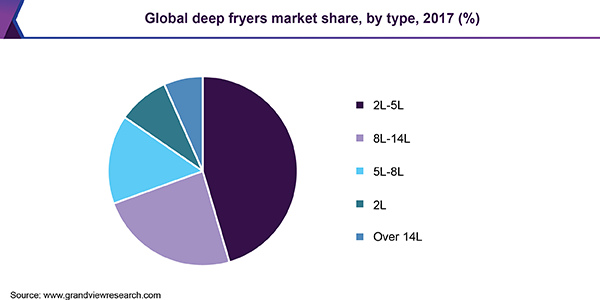 The 8L - 14L type held a significant market share in the U.S. in 2017. The increasing demand for fast food is expected to positively impact demand. Fast-food chains, such as KFC, McDonald’s, and Burger King among others have launched their own websites and apps for consumers to order food online. The ease of ordering at home and the concept of drive-through have positively influenced the demand for fast food and is consequently expected to boost the demand for deep fryers over the forecast period.

North America was the dominant regional segment occupying over 38.8% of the market share in terms of revenue in 2017. The region is projected to continue holding a major share of the market for deep fryers during the forecast period on account of rising preference for convenience food and on-the-go fast food.

The market is characterized by the presence of various well-established players, such as National Presto Industries, De'Longhi S.p.A., and Hamilton Beach Brands Holding Company, in addition to various small and medium players such as Breville, Eware Appliances, and Maxi-Matic among various others. The market witnesses an intense competition as the top appliance manufacturers have a large consumer base. The players are well-established and have strong and vast distribution networks and cater to the demand from the food chain industry.

This report forecasts revenue growth at global, regional, and country level and provides an analysis of the latest industry trends in each of the sub-segments from 2014 to 2025. For the purpose of this study, Grand View Research has segmented the global deep fryers market report on the basis of demography and product: