The global dental x-ray market size was estimated to be USD 1.2 billion in 2015 and is expected to grow at a CAGR of 8.5% during the forecast period. The market has witnessed significant growth in the past decade owing to the increasing prevalence of oral diseases reported worldwide and the growing awareness among the people about maintaining their oral health and obviating preventable periodontal diseases.

The major determinants supporting the growth of this market are the upsurge in periodontitis and dental caries, the prevalent as well as the rising demand for dental radiography in oral disease treatments, sweeping technological advancements in imaging modalities, and other decisive demographic factors. One such factor is the presence of a vulnerable pediatric and geriatric population susceptible to developing dental impairments.

Additionally, the observed boom in the cosmetic dentistry sector is further expected to increase the market share of the dental imaging systems during the forecast period. The Centers for Disease Control and Prevention conducted a study, which reveals that periodontal disease is largely prevalent in the U.S. population. Furthermore, tooth decay or cavities have been reported to be a common cause of oral disease affecting children as well as a majority of adults on a global level; thus establishing the increasing need for oral disease diagnostic procedures employed to carry out preventative, routine oral checkups, which is expected to fuel the market growth. However, on the downside, the high cost of digital radiography systems is expected to hinder the overall growthof this vertical during the study period.

The dental x-ray market by product is classified into digital and analog. Analog radiographs have been studied to be the predominant type in radiography. Though analog systems, comprising a cassette, film, and intensifying screen are dominating this space, a gradual transition to digital systems has been observed in the recent years. The digital radiography segment is anticipated to gain significant momentum, as it is a cleaner technology requiring no films or chemicals and the distinct advantages that these systems offer are promising.

With medical specialists increasingly recognizing the associated benefits including the speed and the simplicity offered by these digital systems with integrated storage and distribution tools that expedite and facilitate the diagnostic process, the medical community is, as a consequence, progressively embracing digital radiography. To this end, the U.S. federal agency of Medicare and Medicaid Services has taken strategic measures to support the switch toward digital radiography systems, wherein a 20% reduction in Medicare reimbursement is to be levied beginning 2017 for medical tests that employ analog x-ray systems. This new reform is believed to affect the analog radiography space largely in the near future.

The type segment is distinguished into intraoral and extraoral x-rays. Intraoral radiographs are sub-classified into bitewing, occlusal, and periapical. The bitewing intraoral radiographs segment is estimated to account for the largest share in the year 2015 owing to its major applications in the therapeutic and diagnostic procedures for oral conditions. 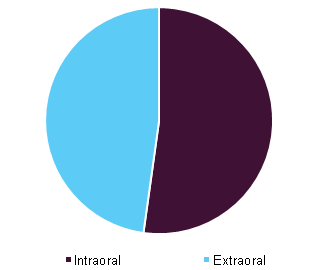 The bitewing radiographs are also majorly used for early detection of oral conditions offering patient comfort and safety to a large extent. The extraoral radiographs are classified into panoramic and Cone Beam Computed Tomography (CBCT). The CBCT segment is anticipatedto witnessthe highest growth during the study period.

The application segment is classified into medical (diagnostic and therapeutic), cosmetic, and forensic fields. The medical use of dental radiography is the highest grossing segment attributable largely to its high applicability in oral, gum, and tooth-related disease diagnostics and treatment.

However, the cosmetics segment is expected to be the fastest growing during the period of 2016 to 2024. The surge in popularity of the field of cosmetic dentistry and the resultant soaring demand for cosmetic proceduresare expected to propel the growth of this particular segment.

The key regions considered in thissectorare North America, Europe, Asia Pacific, Latin America, Middle East, and Africa. The U.S. is estimated to lead the dental radiographyvertical with the highest share. Additionally, the widespread adoption of digital radiographs is expected to further enhance the sector growth in the region.As a result, the U.S. is witnessing a gradual shift toward the incorporation of digital imaging systems. Although experienced dentists continue to adhere to analog x-ray systems, the gradual switch to digital systems has been observed on a wide scale.

In the European market, Germanyis estimated to account for the largest share. On the other hand, Asia Pacific is expected to be the fastest growing segment attributedto the presence of densely populated countries, China and India, and an increase in healthcare spending in the respective nations.

The major players leading the industry are Carestream Health, Inc., Danaher Corporation, LED Medical Diagnostics, Inc., and Planmeca Oy, among others. New product development aimed at increasing the cost efficiency of products and technological innovations are the key strategies adopted by these companies.

For the purpose of this study, Grand View Research has segmented the global dental X-ray market on the basis of product, type, application, and region: