The global diabetic retinopathy market size was valued at USD 5.81 billion in 2016 and is anticipated to grow at a CAGR of 6.3% over the forecast period. Diabetic retinopathy is considered as a serious sight-threatening complication that results due to long term diabetes. It is a disorder, causing progressive damage to the retina and affecting the retinal circulatory system. The treatment line selection for diabetic retinopathy depends on the extremity of the condition and may require intraocular injections, anti-VEGF drugs, laser surgery, or vitrectomy.

Increasing prevalence of diabetes along with growing incidence of blindness due to diabetes is anticipated to propel the market growth over the forecast period. According to the estimates of the WHO, the number of people with diabetes has increased from 108 million adults in 1980 to around 422 million adults in 2014. In addition, the global prevalence of diabetes has also doubled, at nearly 8.5% in the adult population in 2014, as compared to 4.7% in 1980. 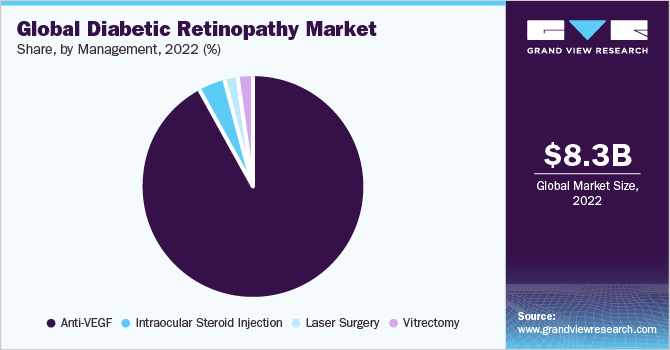 About 78.0% cases of diabetic retinopathy were reported in 2013, as per the statistics given by the Department of Assistive and Rehabilitative Services (DARS), Texas that could eventually lead to loss of vision. As per the Royal National Institute of Blind People (RNIB), diabetic retinopathy was amongst the leading causes of blindness in U.K. in 2017.

It was estimated, that within 20 years of diagnosis, most people with Type 1 diabetes and a majority of people with Type 2 diabetes, suffered from retinopathy to some extent. As per estimates of the screening conducted by the All India Ophthalmological Society in 2014, the prevalence of diabetic retinopathy in the data set they collected was around 21.7%.

Moreover, the rising global geriatric population is expected to heighten the susceptibility towards chronic disorders such as cardiovascular disorders, diabetes, and sleep disorders. The development of proliferative diabetic retinopathy is multi-fold in patients aged above 65 years with a history of diabetes.

According to the Population Reference Bureau report titled "Aging in the United States”, the number of people in the U.S., aged 65 years and over were projected to increase from around 46 million in 2016 to over 98 million by 2060. In addition, the population aged over 65 years was expected to grow from around 15% of the total population to around 24%.

Increasing disposable income and the fear of losing vision have increased the spending by patients to avail the necessary treatment. Availability of advanced technology and minimal pain-inducing laser procedures with quick recovery is expected to promote patients’ willingness to adopt surgical treatments.

Non-proliferative retinopathy typically changes from mild to moderate and then leads to severe conditions. Increased prevalence of diabetes and non-compliant retinal screening in diabetic patients are anticipated to boost the growth of the non-proliferative diabetic retinopathy market. Further, the use of drugs is increasing to cure moderate proliferation with no additional complication has contributed to revenue generation.

On the basis of management, the market is segmented into four categories namely-anti-VEGF treatment, laser surgery, intraocular steroid injection, and vitrectomy. The anti-VEGF segment dominated the market in 2016 owing to high applicability of these drugs in treatment of early diagnosis and mild to moderate cases of non-proliferative DR treatment, better treatment, and faster recovery. The major anti-VEGF agents currently used include Eylea, Avastin, Lucentis, and Macugen.  The increasing usage of Lucentis due to favorable outcomes further propels the growth of the segment worldwide.

North America region accounted for the largest share owing to the supportive reimbursement policies, and increasing prevalence of diabetes. High market penetration of Avastin, Eylea, and Lucentis which are anti-VEGF drugs, is one of the major factors contributing to the large regional share. Moreover, the market is driven by the presence of high healthcare expenditure, rising patient awareness levels, and sophisticated healthcare infrastructure.

Europe commanded the second-largest share in the diabetic retinopathy market in 2016. The expanding healthcare infrastructure along with favorable reimbursement framework in the developed European countries is expected to propel market growth during the forecast period. In addition, presence of high unmet medical needs in the emerging Eastern European markets coupled with rapidly improving healthcare infrastructure in the region is expected to fuel growth.

The emerging nations such as Japan and China in Asia Pacific are anticipated to witness lucrative growth during the forecast period owing to rising disposable income, increasing geriatric population, expanding research funding for diabetes, innovation in diagnostics, and large target patient pool.

China’s market is expected to witness rapid growth over the forecast period. Japan is the largest market in the Asia Pacific region mainly on account of the presence of high healthcare expenditure and rising disposable income. Moreover, growing usage of Lucentis is expected to drive market growth in this region.

Companies are adopting strategic initiatives such as acquisitions, mergers, geographical expansion, and product development in order to advance their businesses and increase their outreach in the market. For instance, ThromboGenics initiated a partnership with Novartis (Alcon) to assist in the marketing and commercialization of JETREA outside the U.S.

Similarly, Alimera initiated the sale of ILUVIEN in Germany and the UK, thereby entering the European market. This initiative was aimed at entering new markets and increasing revenues.

This report forecasts revenue growth and provides an analysis of the latest trends in each of the sub-segments from 2014 to 2025. For the purpose of this study, Grand View Research, Inc. has segmented the global diabetic retinopathy market report on the basis of type, management, and region: