The global disruptive behavior disorder (DBD) treatment market size was valued at USD 15.7 billion in 2017 and is expected to register a CAGR of 4.9% over the forecast period. The market is mainly driven by the growing prevalence of behavioral disorders. Disruptive behavior or externalizing disorders include demonstrating undesirable conduct towards others.

Children and teenagers are the major victims of such disorders and need to be treated at initial stages to avoid further complications. According to the National Institute of Mental Health, in 2016, 44.7 Million youths in the U.S. suffered from severe mental illness due to the lack of treatment at the primary stage. 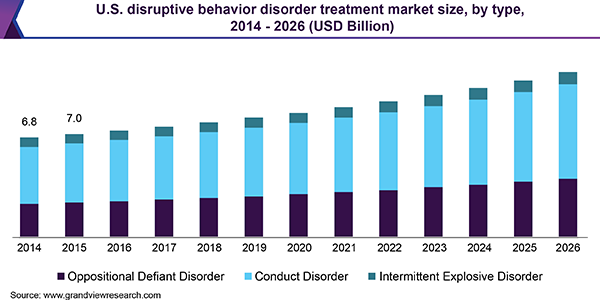 Growing cases of substance abuse among adolescents across the globe are also contributing toward the market growth. As per the Substance Abuse and Mental Health Services Administration (SAMHSA), in 2014, around 8.0 Million American adults suffered from mental health issues due to substance abuse.

Several hospitals, clinics, and institutes are organizing campaigns to create awareness about the relevant treatments among parents and physicians. For instance, the Child Mind Institute, Inc., organized a campaign named Speak Up for Kids, in May 2018, where children’s mental health issues and various treatments and policies related to these disorders were discussed.

Therefore, such initiatives are expected to bolster the market growth over the forecast period. Thus, rising awareness regarding the treatments is also estimated to propel the market development.

Medication management is one of the essential treatments used for treating the oppositional defiant and conduct disorders. In such conditions, various herbal and synthetic drugs are prescribed by specialists for proper brain and nervous stimulation. However, medication is not recommended at primary stage since therapies, such as social-emotional skills training, group sessions, parenting modifications, are more effective. Such factors are expected to drive demand for various therapies in the years to come.

On the other hand, in some complicated cases, or in later stages, such disorder therapies are not much effective; especially when the disorder is not detected at an early stage. Furthermore, in most of the cases, lack of awareness regarding the symptoms of these issues may delay proper treatment, due to which patient has to go for medication management to reduce the effects. This is anticipated to have a positive impact on the growth of the medication management. 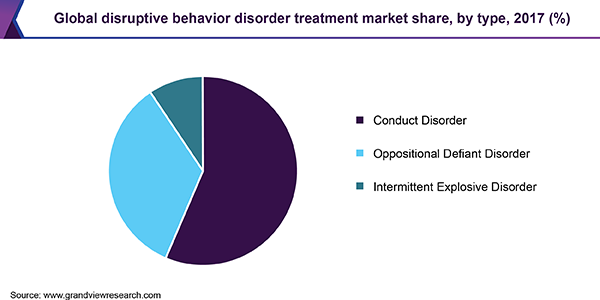 Various therapies and learning sessions are being introduced for parents by various hospitals and clinics to get adequate handling experience of their children. For instance, Boston Children's Hospital, conducts Newborn Behavioral Observations (NBO) system training program for infants and their families on neurobehavioral developments and building parent-child relationship.

North America led the global market followed by Europe. Increasing prevalence of the above-mentioned behavioral issues among children and teenagers in the region is anticipated to drive the market growth. Increasing awareness about the symptoms of such disorders will also surge the demand. For instance, Highland Ridge Hospital of Utah, conducts learning sessions for parents to impart knowledge about early symptoms and behavioral changes associated with behavioral issues to provide proper treatment. Hence, such initiatives are also expected to contribute toward the region’s growth over the coming years. Asia Pacific region is expected to exhibit the fastest growth due to increasing target population and growing substance abuse among adolescents, particularly in India and China.

This report forecasts revenue and volume growth at global, regional, and country levels and provides an analysis of the latest industry trends and opportunities in each of the sub-segments from 2014 to 2026. For the purpose of this study, Grand View Research has segmented the global disruptive behavior disorder treatment market report on the basis of type, treatment, and region: