The global dried fruit market size was valued at USD 8.94 billion in 2019 and is expected to witness significant growth in the forthcoming years. Growing middle class population, along with rising health-conscious consumers, has been boosting the growth of the market over the world. 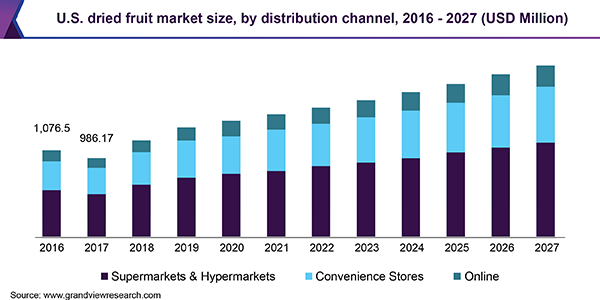 Shifting consumer preference for healthy and nutritious foods owing to rise in obesity and growing aging population are driving the market for dried fruit. Furthermore, increased acceptance for nutritious packaged food and wide application of dried fruit in the dairy, bakery, snack, and confectionery industries have fueled the demand for dried fruit over the years.

Demand for dried fruit has been influenced by the research studies highlighting the role of the product in weight management and disease prevention. Numerous scientific studies have stated that certain types of dehydrated fruits and vegetables can help in lowering the risk of progression of specific cancers. For instance, in August 2019, Dried Fruit Intake and Cancer, a research study, suggested that the consumption of dried fruit may reduce the risk of developing certain types of cancers, including cancers of the prostate, pancreas, stomach, colon, and bladder. As a result, consumers have been including dried fruit in their diets.

Growing trend of on the go snacking is accelerating the growth of the market over the past few years. Characteristics such as less perishability and easy to carry have made dried fruits a popular healthy snack. In addition, dried fruit has gained significant popularity as an ingredient for salads, baked foods, oatmeal, snack, and desert. Over the past few years, raisins have gained significant popularity in the chocolate industry as they add a rich flavor and nutrition in chocolates.

In order to appeal to such consumers, manufacturers such as Sun-Maid Growers of California are adopting point-of-purchase or POP display marketing strategy. Producers have been introducing innovative packaging of dried fruit. Furthermore, they have been including exotic and tropical fruits in their product line to attract more consumers. With the rising brand consciousness among the consumers and strict international trade guidelines regarding packaging, dried fruit manufacturers have been increasingly investing in packaging.

Supermarkets and hypermarkets held the largest share in 2019 and accounted for over 50% share of the total revenue. Over the past few years, supermarkets and hypermarkets have witnessed significant growth in the nuts and dehydrated fruit category. These retail chains are appealing to health-conscious consumers by expanding their organic and natural product lines. In addition, increasing penetration of supermarkets in developing countries will boost the sales of the product through this distribution channel. 7-Eleven, Walmart, Kroger, Aldi, Lidl, Carrefour Sans, and Ahold Delhaize are the leading supermarket chains in the world.

Convenience stores hold a notable share in the market, especially in developing countries. Several countries have specialized retail stores for the product, for instance, shops at the street and public markets and specialty stores. The online distribution channel is anticipated to expand at the fastest CAGR of 7.4% from 2020 to 2027.

Raisins or dehydrated grape dominated the dried fruit market with more than a 35% share of the total revenue in 2019. Turkey, the U.S., Iran, China, and India are the key producers of the product. Similarly, the top consumers of raisins include China, India, U.S., U.K., Germany, and Turkey. Increased production of raisins across the developed and emerging economies has positively influenced the segment growth. In addition, raisins are a source of several nutritional elements, such as fiber, iron, calcium, boron, and phytonutrients, which have been attracting health-conscious consumers. As a result, applications of raisins have grown significantly across various segments of the food and beverage industry due to their health benefits. Companies have been launching numerous products using raisins as an ingredient. 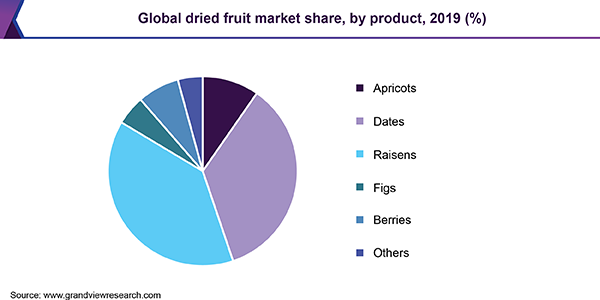 Berries are expected to witness the fastest growth over the forecast period. Over the past few years, consumption of dried berries has been increasing drastically in the U.S., Canada, China, Mexico, Poland, Germany, and the U.K. According to the International Nut and Dried Fruit Council Foundation (INC), the world consumption of dried berries has increased from 129,250 MT in 2013 to 199,476 MT in 2017.

Asia Pacific is expected to expand at the fastest growth over the forecast period. Increasing application of dried fruits in the production of baked foods, confectionaries, and other sweet dishes is fueling the demand for the product in the region. Furthermore, expanded retail market, along with rising purchasing power in the countries, including China and India, is expected to boost the demand for foods with rich nutrients. Enhanced availability, right packaging, and growing awareness about health needs have been driving the market for dried fruit in these countries.

This report forecasts revenue growth at the global, regional, and country levels and provides an analysis on the latest industry trends and opportunities in each of the sub-segments from 2016 to 2027. For the purpose of this study, Grand View Research has segmented the global dried fruit market report based on product, distribution channel, and region: