The global drug delivery across the blood-brain barrier (BBB) market size was estimated at USD 582.0 million in 2018. Growing incidences of neurological disorders, such as Alzheimer’s disease, Parkinson’s disorder, Hunter’s syndrome, and brain tumor are anticipated to drive the market over the forecast period. 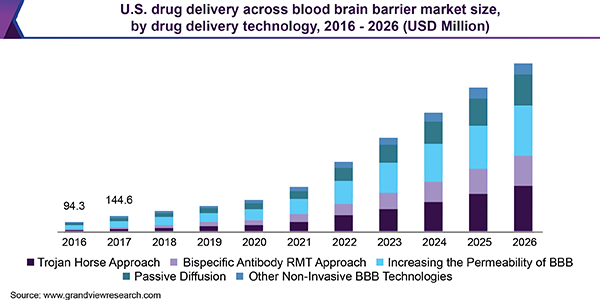 Additionally, the rising prevalence of dementia, majorly affecting the elderly population, is another driver of the market. On a global scale, approximately 50 million people are diagnosed with dementia and this condition is prevalent in 60-70% of patients suffering from Alzheimer’s. Other associated conditions are vascular dementia and other groups of disorders that develop frontotemporal dementia, and dementia with Lewy bodies. The rising prevalence of dementia is hence, anticipated to drive the demand for this market.

Increasing the use of nanotechnology in treating various medical conditions is prevalent in the healthcare domain. Nanotechnology offers several advantages in the treatment of various chronic disorders by target-oriented and site-specific delivery of precise medicines. Moreover, the facilitation of drug delivery and biological therapy for brain cancer across the blood-brain barrier is one of the important applications of nanobiotechnology. Hence, the growing use of nanobiotechnology-based drug delivery for brain tumors is also driving the market.

With few challenges faced by nanoparticles-based drug delivery, ongoing research is expected to present progress in the drug delivery. One of the major advantages of NP-based drug delivery technology is that it overcomes the blood-brain barrier limiting the property of the therapeutic drug module. Also, nanoparticles reduce the speed of drug release in the brain, which decreases the peripheral toxicity.

A growing number of neurological disorders, such as brain cancer, brain tumor, acute and chronic cerebral ischemia, multiple sclerosis, and brain infections, is expanding the demand for advanced drug delivery technology. According to The Lancet Neurology, neurological disorders are the second leading cause of death, worldwide. Growing research and application in the domain is anticipated to fuel the applications of nanoparticles, thereby driving the drug delivery across the blood-brain barrier market.

Based on technology, the market is categorized into the Trojan horse approach, bispecific antibody RMT approach, increasing the permeability of BBB, passive diffusion, and other non-invasive BBB technologies. Increasing permeability of BBB registered a significant share of the drug delivery across the blood-brain barrier market owing to a growing number of research activities for treating various neurological and CNS (Central Nervous System) disorders.

Novel drug delivery technologies are being considered for overcoming the drawbacks & side effects of traditionally used methods, for increasing permeability of blood-brain barrier, to attack specifically on brain tumors while separating the rest of the body from probable injury. Growing efforts in innovation and investigation in drug delivery technologies in chemical, physical, biological, and several nanoparticle systems are anticipated to boost the segment’s growth.

Trojan horse approach segment is also expected to grow considerably over the forecast period owing to the increasing use of biologics for treating CNS disorders and high permeability for the blood-brain barrier. Biologics are considered new therapy for curing most CNS disorders. Biologics are preferred since they deliver specific materials to the brain by allowing them to fight with a protein that helps cross the barrier.

Based on the application, the market is divided into Alzheimer’s, Epilepsy, Parkinson’s, multiple sclerosis, Hunter’s syndrome, brain cancer, and others. Among these, Parkinson’s disorder registered the maximum share of drug delivery across the blood-brain barrier market owing to the high prevalence of the disorder.

The growing prevalence of epilepsy is also expected to lead the segment growth. According to the World Health Organization (WHO), approximately 50 million people are affected by epilepsy. Epilepsy is also one of the most prevalent neurological disorders as compared to others which is why the EU safety standards have mandated to mention possible epileptic incidence triggering devices/electronics. Moreover, the risk of early death in people suffering from epilepsy is 3 times higher as compared to the general population due to the physical overwhelming nature of seizures induced in the form of an attack. 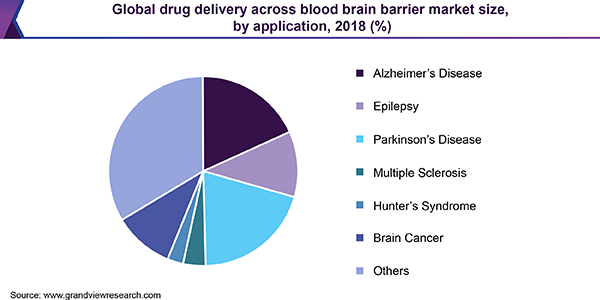 Hunter’s syndrome segment is also expected to grow significantly soon. Introduction of therapies, such as enzyme replacement therapy incorporated with recombinant iduronate-2-sulphatase (idursulfase) in the drug delivery for improving the symptoms of the targeted disorder is expected to boost the segment growth.

The market is segmented as North America, Europe, Asia Pacific, Latin America, and Middle East & Africa. North America registered a significant share of the market owing to a high prevalence of Hunter’s & Alzheimer's syndrome and the adoption of innovative techniques for treating severe life-threatening disorders.

Asia Pacific is also predicted to exhibit the fastest growth in this market over the forecast period owing to the rise in cases of neurological disorders and growing geriatric population that are prone to CNS and brain disorders. Additionally, the growing medical tourism industry and long-term care facilities are also expected to drive the market in the region.

Few players present in the market are Ossianix, Inc., Insightec, Angiochem Inc., Armagen Technologies, Inc., BrainsGate, BiOasis Technologies, Inc., CarThera, F. Hoffman La-Roche, and Iproteos S.L. These players are focused on adopting growth strategies, such as innovations in the therapeutic techniques, R&D for the introduction of modern techniques for curing neurological disorders, campaigns for creating awareness in the untapped regions of developing economies, mergers, and acquisitions with innovative firms, and more.

Ossianix, Inc., one of the leading innovators in the BBB market, lately announced a research association and agreement with Novo Nordisk, a multinational pharmaceutical company. The collaboration aims at providing therapeutic molecules for various severe disorders across the blood-brain barrier to the brain. According to the agreement, Ossianix Company will use its copyright single domain VNAR antibodies for delivering a decided number of therapeutic agents of Novo Nordisk, wherein, Novo Nordisk will be solely responsible for the launch and commercialization of the healing products.

This report forecasts revenue growth at global, regional & country levels and provides an analysis of the industry trends in each of the sub-segments from 2015 to 2026. For this study, Grand View Research has segmented the global drug delivery across the blood-brain barrier market based on drug delivery technology, application, and region:

How big is the drug delivery across blood brain barrier market?

b. The global drug delivery across blood brain barrier market size was estimated at USD 731.5 million in 2019 and is expected to reach USD 881 million in 2020.

What is the drug delivery across blood brain barrier market growth?

b. North America dominated the drug delivery across blood brain barrier market with a share of 49.21% in 2019. This is attributable to the rising prevalence of Hunterâ€™s & Alzheimer's syndrome and the adoption of innovative techniques for treating severe life-threatening disorders.

Who are the key players in drug delivery across blood brain barrier market?

What are the factors driving the drug delivery across blood brain barrier market?

b. Key factors that are driving the market growth include the growing incidences of neurological disorders, such as Alzheimerâ€™s disease, Parkinsonâ€™s disorder, Hunterâ€™s syndrome, and brain tumor.