The global dump trucks market size was estimated at USD 39.97 billion in 2018, exhibiting a CAGR of 8.6% over the forecast period. Increased government funding on substantial infrastructure and technological improvisation of these vehicles are expected to drive the market. According to the World Mining Corporation, global mining production rose from 11.3 billion metric tons in 2000 to 16.9 billion metric tons in 2016. 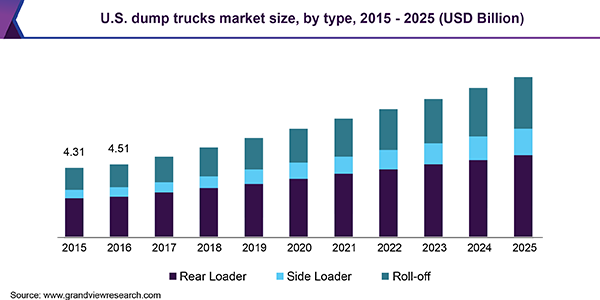 Infrastructure is an essential element of growth. Massive investments in infrastructure development across all continents is expected to increase in the coming decade. The overall spending on infrastructure is however, driven mostly by emerging economies as compared to developed ones owing to enormous support from the Foreign Direct Investment.

Surging mining activities due to increased demand for minerals and natural resources has bolstered the adoption of dump trucks. Manufacturers are introducing energy-efficient vehicles to reduce the adverse effects of mining and excavation. Stringent emission regulations have forced manufacturers to introduce an alternative for diesel engines to reduce their carbon footprint.

Initially, the alternative for combustion engine-based dump trucks was those powered by a mix of electric and diesel/gasoline. However, OEMs have begun manufacturing purely electric dump trucks that comply with emission regulations and meet customer requirements. Some manufacturers have also started developing next-generation dump trucks integrating AI and machine learning for enabling autonomous operation.

Safety challenges associated with mining and construction activities have resulted in development of advanced technologies, which has significantly reduced the involvement of mine workers to minimize hazards. These advanced technologies have recently gained traction and is expected to drive the market. For instance, Caterpillar’s Cat Command feature for hauling allows trucks to respond to calls to the shovel, haul to dump points, and to report for maintenance. The company is also developing an autonomous mining technology to reduce overall mining costs.

Based on type, the global market has been segmented into rear, side, and roll-off variants. The rear type occupied the largest market share in 2018, valuing USD 25.7 billion. It is one of the most commonly used dump trucks in the market owing to its design of articulated chassis and ease of maneuverability. These vehicles have rigid tires that make them suitable for use in hauling of different types of materials, especially at construction sites.

The side segment, on the other hand, is the fastest-growing segment over the forecast period due to its safety features. These vehicle variants have a large load capacity and provide better stability while dumping or unloading. The center of gravity of the box and the load is in the middle of the frame rails, which prevents the trucks from tipping. These vehicles can dump the load either on the right or on left by utilizing hydraulic rams. Increasing demand for these variants can also be attributed to speed of unloading. This segment is expected to witness a CAGR of 11.4% from 2019 to 2025.

Based on engine type, the dump trucks market has been segmented into ICE (internal combustion engine) and electric engine. The ICE segment is expected to account for over 97.0% of the total market by 2025. This is owing to increasing demand and lower cost of dump trucks with combustion engines. However, the ICE engine segment has faced challenges due to its dependence on limited reserves of fossil fuel and need for improvements in emission levels. Strict legal requirements for fuel economy and exhaust emissions, and recent array of advanced technologies have led to adoption of electric engines.

With the advent of electric vehicles, IC engines are now being replaced by electric engines to curb vehicular emissions at mining and construction sites. OEMs are now looking to develop engines with high speed and high power to provide optimum customer satisfaction and minimal environment effects. Moreover, government regulations across the globe to accomplish industrial development goals, energy conservation targets, and climate change have significantly reinforced the growth and development of electric trucks. An electric-drive dump truck uses approximately 10% less fuel than a mechanical-drive one and the use of electric-drive vehicles can also reduce 80% of CO2 emissions.

The market has been studied on the basis of end-use into construction, mining, and others. The construction sector held a revenue share of over 63.0% in 2018 and is expected to dominate the global market throughout the forecast period. Rising infrastructure transformation projects to address the increasing needs of urban and rural population across the globe is further driving the segment. Growing investments in the real-estate sector, coupled with focus on public infrastructure, is predicted to boost product demand during the forecast period.

The construction industry plays a key role for governments across both developed and emerging economies. Well-developed infrastructure is a cornerstone for growth in every economy that determines the growth in GDP, during different stages in the process of moving from developing to developed economic status. Hence, regions such as Southeast Asia, Africa, and Middle East have already made significant investments for continued improvement in infrastructure. 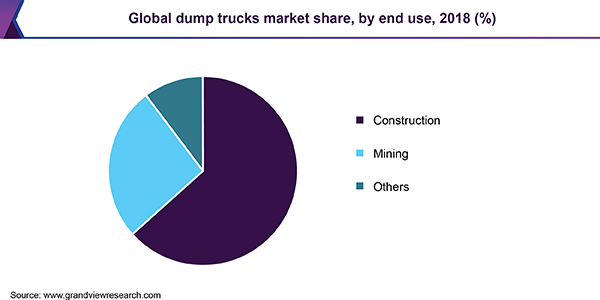 Mining is expected to witness substantial growth over the forecast period owing to infrastructure-driven growth in Asian countries, which has resulted in demand for commodities like coal, iron ore, and copper. Power and cement industries, together with growth in automotive production, is also aiding growth in the mining sector, which ultimately drives the market for dump trucks. Furthermore, increasing need for mineral fertilizers to improve agricultural yield is expected to augment mining activity.

The Asia Pacific market captured over 70.0% of the market in 2018. Economic growth through multitude of investments made by governments in India and China is augmenting regional growth. The Government of India is taking every possible initiative to boost infrastructure development in the country. For example, construction of roads and highways under Prime Minister’s Gram Sadak Yojana, construction of affordable houses for people below poverty line under Pradhan Mantri Awas Yojana, and development of urban transport under the Smart City Mission.

Growing mining activities in countries such as China, India, and Australia is expected to augment regional growth. China is rich in minerals and is also the world’s largest producer of coal. Resurgence of mining activities in the region is expected to propel market growth. Moreover, rising copper mining activities owing to expansion of domestic smelter and refinery has also proliferated demand for dump trucks. Similarly, consumption of coal has significantly increased to cater to the high demand for industrial production and power generation. In addition, gold mining in Australia offers a huge market potential for mining equipment from the U.S., China, Japan, and Germany.

Key players such as AB Volvo, Caterpillar, XCMG, Komatsu Ltd., and Hitachi Construction Machinery Co., Ltd held a considerable share in the market and are among established players in the industry. These players have made significant investments in technological research and development to withstand stiff competition. For instance, Caterpillar has made differentiated product innovations that enable the company to compete more effectively in emerging countries. Also, a larger share of the company’s R&D spending in 2018 was focused on next generation construction equipment that comply with various emission standards.

This report forecasts revenue growth at global, regional, and country levels and provides an analysis of the latest industry trends in each of the sub-segments from 2015 to 2025. For this study, Grand View Research has segmented the global dump trucks market report by type, engine type, end-use, and region:

How big is the dump trucks market?

What is the dump trucks market growth?

Which segment accounted for the largest dump trucks market share?

b. North America dominated the dump trucks market with a share of 70.6% in 2019. This is attributable to growing mining activities in countries such as China, India, and Australia.

Who are the key players in dump trucks market?

What are the factors driving the dump trucks market?

b. Key factors that are driving the market growth include increased government funding on substantial infrastructure and surging mining activities due to increased demand for minerals and natural resources have bolstered the adoption of dump trucks.