The global edible cutlery market size was valued at USD 22.6 million in 2018. Growing awareness regarding the urgency to control the pollution caused by plastics is expected to force cutlery manufacturers to develop eco-friendly products. The majority of non-profit organizations and business affiliates have launched various programs aimed at reducing the consumption of plastic.

Plastic cutlery takes ages to decompose and pollute the soil. The governments of various countries have been providing funds and tax benefits to companies that are striving to reduce carbon footprints. Therefore, edible cutlery acts as biodegradable solutions to combat the recycling issues associated with plastic raw materials. Growing use of these cutleries can be seen in the airlines industry, where steel forms have been considered an unviable option owing to the threat of planes being hijacked by the use of these cutleries as weapon. 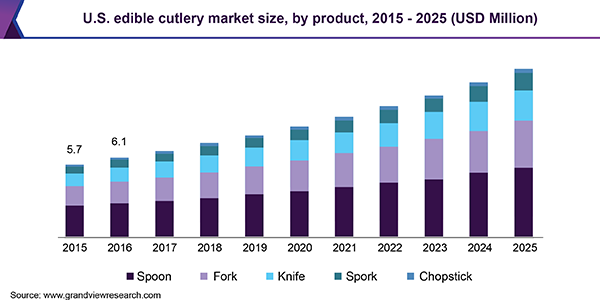 On the other hand, plastic products have been polluting the environment as they are non-biodegradable in nature. Considering all this, edible cutlery act as an appropriate alternatives to plastics and steel. For instance, in May 2019, Etihad Airways introduced the use of edible coffee cups to reduce its plastic uses up to 80% by 2022, leading to a reduction of 17 tons of plastic every month. Similarly, various other airlines have adopted this strategy to enhance their contribution to environmental protection.

Growth of the tourism industry in Asia Pacific countries including China and India is expected to play a key role in increasing the penetration of restaurants and quick service restaurants. As a result, these edible cutleries are expected to find enormous opportunities in the food service sector in the aforementioned countries. Additionally, abundance availability of various grains, including rice, is expected to ensure access to raw material for edible cutlery vendors operating in these countries over the next few years.

Spoon edible cutlery accounted for a share of more than 35.0% in 2018. These products are easier to manufacture than most other types of cutlery owing to their simple structure. Furthermore, the product is recognized across the world and people prefer using it too, unlike the use of a knife or fork, which is yet considered complicated in many parts of the world. These products have gained popularity among countries including India, Bangladesh, Pakistan, Myanmar, Sri Lanka, and Bhutan, where eating with bare hands is a tradition.

Spork edible cutlery is expected to expand at the fastest CAGR of 9.2% from 2019 to 2025. The product is a combination of fork and spoon, which is considered exceptionally useful while traveling. One single item is adequate for the consumption of various kinds of food including soup, salad, and pudding. Furthermore, some of these sporks are flavored with pepper, which complements the soup too and thus, is gaining popularity among food service providers in airlines.

The commercial application segment for edible cutlery accounted for a share of more than 80.0% in 2018. The use of edible cutleries has been gaining popularity in hotels, restaurants, airlines, and railways. Even organizations serving packaged food are slowly transcending and shifting towards offering edible cutleries in order to reduce their carbon footprints, along with creating a brand image of the organization in front of the buyers. Additionally, the majority of providers in order to heighten the service standards make sure to flavor the edible cutlery to compliment the rest of the food.

The household application segment is expected to expand at the fastest CAGR of 9.0% from 2019 to 2025. Increasing the use of edible cutlery in commercial areas has promoted people to enhance these in homes too. Parents of toddlers have taken it as a health substitute for plastic spoons as these edible cutleries are made of healthy cereals, which are beneficial for kids. These products can be eaten like cookies with milk and form a healthy breakfast, thus driving the demand for edible cutlery.

Online channel accounted for more than 75.0% share of the global revenue in 2018. Edible cutlery was initially launched through online channel itself and therefore, it continues to be the most used point of sale. The majority of organizations give a very detailed description of the features of the product, which includes the ingredients of the product, size, and flavor. All these together make the process of buying much easier and thus, the online channels have continued to be people’s preference.

The offline channels are expected to expand at the fastest CAGR of 9.0% from 2019 to 2025. Organizations in order to create an in-depth penetration among consumers are striving to reach them through the convenience stores and supermarkets. Additionally, high concentration of these offline channels including convenience stores and supermarkets in developing economies including China, Bangladesh, and India is expected to open new avenues over the next few years.

Corn-based edible cutlery accounted for more than 40.0% share of the global revenue in 2018. This cereal is considered one of the most grown cereals across the world. In 2018, the U.S. alone produced more than 15 billion bushels. The gigantic production makes the raw material cheaper and thus, reduces the price of finished goods. Furthermore, corn is considered healthy for consumption as it contains high concentration of fiber, which helps in lowering the cholesterol levels and reducing the occurrences of colon cancer. 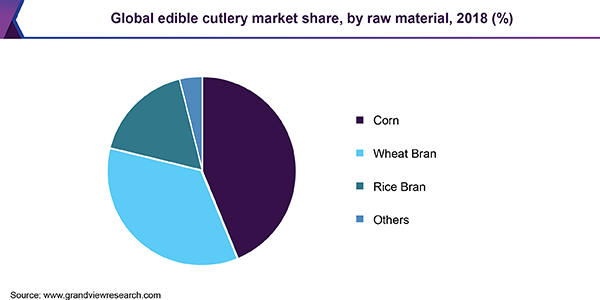 Wheat bran is expected to register the fastest CAGR of 8.7% from 2019 to 2025. Wheat bran-based cutleries have been introduced as viable substitutes for people who do not prefer corn. It is even more preferred by the consumers of South Asia, where wheat is a staple food. Cutleries flavored with honey, sweeteners, and chocolate are common and form a suitable combination for kids, along with milk.

North America was the largest market for edible cutlery, accounting for more than 35.0% share of the global revenue in 2018. Growing working population in countries including the U.S. and Canada who can afford to spend constantly on buying cutlery is driving the market. Furthermore, preference for corn as a staple food has created a fondness for corn-based spoons and forks, thereby driving the demand for edible cutlery.

Asia Pacific is expected to be the fastest growing market for edible cutlery, expanding at a CAGR of 9.6% from 2019 to 2025. Growing population in the developing countries of Asia including India, China, and Pakistan is expected to increase the level of environment degradation. Environmentalists in the region are keen on creating traction for the product to control the pollution caused by plastic. As a result, the edible cutlery manufacturing firms are expected to increase their spending on the establishment of new strategic business units in the region.

Some of the key players are Biotrem, Edibles by Jack, UniCrave Technologies, Mede Cutlery Company, Candy Cutlery, and Unreasonable Group. Majority of the manufacturers are expanding their product portfolio to include edible plates and bowls. It is expected that these products could be really popular with restaurants and eateries. Furthermore, the companies have been experimenting with flavors of the cutlery so that these could complement the food items they are being served with. Additionally, these cutlery have been designed in order to meet the consumers’ demand due to associated health aspects.

This report forecasts revenue growth at the global, regional, and country levels and provides an analysis on the latest industry trends and opportunities in each of the sub-segments from 2015 to 2025. For the purpose of this study, Grand View Research has segmented the global edible cutlery market report on the basis of product, raw material, application, distribution channel, and region: