The global edible insects market size was valued at USD 0.41 billion in 2018 and is anticipated to expand at a CAGR of 19.7% over the forecast period. Increasing health consciousness among the youth, awareness about nutritional benefits, and willingness to explore new options are expected to drive the market in the forecast period. As insects are rich in protein, their demand is increasing among the young consumers who work out and are open to new options. 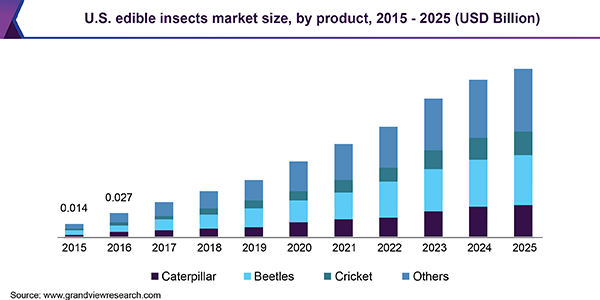 Increasing farming of insects due to minimum investment, along with a decrease in seafood due to restrictions imposed by many countries on fishing, is expected to propel the demand for the product. Demand for these invertebrates is increasing due to their low cost, high nutritional benefits, and requirement of minimal cost for farming, thus impacting the market growth positively.

The governments are taking initiatives to educate consumers in developing countries such as India and China, which will propel the market demand. These invertebrates require low land for production, less feed as compared to other animals, and are 12 times rich in protein than other sources. These prominent factors are expected to boost market demand in the forecast period.

However, in countries such as India, cultural beliefs and negative perception of consumers can hinder market growth. Scarce distribution channels and the absence of a legal blueprint with respect to the consumption of insects are the factors anticipated to restrain the market growth in the forecast period. Moreover, in many countries, insects are considered to be the best food for malnutrition as they are easy to digest. The insects are resistant to disease transfer as compared to the other animals, thereby driving their demand. In addition, the presence of micronutrients such as zinc, fatty acid, iron, and magnesium is expected to fuel the growth of the market.

Beetles are the most consumed invertebrates due to their high nutritional content. A water beetle supplies 20gms of protein per 3.5 ounces, while the June beetle supplies 13gms. The beetles are rich in iron, calcium, and zinc, and thus are highly preferred by both young as well as aging consumers. Crickets are rich in protein, serve more proteins per 100gm in comparison to beef, and are low in cost, which makes them preferable to other sources of proteins.

On the basis of product, the edible insect market is further segmented into caterpillar, beetles, and cricket. Beetles are the most consumed invertebrates and they accounted for more than 30.0% share of the global revenue in 2018. Factors such as different taste as compared to other products and increasing awareness about its nutritional content are driving the segment.

Cricket is anticipated to expand at the fastest CAGR of 20.9% in the forecast period. This growth is attributed to its easy availability, low cost, and high protein content and thus, can be used as an alternative to different protein supplements. Cricket requires low production cost, low emission during the production process, and less water, which acts as a sustainable source. This, in turn, is propelling the demand for the product.

The powder segment accounted for the largest share of more than 40.0% in 2018 and is expected to witness the fastest growth in the forecast period. The vast application and easy availability of the powder form are driving the segment. It can be used as flour and can be consumed in any form. In European countries, they are consumed by mixing it with pizza, cheese, and various other food items to enhance their taste. Cricket flour, which is gluten-free, is used in producing many food products, thus propelling the demand for the segment. 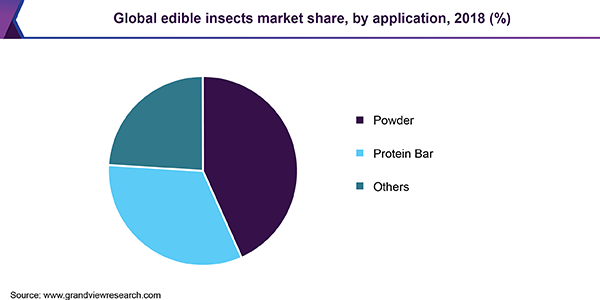 Protein bars accounted for the second-largest share of the total revenue in 2018. Protein bars are generally preferred by athletes and sportspersons owing to their gluten-free nature and thus propelling the demand for the product. Moreover, the protein bars come with immediate consumption or expiry date of 2-3 months, but the powder form of invertebrates can be stored for a longer period of time. Powder forms are easy to store and can be stored at room temperature but the bars need to be kept at a certain temperature.

The Middle East and Africa is the second largest contributor to the market growth and the region accounted for more than 20.0% share in 2018. High consumption in Africa and increasing consumption in countries like UAE are fueling the growth of the market in the region.

Europe is the fastest-growing region, expanding at a CAGR of 20.5% in the forecast period. The usage of invertebrates for curing malnutrition as they are easy to digest is a prominent factor for market growth.

Bugsy Bros, Beetle Jelly, Bugs in Mugs, Haocheng, Crickester, Insecteo, Bug foundation, Eddiebug, Gran Mitla, and Insectables are some of the prominent players in the market. The market presents moderate to low entry barriers due to lack of proper regulations and low production costs. The market is further driven by research and development by the market players. For instance, manufacturing companies such as Bitty Foods and Grilo have been focusing on R&D to serve the consumers with more suitable options, which will positively impact the industry growth over the forecast period.

This report forecasts revenue growth at the global, regional, and country levels and provides an analysis of the latest industry trends in each of the sub-segments from 2015 to 2025. For the purpose of this study, Grand View Research has segmented the global edible insects market report on the basis of product, application, and region:

How big is the edible insects market?

What is the edible insects market growth?

Which segment accounted for the largest edible insects market share?

b. North America dominated the edible insects market with a share of 28.0% in 2019. This is attributable to increasing demand for alternative protein sources and the increasing consumer awareness regarding nutritional benefits of invertebrates.

Who are the key players in edible insects market?

What are the factors driving the edible insects market?

b. Key factors that are driving the market growth include increasing health consciousness of consumers, rising demand for protein products, and willingness to explore new and alternative protein options.