The global edible oil and fats market size was valued at USD 97.32 billion in 2018. Rising importance of vegetable oils as key functional ingredients which reduce the risk of cardiovascular disorders along with lowering the possibility of breast cancer is projected to remain a favorable growth driver. Furthermore, rising popularity of omega-3 fatty acid as a nutritional constituent in the food industry on account of its exceptional anti-inflammatory properties is projected to prompt the adoption of oil produced from soybean, canola, and flax seeds.

Over the past few years, cooking oil manufacturers including Unilever PLC and Cargill, Inc., have been increasing the spending towards the development of products with low cholesterol content. Furthermore, fluctuating diet patterns along with hectic lifestyle among working class professionals is projected to change the consumer preference and drive demand for sunflower and coconut oil for cooking. Coconut oil is a rich source of fatty acid, which provides immunity against bacteria and other pathogens. On the other hand, olive oil is capable of balancing HDL to LDL ratio of cholesterol which ensures proper blood circulation. 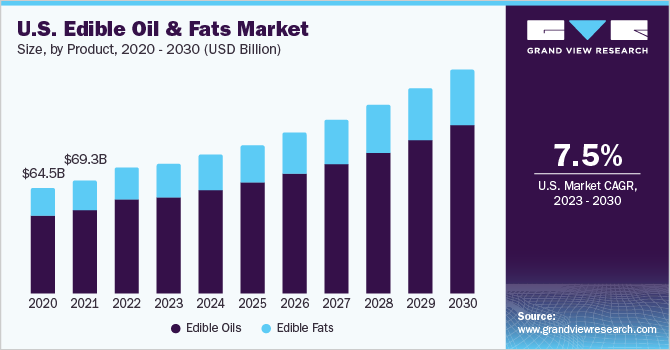 Rising concerns over the adverse effects such as high risk of coronary heart disease, type 2 diabetes, and brain stroke, caused by trans-fat consumption, is expected to promote the usage of vegetable oil as cooking alternatives. In addition, edible oils find application as a good flavoring agent owing to the association of exceptional aroma of peanut or groundnut oil.

Rising number of hotels and restaurant chains from developing countries including China and India on account of supportive government policies aimed at improving city infrastructure is projected to boost the utility of edible oils. In addition, shifting preference of middle-class income groups of countries including Saudi Arabia and UAE to opt for dine-out during weekends is expected to open new market avenues in food service sector over the next eight years.

Edible oils generated a revenue of more than USD 70 billion in 2018. Among oil products, sunflower oil accounted for more than 30% of global market share in the same year. Rising importance of the product as a key source of numerous nutritional constituents including vitamin E, selenium, phytosterols, and magnesium in the food and beverage industry is expected to remain a favorable factor over the next eight years. Furthermore, sunflower oils are gaining traction as immune boosters on account of the presence of zinc content in it.

Soybean oils are projected to foresee fastest CAGR of 8.3% from the period of 2018 to 2025, attributed to increasing penetration of soy as a key source of nutritional ingredients including omega-6, vitamin E, and vitamin K. Furthermore, low saturated fat value and no trans-fat nature of soy is expected to promote its role in nutrition industry.

Edible fats generated a revenue of more than USD 25 billion in 2018. The emergence of veg-derived margarine as a key substitute of butter in developed markets including, Germany and the U.K. is expected to open new markets. Furthermore, growing concerns over lactose intolerance and glutamic disorders in the abovementioned countries is projected to force the consumers to use margarine as a veg-based fat alternative for direct consumption in the near future.

Offline channels generated revenue of exceeding USD 50 billion in 2018. Edible oils are majorly sold from the supermarkets and convenience stores. Walmart, Reliance Mart, SPAR, and Carrefour, are among some of the major retail chains. The market revenue from online channels is expected to witness a CAGR of 8.0% from 2018 to 2025, attributed to the increasing importance of e-commerce portals as the key selling medium among buyers on account of exceptional value-added services including Cash-on-Delivery (COD) and coupon benefits.

Asia Pacific led the market, accounting for more than 30% of global share in 2018. The segment is expected to witness impressive CAGR as a result of population growth, rising disposable income coupled with urbanization in emerging economies such as China, India, and Bangladesh. In addition, rising popularity of low-calorie content oil among middle-income age groups of the abovementioned economies is projected to have a positive impact on the market. 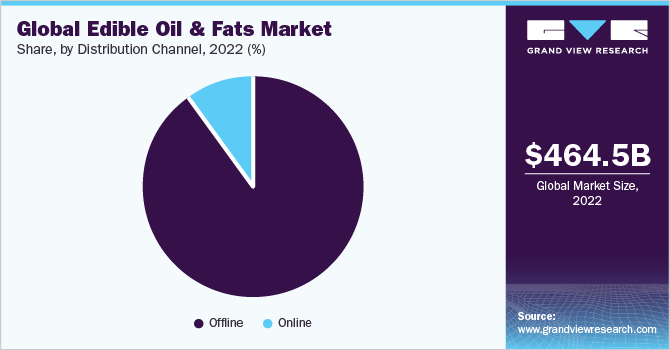 Europe is expected to reach more than USD 25 billion by the end of 2025. The predominant consumption of Mediterranean diet among the consumers from Spain, Italy, and France is projected to upscale the requirements of specialty oils including olive oil.

Leading manufacturers are Wilmar Internationals, Cargill, Archer Daniels Midland Company, and International Foodstuff Company Holdings Limited. Market leaders are expanding their geographical existence to gain concentrated market share. Formation of strategies and collaborating with buyers to build new products is projected to remain a critical success factor. The strong foothold of oilseeds farmers in the developing countries including China, India, and Indonesia is projected to force the edible products manufacturers to establish their strategic business units in vicinity over the next eight years.

This report forecasts revenue growth at global, regional, and country levels and provides an analysis of the latest industry trends in each of the sub-segments from 2014 to 2025. For the purpose of this study, Hexa Research has segmented the global edible oil and fats market report based on product, distribution channel, and region: