The global electrolytic manganese dioxide market size was valued at USD 1.25 billion in 2018 and is expected to expand at a CAGR of 7.0% over the forecast period of 2019 to 2025. High demand for batteries such as zinc-carbon, alkaline, and lithium-ion batteries from various end-use sectors like electrical and automotive, is expected to drive the growth.

Lithiated Manganese Dioxide (LMD) battery is one of the most substantial developments the electrolytic manganese dioxide (EMD) market has experienced. It has a mixture of 61% manganese, 4% lithium, and 35% oxygen by weight, and offers several benefits such as high-power output, thermal stability, and improved safety, which increases its demand among the manufacturers producing electric vehicles. 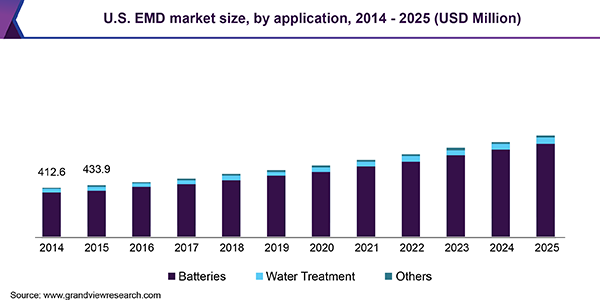 One in every three EVs in the world is in the U.S., wherein the EMD is employed in the batteries of electric cathodes. Growth in the stringent regulations regarding water treatment is expected to drive the demand for water treatment systems in the forthcoming years, and in turn, propel the growth of the electrolytic manganese dioxide market in near future.

Additionally, the alkaline batteries are anticipated to witness growth in this developed economy due to the various benefits such as huge capacity over an extensive range of current drain and good shelf life. The U.S. is currently the largest market for water treatment systems and is expected to witness higher growth in the forthcoming years.

The rise in demand for portable devices is expected to positively influence the growth of the EMD market. Batteries retain the potential to absorb the damage and fluctuations and provide constant power supply to electric and electronic devices. Increasing demand for power backup in emerging economies such as Vietnam, China, and India is likely to accelerate in the forthcoming years.

The upsurge in the acceptance of hybrid and electric vehicles coupled with the incentives offered by the government for the promotion of EV technology is anticipated to propel the growth of battery, as well as, electric car industries. Additionally, volatile prices of gasoline are projected to impact the demand for electric vehicles positively and compel the battery service networks to enhance and surpass the gasoline fueling infrastructure.

On the basis of application, the Electrolytic Manganese Dioxide (EMD) market is bifurcated into battery and water treatment. The battery is further divided into lithium-ion batteries, alkaline batteries, and the zinc-carbon battery. The battery segment emerged as the most dominant application segment with a total share of over 90% in 2018 and is expected to continue leading during the forecast period.

Alkaline batteries have witnessed an upsurge in demand over the past few years and are extensively used in developed economies such as U.K., U.S., and Switzerland. Alkaline batteries are designed to deliver long-lasting performance and are majorly used in various electronic products such as clocks, radios, and remote-controls. The high run time and productivity have led alkaline batteries to showcase the highest market penetration.

Lithium-ion batteries offer an extended duration of power storage and these long-lasting batteries are used in all the portable instruments like toys, digital diaries, iPods, artificial pacemakers, calculators, and wrist and stopwatches. Owing to the increasing demand from electric vehicles, the lithium-ion battery industry is expected to witness the highest growth in the forthcoming years.

In terms of volume, the water treatment segment is projected to exhibit a CAGR of 2.8% during the forecast period. Electrolytic manganese dioxide is used in electrodes in water treatment plants as it separates waste from water. Asia Pacific has been experiencing a growth in the water purifier industry and this is expected to drive the demand for EMD over the foreseeable future.

North America accounted for USD 565.8 million in 2018 and held the largest market share. The region is anticipated to dominate the market throughout the forecast period. Electrolytic manganese dioxide is majorly employed in cathodes of batteries for power production, which is driving the regional demand for a primary and secondary battery, particularly for electric vehicles. This is the most substantial dynamic that is expected to propel the market over the forecast period.

Europe is anticipated to reach USD 346.9 million by 2025 owing to the growing demand in EV and battery-operated electronic devices. European governments are steadily investing in lithium-ion battery charging stations to surge vehicle sustainability, which is expected to play a pivotal role in the increasing demand for battery-operated vehicles in the forthcoming years. 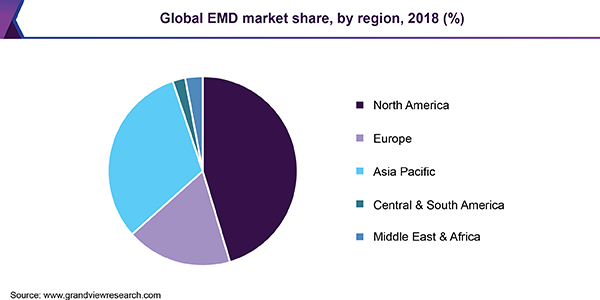 Asia Pacific accounted for 34.0% of the EMD market share in 2018 and is expected to gain traction over the forecast period due to the surge in demand from battery application. The acceleration in the demand for electronic products is projected to propel the regional market during the estimated time span.

Asia Pacific is the largest EMD producer in the world because it has been experiencing a rise in the power storage systems coupled with the increasing automotive electronics industry. This is driving the demand for EMD in this region and is expected to have a positive impact on market growth.

Despite the reduced prices of the international manganese ore, the market has foreseen a fierce competition. Additionally, the EMD is highly fragmented in nature due to declining prices and disappointing volumes. The top players in this market have adopted sustainable strategies to procure high-quality raw materials for long-term benefits. Along with this, these companies majorly concentrate on product safety.

These companies are looking forward to adopting the strategies of using advanced technologies and integrating value chains to accomplish economies of scale and higher profit margin. Mergers and acquisitions and joint ventures are some of the new strategies that are expected to be implemented by the companies for higher market penetration

This report forecasts revenue growth at global, regional, and country levels and provides an analysis of the latest industry trends in each of the sub-segments from 2014 to 2025. For the purpose of this study, Grand View Research has segmented the global electrolytic manganese dioxide market report based on application and region: