The industry has evolved significantly over the last few years owing to several new technological developments. Emergence of advanced consumer electronics such as smartphones, tablets, smart wearables and smart televisions is expected to drive the market over the next seven years. Moreover, increasing purchasing power across different sections of the society has opened up greater avenues for industry growth. 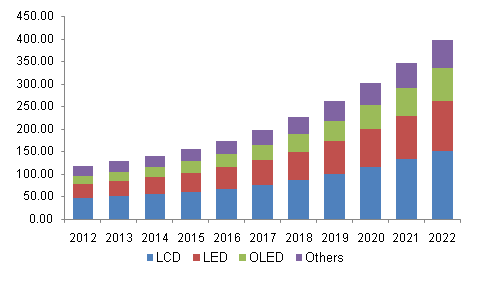 Manufacturers are bound to follow regulations such as the Waste Electronics and Electrical Equipment (WEEE)and Restriction of Hazardous Substances (RoHS) standards. These standards intend on to decrease the amount of harmful e-waste and handle critical issues such as reclamation & recycling of such devices.

Development of cutting-edge high resolution display technologies such as OLED and AMOLED in consumer electronic devices has positively affected the industry. However, the adoption of such innovative technologies involves high initial costs resulting in an increase in the cost of the device, and may hinder the market growth over the next few years.

LCD displays have dominated the market over the last few years. The segment accounted for over 35% of the total industry revenue share owing to the increasing applications in consumer electronics devices such as TVs, and personal computers. However, advanced LED and OLED display technologies are increasingly gaining popularity due high operational reliability and suitability towards various applications.

Display forms an essential component in every other consumer electronic devices and act as an interface between the user and the device. Consumer electronics application segment accounted for over 50% of the overall revenue in 2014 and is projected to grow steady over the forecast period.

Large scale adoption of digital signage across different end-use segments is expected favorably impact the market. Key developments such as advanced digital signage 2.0 that displays data by moving the infographics is widely used across the retailing industry thus resulting in the enrichment of the business strategy, brand using impressive aesthetics.

Advanced electronic displays are extensively used in a range of end-use segments including retail, entertainment, corporate, healthcare and government. Entertainment end-use segment accounted for approximately 30% of the overall revenue in 2014. Significant expansion of console and mobile gaming industry has significantly contributed to the growth of the segment.

Additionally, increasing use of digital signage in retailing industry coupled with surging adoption of modern the m-commerce retailing has made it the fastest growing application segment in the industry.

North America is expected to be the flourishing regional market and is expected to grow over the forecast period. High disposable incomes and improved lifestyle amongst the people is expected to generate a steady demand for such advanced display based applications.

Consumer electronics and smartphone producers are establishing alliances with display technology manufacturers in order to outsource the manufacturing of electronic display related components. For instance, Apple Inc. is known to procure advanced OLED screens for its flagship iPhone models from LG Display Co Ltd and the panel-making unit of Samsung Electronics Co Ltd since these screens offers better picture quality and they are thinner than the mainstay liquid crystal display screens.