The global embolic protection devices market size was estimated at USD 820.2 million in 2017 and is estimated to expand at a CAGR of 8.4% over the forecast years. Rising cases of cardiovascular, peripheral, and neurovascular surgeries and heavy investments in R&D of embolic devices are the prime factors propelling the market growth. Rise in number of Trans-catheter Aortic Valve Replacement (TAVR) procedures and consumer awareness regarding embolic devices are also contributing toward market development. 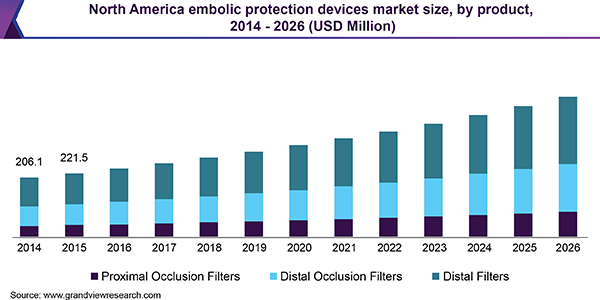 The number of TAVR centers in the U.S. has increased from 156 in 2012 to 511 in 2017, and approximately 35,000 patients underwent TAVR in 2016 in the U.S. alone. As per the statistics published by Brain Aneurysm Foundation (BAF), each year, brain aneurysm accounts for approximately 50,000 deaths. It also estimates that aneurysm is more predominant for the age group 40 to 60 years.

Government bodies along with Non-Governmental Organization (NGO) and educational institutes across various regions are engaged in spreading awareness about cardiovascular and neurovascular diseases and its possible treatment by launching awareness programs. This factor is also contributing toward the market expansion. However, the presence of alternatives treatment, such as the use of drugs, and high cost of medical devices may impede the market growth.

On the basis of product, the embolic protection devices market is segmented into proximal and distal occlusion systems and distal filters. The distal occlusion systems segment is expected to register the highest CAGR over the forecast period. The distal filters segment is also estimated to witness a strong CAGR due to the ease of use offered by these devices, non-interference with lesion visualization, and availability of these filters in different specifications.

As per statistics, published by the World Health Organization (WHO), in 2016, more than 1.9 billion adults were overweight and around 650 million people were obese due to sedentary lifestyle and unhealthy food habits. In the U.S. alone, around 288,500 people were suffering from spinal cord injuries in 2015. Thus, rising cases of neurovascular surgeries were primarily responsible for the growth.

Distal occlusion systems segment is anticipated to witness robust growth over the forecast period on account of advantages offered by these devices over other products, such as low crossing profile and minimum area requirement for the occlusion balloon. Moreover, the proximal occlusion systems came into picture recently and are expected to witness high demand and witness a strong CAGR over the estimated period. 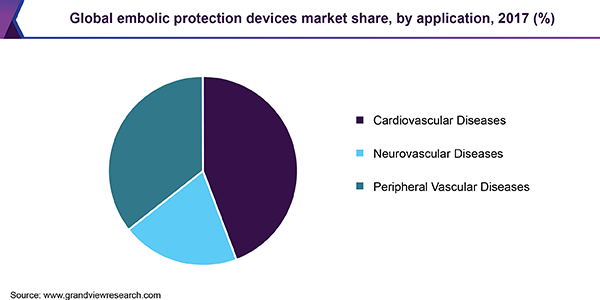 PVD is a blood disorder causing arteries and veins outside of the brain and heart to narrow due to formation of plaques after surgery. According to the Centre for Disease Control and Prevention (CDC), in the U.S., around 12-20% people aged 60+ years develop PVD. Thus, the peripheral diseases segment is anticipated to witness positive growth trajectory, owing to increased awareness about minimally invasive procedures and rising cases of lifestyle disorders.

Geographically, the market is segregated into North America, Europe, Asia Pacific, Latin America, and MEA. North America, followed by Europe, will account for the major share in the market. This growth is attributed to rising CVD cases, quick adoption of the latest technologies, and the presence of R&D centers. Asia Pacific is expected to witness lucrative in the next few years period attributing to investments from public and private entities, improvised healthcare infrastructure, rising disposable income.

Focus of major international companies on this region, due to availability of untapped opportunities, is also expected to propel the growth potential over the coming years. China’s geriatric population reached 220 million in 2016, and it is the only country in the world with geriatrics over 200 million. This factor is also contributing toward the region’s high growth rate.

The global market is highly competitive. Some of the key companies in the market include Boston Scientific Corp.; Edward Lifesciences; Abbott Laboratories; Medtronic Plc; Cardinal Health; Claret Medical, Inc.; Innovative Cardiovascular Solutions, LLC; Transverse Medical, Inc.; Claret Medical, Inc.; Gore Medical; and Allium Medical. In an attempt to retain their industry share and diversify the product portfolio, most of these companies have undertaken several market strategies, such as mergers and acquisitions.

This report forecasts revenue and volume growth at global, regional, and country levels and provides an analysis of the latest industry trends in each of the sub-segments from 2014 to 2026. For the purpose of this study, Grand View Research has segmented the global embolic protection devices market report on the basis of product, application, and region: