The global emission control catalyst market size was 1,978.0 kilo tons in 2015. Rising awareness towards reducing carbon footprints in the automotive sector in light of stringent regulations for controlling air pollution is expected to have a positive impact.

An emission control catalyst break down the solid particulates in engine exhaust systems of transportation vehicles and industrial machinery in order to reduce the content of harmful pollutants into the environment. Thus, the regional emission regulation policies, including National Ambient Air Quality Standards in the USA, Euro standards in Europe, and Bharat Stage emission standards in India, controls and restructures the emission control catalyst market to control the air pollution caused from numerous application areas 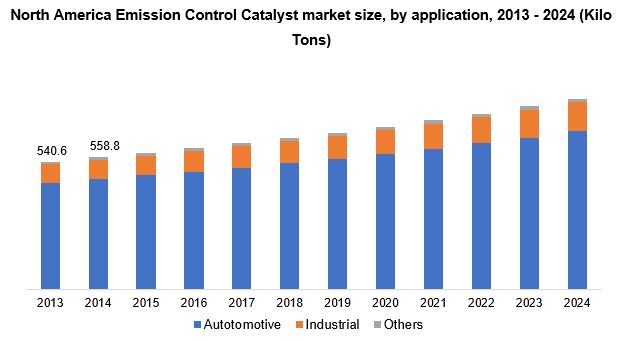 Over the past few years, leading automotive manufacturers including General Motors, BMW, Volkswagen and Ford Motors have increased their expenditure for the installation of catalytic converters in engine systems of finished products. This trend is expected to play a major role in increasing the usage of emission control catalyst in engine systems of automotive vehicles over the next eight years.

Increasing production of automobiles in emerging economies including China, Mexico, and Iran on account of rising domestic consumption of vehicles coupled with favorable government policies for market development may promote the utilization of these catalysts over the next few years. High growth of industrial and automotive sector is projected to upsurge the market growth over forecast period.

Fluctuating prices of platinum group metals in light of limited supply along with predominant consumption in jewelry and construction applications is expected to result in a price hike for emission control catalysts over the next eight years. Increasing expenditure on the development of platinum-rhodium-palladium (Pt-RH-Pd) by catalyst manufacturers is expected to open new market avenues over the next eight years.

Rhodium-based emission reduction catalyst demand was 828.2 kilo tons in 2015 and is expected to witness significant gains in light of its predominant use in the removal of nitrogenous oxide from exhaust emissions by three-way catalytic converters in automotive engines. In addition, rhodium metal is capable of exhibiting properties including high corrosion resistance and excellent thermal stability as compared to other metals.

Palladium is expected to witness the fastest growth at a CAGR of 4.7% from 2016 to 2024, in terms of volume. The product is likely to foresee tremendous improvement over the next eight years in light of low price and easy blending characteristics with platinum and palladium.

Platinum products accounted for 32.2% of global volume in 2015 and are expected to witness growth on account of being a suitable oxidation catalyst. The high price of platinum as compared to palladium and sensitive towards high-temperature conditions are likely to pose an adverse impact on the market over the next eight years.

Automotive was the largest application accounting for 83.5% of the total volume in 2015. Growing demand for automotive catalytic converters as an emission control medium is expected to have a substantial impact on the industry. Emissions from the industrial plants, automobiles, and other such sources, contains carbon dioxide along with other such compounds including nitrous oxides, carbon monoxide, and other extremely hazardous gases harming the environment. Thus, the implementation of regulations initiated by regional governments is expected to force automotive manufacturers to increase the usage of catalysts over the next eight years as catalysts control the emission of harmful gases.

Industrial applications are projected to foresee tremendous gains, at a CAGR of 4.9% from 2016 to 2024. Upscaling output in the manufacturing sector of China, India, and Turkey in light of regulatory support to promote investments at the domestic level is expected to boost the installation of diesel engines and gas turbine stations. This trend is anticipated to remain a vital driving force in the near future.

Asia Pacific was the largest market accounting for 32.9% of the global volume in 2015. The presence of robust automotive manufacturing facilities in China, Japan, South Korea and India owing to easy access to consumables is expected to have a substantial impact in the near future.

Europe is projected to witness growth at a CAGR of 4.3% from 2016 to 2024. The European Commission implemented the EU Emissions Trading System (EU ETS) in 2005, which is intended for providing incentives for reducing carbon gas emissions in over 11,000 power stations and manufacturing units in 31 countries of the region. This scheme is expected to play a crucial role in increasing the application of emission control catalyst over the next eight years.

Key industry participants are anticipated to keep their production units in vicinity to U.S., Germany, and the UK on account of the high presence of R&D infrastructure along with easy access to equipment. The major emission reduction catalyst manufacturers include BASF, Johnson Matthey, Solvay S.A., Umicore SA, and Corning Incorporated.

The companies mentioned above supply their products to key automotive catalytic converter manufacturers including Faurecia, SMPE, Magneti Marelli, and Tenneco. The enormous potential of the automotive industry in China, India, Indonesia, Malaysia and Thailand on account of increasing sales of automotive vehicles is expected to force the market players to invest in Asia Pacific.