The global end stage renal disease market size was valued at USD 68.0 billion in 2019 and is anticipated to expand at a CAGR of 12.4% over the forecast period. Increasing number of patients suffering from renal or kidney failure and introduction of technologically advanced products, such as low maintenance dialysis equipment and artificial kidney, are the major factors expected to drive the market. 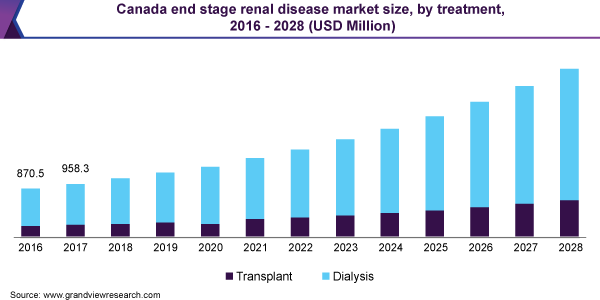 Chronic kidney disease is one of the major reasons behind the increase in the number of renal failure patients. According to the National Kidney Foundation (NKD), approximately 10% of the global population suffers from CKD and millions die each year. As per the estimations of the NKD, the number of cases will increase in the developing countries, such as China and India, especially among the elderly people, since the geriatric population is more prone to renal problems. The number of patients continues to increase at a rate of 5-7% per year and receives treatment with a kidney transplant or dialysis to stay alive. Chronic kidney disease is more common in women (15%) than men (12%).

Increasing number of patients suffering from hypertension and diabetes is another key factor driving the overall market. Approximately, one-third of the population with diabetes develop chronic kidney disease and it is the most common cause of end stage renal disease. Hypertension is mainly caused due to high blood pressure, which significantly increases the risk of end stage renal disease.

China, the U.S., Taiwan, Japan, Germany, France, Belgium, Africa, and Rest of Asia Pacific have witnessed the highest prevalence of end stage renal disease in the recent years. As per the estimation of Centers for Disease Control and Prevention (CDC) report 2016, in U.S., around 125,000 people received treatment for end stage kidney disease, whereas approximately 726,000 were on dialysis or living with a kidney transplant. Furthermore, it reported that around 80 million people, which is 1 in 3 American adults is at risk for chronic kidney disease and it is the ninth leading cause of death in the U.S. Therefore, such high prevalence of end stage kidney disease is anticipated to boost the market growth over the forecast period.

Increasing incidence of end stage renal diseases in the developed and developing countries has driven the launch of technologically advanced products in the market for end stage kidney disease. For instance, in February 2014, the first human clinical trials of blood purification technologies for designing Wearable Artificial Kidney 2.0 was approved by the U.S. FDA. This innovation is intended to obtain satisfactory and effective results from patients suffering from end stage renal failure. Thus, technological advancements in the treatment of end stage renal disease is another factor expediting the overall market growth.

The dialysis segment dominated the end stage renal disease market in 2019. Dialysis is more convenient and easier to obtain for a patient with end stage kidney disease and the whole process can be done at a dialysis center or at home. Moreover, patients don’t have to depend on donor organs, which are available in a very limited number as compared to dialysis equipment. Patients in developing, highly populous, or low-income countries can only obtain dialysis as compared to transplantation procedures. Thus, benefits offered by dialysis are expected to fuel the segment growth. 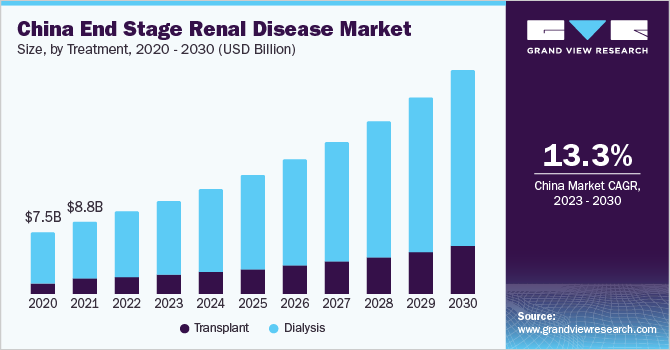 The National Institute of Health (NIH) has declared the month of March as National Kidney Month in order to help raise awareness regarding kidney diseases. Thus, presence of numerous awareness initiatives is expected to result in the increase in the number of patients willing to test for end stage renal disease. Growing patient population with chronic kidney disease shall therefore opt for peritoneal dialysis or hemodialysis, which will further increase the demand for the treatment of end stage kidney disease.

Asia Pacific dominated the market in 2019 due to increasing healthcare spending, government initiatives, rising awareness campaigns regarding CKD, technologically enhanced products, and presence of newly-established state-of-the-art healthcare facilities in the region. High blood pressure and diabetes are the major risk factors for the development of kidney disease. Asia Pacific is estimated to have the largest population of diabetics and hypertension patients worldwide, closely followed by Africa. This is expected to drive the demand for the treatment of end stage renal disease in the region.

Asia Pacific is also expected to expand at the highest CAGR during the forecast period due to factors such as growth in the aging population, various lifestyle stress, improvement in the quality of diagnosis, and increasing patient affordability. Middle East & Africa is estimated to closely follow Asia Pacific in terms of CAGR over the forecast period. The African-Middle East ethnicity has been observed to be the most prone to CKD in the global population. The incidence rate of CKD among the African-Middle Eastern countries stands at 18-23% of the total population, which is significantly higher than global population.

For instance, in October 2019, Fresenius Medical Care has received breakthrough device designation by the U.S. FDA for its new hemodialysis machine that aims to prevent blood clotting without the use of any medication. Additionally, few market players are introducing technologically advanced products to gain competitive advantage over their competitors. Advancements in the field of end stage kidney disease devices are anticipated to boost the market growth over the forecast period.

This report forecasts revenue growth at the global, regional, and country levels and provides an analysis on the latest industry trends and opportunities in each of the sub-segments from 2016 to 2027. For the purpose of this study, Grand View Research has segmented the global end stage renal disease market report on the basis of treatment and region: