The global endoscopic vessel harvesting system market size was estimated at USD 1,881.7 million in 2016. Increasing grants and investments by government bodies in endoscopic technology are expected to raise the demand for endoscopic medical equipment. This represents a good opportunity for medical device manufacturers in the U.S.

In addition, the increasing number of product launches is one of the factors that indicate the surging R&D investment by various significant market players, such as Terumo Cardiovascular Systems Corporation and Maquet Holding B.V. & Co. KG. For instance, VirtuoSaph Plus EVH System received 510(k) premarket notification under class II medical devices by the U.S. FDA in April 2016.

The technological advancements and innovation pertaining to the cardiovascular medical devices market are anticipated to drive growth. The introduction of endoscopic vessel harvesting (EVH) systems in the field of cardiac and vascular surgeries, such as Coronary Artery Bypass Grafting (CABG), has led to further expansion of opportunities for various medical devices companies. The growing number of start-ups, such as Saphena Medical, Inc., that are investing in their R&D activities is also among the few factors expected to boost the market during the forecast period.

In December 2016 the U.S. Centers for Medicare & Medicaid Services (CMS) announced the episode-based payment initiatives for the CABG model. The initiative implies that acute care hospitals will participate in a retroactive bundled payment initiative related to CABG treatment, which starts with hospitalization and is allowed to extend for 3 months following hospital discharge. Till February 2017, 1,096 hospitals participated in this model.

The advances in percutaneous intervention have led to reducing the number of CABG performed each year. However, the growing adoption of EVH systems in CABG surgeries and an increasing preference for minimally invasive surgeries are some of the key contributing factors that exhibit the surge in growth over the forecast period.

The EVH system market is segregated on the basis of product type: reusable and disposable. Reusable harvesting vessel systems emerged as the leading product category and accounted for over 66% of the total revenue in 2016. The commercial availability of reusable systems and the huge adoption of such devices in CABG surgeries, especially in the emerging economies, are some of the key factors that can be accounted for its revenue share in 2016. However, the growing incidence of infections caused by endoscopes is one of the factors that are likely to impede growth.

The market is majorly dominated by few products namely Endoperfect System, Venapax Vein Harvesting, Cardio Vision EVH System, VascuClear EVH, Maquet EVH systems, and Virtuosaph Plus. However, the disposable system is expected to be the fastest-growing segment in the coming few years owing to the growing safety concern amongst healthcare professionals. The rapid technological improvement in disposable systems is also one of the pivotal factors anticipated to boost demand. 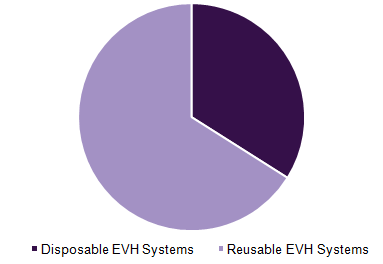 Some of the frequently used commercially available disposable systems are VasoView HEMOPRO, VirtuoSaph, and VascuClear EVH. The companies such as Maquet Holding and Sorin Group have invested majorly in R&D to further develop advanced disposable systems such as VASOVIEW 6 PRO EVH and VascuClear by Maquet Holding and Sorin Group, respectively. The growing demand for disposable surgical equipment is one of the factors expected to propel the disposable medical supply market. It has grown significantly due to the safety and convenience of the patient population.

Various organizations, such as the Pediatric Congenital Heart Association and Heart Valve Surgery Community, work on spreading awareness about heart diseases, provide education on congenital heart diseases, and conduct researches. The rising awareness among surgeons regarding new technologies pertaining to cardiac surgeries is anticipated to impel the growth of disposable EVH systems over the forecast period. Moreover, the increasing geriatric population with cardiovascular diseases and the population of more susceptible to various infections are among the determinants expected to propel the demand for disposable EVH systems during the forecast period.

North America was the leading EVH system market and accounted for around 39% of the total market revenue in 2016. Emerging economies such as India, China, and Brazil have been experiencing strong economic growth. Increasing population and rising cardiovascular disorder have spurred the demand for CABG surgeries in the region. Growing disposable income has triggered consumers to avail technologically advanced medical treatment and therapies.

U.S. was the leading EVH system market in 2016. It is also anticipated that the U.S. will hold the largest revenue share over the forecast period owing to the presence of favorable reimbursement policies related to the endoscopes and high incidence of coronary diseases among the U.S. population, due to huge adoption of a sedentary lifestyle. Based on the data published by the U.S. CDC, approximately 370,000 people die due to coronary heart diseases. Moreover, the easy availability of technologically advanced minimally invasive CABG surgeries is another crucial factor expected to drive the U.S. market.

However, Asia Pacific is expected to be the fastest-growing region in the coming few years. This region is anticipated to deliver enormous growth due to the growing medical tourism industry, increasing per capita income, surging healthcare spending by the government, and increasing public awareness regarding various coronary surgeries. China is anticipated to be the fastest-growing segment in the Asia Pacific region.

In addition, Latin America is expected to follow the Asia Pacific region with a CAGR of 7.1%. Various countries in the Latin American region such as Colombia and Argentina are gaining importance due to the rising medical tourism industry that caters to the global demand for low and affordable cardiac procedures. Therefore, the medical sector in these countries is transforming quite fast, thereby generating huge demand for advanced systems such as EVH systems.

Growing investments in R&D activities and new product development are expected to be key parameters for maintaining a competitive edge, with frequent partnerships being undertaken as an attempt to diversify product portfolios and gain market share. Various recent product launch and awareness campaigns by players such as Getinge Group, Key Access Institute, LLC, and others are also among few strategies to increase the adoption rate of EVH systems.

This report forecasts revenue growth at global, regional, & country levels and provides an analysis of the industry trends in each of the sub-segments from 2014 to 2025. For the purpose of this study, Grand View Research has segmented the global endoscopic vessels harvesting systems market on the basis of product and region:

How big is the endoscopic vessel harvesting system market?

b. The global endoscopic vessel harvesting system market size was estimated at USD 2.21 billion in 2019 and is expected to reach USD 2.33 billion in 2020.

What is the endoscopic vessel harvesting system market growth?

b. North America dominated the endoscopic vessel harvesting system market with a share of 39% in 2019. This is attributable to increasing population and rising cardiovascular disorders which have spurred the demand for Coronary Artery Bypass Grafting surgeries in the region.

Who are the key players in endoscopic vessel harvesting system market?

What are the factors driving the endoscopic vessel harvesting system market?

b. Key factors that are driving the market growth include growing inclination of the patient population toward minimally invasive cardiac surgeries, technological advancements and innovation pertaining to the cardiovascular medical devices.