The global ERP software market size was valued at USD 27,648.0 million in 2014. Need for efficiency and transparency in organizations is expected to propel demand over the forecast period. In addition, increasing demand from aerospace & defense and government utilities owing to requirement of streamlined processing in industries is expected to play a major role in fueling growth over the forecast period. 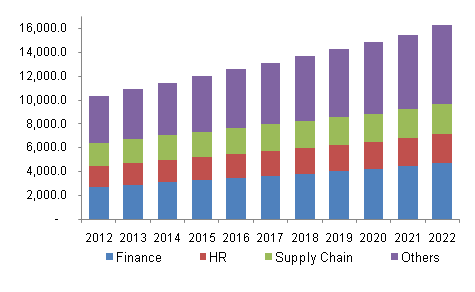 ERP facilitates integration of various processes within an organization and smooth flow of cross functional information, thus allowing better productivity and decision making. Rising number of SMEs in developing economies especially China, India, and Brazil is expected to boost product demand over the next seven years. In addition, penetration of IT technologies in these regions is expected to change consumer behavior leading to increased adoption of ERP software instead of manual operations.

ERP implementation in an organization can lead to reduction of inventory cost by 25% to 30% and raw material cost by around 15%. In addition, it leads to increased profitability for a firm, thus boosting demand over the forecast period.

The product in finance function accounted for over 22.0% of the market share in 2014. Ease of managing various financial activities including accounting, investment, assets management, and cash flow management is expected to augment demand over the forecast period.

Human resource segment accounted for a significant share in the market owing to rapid expansion of organizations which makes it difficult to organize all the processes a company. In addition, increased automation demand for HR processes is expected to product growth over the forecast period.

ERP software based on on-premise deployment accounted for over 60.0% of the market share in 2014. On-Premise deployment model offers benefits such as continuous control and high security of data in an organization, which is expected to drive the industry over the forecast period

Manufacturing & services accounted for over 15.0% of the market share in 2014. ERP software manages operations including monitoring of daily operations, tracking day-to-day performances, and customer services which is expected to augment demand over the forecast period. In addition, ease of inventory management, production scheduling, and real time data tracking is expected to propel growth.

Government utilities accounted for a significant share of the market owing to adoption of IT infrastructure. In addition, high acceptance of ERP software in North America and Europe is expected to augment growth over the next seven years.

Medium enterprises accounted for over 40.0% of the market share in 2014. Factors including increased operational efficiency, reduced production cost, and on-time product delivery are expected to augment demand over the forecast period. In addition, expansion of firms requires proper management of data bases which is expected to further propel demand. Furthermore, compliance of stringent government regulations in various industries has facilitated utilization of ERP software which can increase productivity and reduce complexity of operation in numerous industries.

North America accounted for a share of over 40.0% in the ERP software market. Rapid technological advancement in ERP software coupled with the presence of numerous market players is expected to augment growth over the forecast period. In addition, application of ERP software with mobile devices is expected to propel demand over the next seven years.

Europe accounted for a significant share in the market owing to recovery of manufacturing industries in the region. According to the European Union (EU), 26% of European enterprises used ERP software in 2013, an increase of 5% compared to 2010, thus augmenting demand. Moreover, the presence of numerous market players including Unit4, Syspro, Oracle, and SAP is expected to augment demand over the forecast period
Asia Pacific market is expected to grow on account of the booming manufacturing sector. A large number of enterprises in the region has now implemented on-premise ERP solutions in an effort to improve productivity and performance of their business. In addition, government support on implementation of IT infrastructure is expected to augment demand over the next seven years.

The market is fragmented with numerous companies operating worldwide. Many players including Microsoft, Oracle, and IBM are integrated across the value chain. New product development and acquisitions are some of the key strategies adopted by the companies.