One of the major reasons for anemia is Chronic Kidney Diseases (CKD). Rising incidence of CKD is the key contributing factor responsible for the growing demand. According to statistics published by the National Institute of Diabetes and Digestive and Kidney Diseases (NIDDK), approximately 661,000 people are affected by kidney failures in the U.S., and the number is projected to increase in the near future. This is anticipated to fuel the demand for the market further.

Patent expiration of major biologics during the coming years creates opportunities for the entry of erythropoietin biosimilars in the market. For instance, Amgen’s patent for Epogen expired in 2015, which offered tremendous opportunities for other companies to enter the industry. Hence, it is expected that there will be an increase in the number of new entrants investing in the market, leading to growth.

The prevalence rate of cancer, HIV, and CKD in developing countries is high, which serves as an important opportunity for drug manufacturers to expand their presence in this market. There is an increased demand for low-cost therapeutics in developing countries such as Asia Pacific and Middle East &Africa, which has triggered the production of biosimilars for EPOs in such regions. Growing utilization of biosimilar EPOs is anticipated to boost the growth of the overall EPO market in the coming years.

Of the various drug classes, the biologics erythropoietin class held a dominant share as of 2016, owing to patent protection. Presence of large patient population and higher uptake of biologics are other contributing factors towards its dominance. In addition, the availability of very few biologics in the market has led to increased adoption. Furthermore, owing to its wide applications in the treatment of CKD, the biologics segment accounted for the majority of the revenue share.

The biologics segment is anticipated to lose its market share due to recent patent expiration of major brands such as Epogen. This drug lost its patent exclusivity in May 2015, which resulted in reduced sales revenue for its manufacturer company, Amgen Inc.

Increasing investments in R&D for biosimilars, strong product pipeline, and collaborations between hospitals &manufactures for the adoption of EPO biosimilars are key market drivers for the growth of the biosimilar segment. The recent launch of erythropoietin biosimilars in the U.S. is further expected to showcase a paradigm shift in global EPO drugs from biologics to biosimilars.

In the product segment, Epoetin-alfa held a dominant share due to its wide adoption amongst healthcare professionals. This product was the first biologic to be approved by the U.S.FDA for the treatment of anemia resulting from CKD, cancer chemotherapy, and HIV treatment. Epoetin-alfa was patent-protected, which restricted the production of any other recombinant human erythropoietin drug and helped this segment dominate in 2016.

Epoetin-beta is a recombinant form of epoetin-alfa. This segment held a considerable share in the products segment owing to its benefits such as improved efficacy and a longer half-life in comparison with epoetin-alfa. NeoRecormon, developed by F. Hoffman-La Roche, is the first drug containing epoetin-beta as the active ingredient.

Darbepoetin-alfa is yet another novel erythropoietin drug developed by Amgen, Inc., which is marketed under the brand name Aranesp. The patent for this drug expires in 2024 in the U.S. Until this period, this drug enjoys patent exclusivity rights in the U.S. In Europe, the patent for Aranesp expired in 2016, due to which the sales of this drug have decreased in this region.

Darbepoetin-alfa is anticipated to witness positive growth in the future due to its cost-effectiveness, improved efficacy, and longer half-life. This is a viable solution for the treatment of anemia rising from end-stage renal diseases. Research is being undertaken for the discovery of new therapeutic areas for the application of darbepoetin-alfa, which is expected to serve this industry with growth potential.

Other medications such as epoetin-zeta and epoetin-omega are expected to exhibit a lucrative growth rate in the coming years. These are biosimilar formulations of epoetin-alfa but are more effective in the treatment of anemic conditions. EporatiobyTeva Pharmaceutical Industries, Ltd. and Mircera by F. Hoffmann-La Roche Ltd. are major products in this segment.

Renal diseases held a dominant share as prevalence of anemia is increasing at a constant rate. The first erythropoietin drug, Epogen was approved by the U.S. FDA for the treatment of anemic indications arising from CKD. Owing to early introduction of this drug for the treatment of CKD and rising incidence of the same, this segment dominated as of 2016.

The cancer segment is expected to be the fastest-growing segment owing to the increasing number of cancer incidence worldwide. Cancer chemotherapy involves the use of medication that reduces the RBC count amongst patients. As a result, usage of these alongside chemotherapy has become common in recent years. This has resulted in increasing demand for EPO drugs for cancer treatment, which augments growth.

The hematology segment is anticipated to witness steady growth over the forecast period due to rising R&D initiatives to develop cost-effective and viable solutions for treating conditions such as hypoxia and anemia of prematurity. Proper dosage of recombinant human erythropoietin can cure anemia of prematurity and reduces the need of multiple blood transfusion in neonates. This is expected to serve this industry with growth potential.

The neurology segment is expected to showcase growth over the forecast period as many of the erythropoietin drugs are considered to be an effective solution for treating neurological disorders such as Parkinson’s disease. Companies are involved in discovering new therapeutic areas for application of erythropoietin-stimulating agents, apart from the treatment of anemia. Major therapeutic research is being carried out for the neurology segment.

North America held a considerable share of erythropoietin drugs as of 2016 owing to increasing incidence of chronic diseases such as cancer, CKD, and HIV. According to the Centers for Disease Control and Prevention (CDC), 1.2 million people in the U.S. are living with HIV and 39,513 cases were diagnosed in 2015. These statistics indicate the need for EPO drugs over the forecast period.

In order to satisfy unmet needs, favorable reimbursement policies for HIV treatment are developed by the U.S. government. This would in turn provide a healthy platform for the growth of the North American EPO market. Furthermore, owing to the patent expiration of biologics, numerous new players have entered the market in this region and are undertaking various strategic steps to gain more revenue share. For instance, in October 2016, Teva Pharmaceutical Industries Ltd. acquired Anda, Inc., a leading distributor of generics in the U.S. from Allergan, plc., thereby strengthening its distribution network. 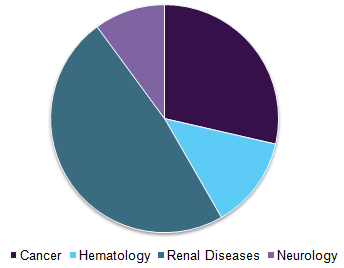 The Asia Pacific EPO industry is anticipated to grow at the fastest CAGR due to continuous rise in the incidence of chronic diseases coupled with high demand for low-cost therapeutics. Asia Pacific has attracted significant interest in many companies for the development of biosimilars and is known for developing more biosimilars, than anywhere else in the globe.

Moreover, increasing government initiatives to provide better health amenities to public in this region is another contributing factor for market growth. For instance, the Japanese government has passed a regulation to price biosimilars at a discount of 30% in comparison to making it available to people belonging to lower economic class at subsidized prices.

This industry is witnessing significant growth owing to the patent expiration of biologics. This has attracted several local and international players to invest in the production of erythropoietin drugs. The key factor responsible for the rising participation of various companies is to cater to the growing demand for anemia treatment.

The industry is competitive in nature with key players involved in continuous product development and partnership alliances to aid market penetration. Rising number of distributors and dealers are also expected to elevate industry rivalry in the near future.

Industry players are involved in extensive R&D activities. Many biosimilar products are under clinical trials in the U.S. & Europe, which are expected to gain approval over the coming years. Thus, owing to the aforementioned factors, competitive rivalry for this market is expected to be high throughout the forecast period.

This report forecasts revenue growth at global, regional, & country levels and provides an analysis of the industry trends in each of the sub-segments from 2014 to 2025. For the purpose of this study, Grand View Research has segmented the global erythropoietin drugs market on the basis of drug class, product, application, and region:

What is the erythropoietin drugs market growth?

Which segment accounted for the largest erythropoietin drugs market share?

b. North America dominated the erythropoietin (EPO) drugs market with a share of 43.5% in 2019. This is attributable to increasing awareness about chronic diseases and its treatment, favorable reimbursement policies, and the high presence of major players.

Who are the key players in erythropoietin drugs market?

What are the factors driving the erythropoietin drugs market?

b. Key factors that are driving the market growth include the introduction of new erythropoietin drugs, increasing incidence of chronic diseases, and increasing R&D activities for the development of novel drugs.

How big is the erythropoietin drugs market?