The global ethnic wear market size was valued at USD 77.6 billion in 2020 and is anticipated to expand at a compound annual growth rate (CAGR) of 6.3% from 2021 to 2028. There has been a high demand for ethnic wear of various countries across the world because of globalization, movement of culture & tradition in conjunction with individuals visiting and staying in numerous countries. COVID 19 crisis has taken the globe by surprise. All industries and businesses around the world are plagued by the pandemic in a way or another. The textile and apparel business was one in every of the toughest hit industries following travel, with lockdowns and changes in client habits, and the retail sales have gone down. More importantly, sales channels and buying behavior have changed. These changes not only affected product quantities, but also product types and distribution channels. With these changes, the effects on the industry are not limited to a change in capacity, but extend to the production models and will permanently disrupt value chains in the medium and long term. 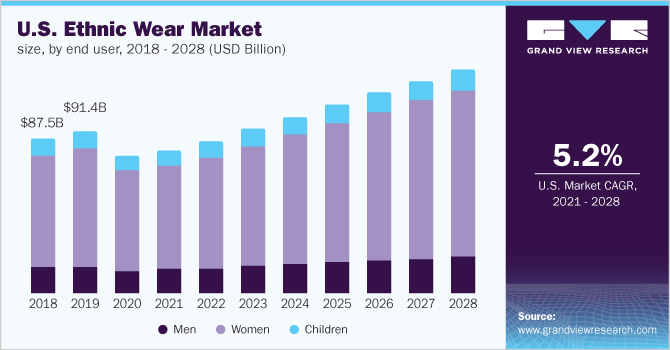 Increasing fashion awareness, rapid urbanization, and changing lifestyles are factors driving the growth of the market among men, women, and children. Due to the religious and cultural diversity around the world, a wide variety of occasions are celebrated. During such festive occasions, consumers tend to buy ethnic clothing for both personal use and gifts as brands often find new trends and designs that coincide with festive occasions. These occasions often drive the growth of ethnic clothing.

The ethnic wears are known for elegance and charm, and represent a unique line of clothing that comes in vibrant colors, patterns, and designs. As the clothing industry continues to break its own frontiers, and extend its market reach using e-commerce to link up with the rest of the world, the market for ethnic wear has continued to grow at a tremendous rate. For instance, the traditional glamour and opulence of Indian wear combined with the formality and comfort associated with western wear produced a line of cloth that appealed to the global civilization and increased the popularity of Indian ethnic wear in the worldwide market.

Convenience, comfort, and style have been the main drivers behind the growth of the modern, organized format in the ethnic clothing segment. Organized suppliers offer ready-to-wear products that attract the attention of younger consumers. Other trends are major emerging markets that are helping this segment grow. it is the gradual increase in the number of women in the corporate workforce. For instance, according to the data released by The Global Economy in 2019, the female labor force in Nepal was valued at 55.7% in 2019 as compared to 51.2% in 2012. Similarly, according to the same source, the female labor force participation rate in India was valued at 20.3% in 2019 as compared to 20.2% in 2018.

In terms of value, the women end-user segment dominated the market for ethnic wear and accounted for the largest revenue share of around 73.0% in 2020. The women’s segment is projected to witness a CAGR of 6.6% over the forecast period. The rising female population and increase in the female workforce are the factors contributing to the demand for ethnic wear worldwide. For instance, according to The World Bank Group, the female labor force participation rate in 2019 in Saudi Arabia was 19.77%. Furthermore, according to Brookings Institution, the labor force participation rate in Saudi women increased from 20% in 2018 to 33% in 2020.

The men’s ethnic wear segment accounted for a revenue share of 16.4% in 2020 and is projected to witness a CAGR of 6.2% over the forecast period. The growing craze for fashion among millennials, the growing number of aspiring fashion designers, and the emergence of mass and digital marketing strategies by fashion brands have fundamentally changed the market for ethnic wear for men globally. Ethnic wear plays a major role in during festivals and weddings. The evolving personal style and approach of fashion by men has created a significant amount of demand for ethnic wear in the coming years.

In terms of value, the offline distribution channel segment dominated the market for ethnic wear and accounted for the largest revenue share of over 63.0% in 2020. This segment is projected to progress with notable CAGR over the forecast period. A prime factor driving the segment is increasing consumer preference for purchasing high-end ethnic wear from brick-and-mortar stores. Moreover, this purchasing model offers a rich experience of shopping and makes it easier for the consumers to understand the exact size and quality of the product.

The online store segment is projected to witness a CAGR of 6.7% over the forecast period. The pandemic caused consumers to reassess their life priorities, which resulted in new values â€‹â€‹and spending criteria. The increasing reliance on technology, technical performance, and the online payments sector is driving consumer behavior away from traditional methods. 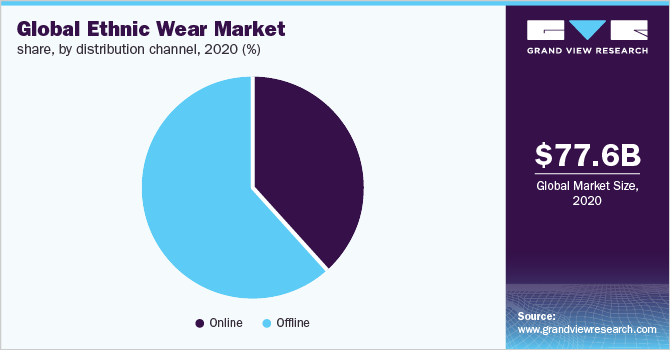 The shift to online models has shifted consumer demand from physical stores to online retail, a trend that existed before the COVID-19 pandemic. However, accelerated earlier during the crisis. This shift to online retail also affected the types of products purchased, with consumers opting for more basic clothing at the expense of fashion and luxury items.

In recent years, the e-commerce sector has in itself seen tremendous growth in the country. The opening up of the market by e-commerce platforms gave local brands the opportunity to compete globally. The increasing use of these platforms by Indian fashion brands has helped them to reach the global fashion market, leading to an increase in the international demand for Indian ethnic wears with buyers looking to purchase traditional embroidered sarees, kaftans, tunics, and kurtis that are available on online stores.

North America held a considerable market share in 2020 and is projected to witness a CAGR of 5.1% over the forecast period. Due to the rise in the population of American Indians in North America there is a huge demand for ethnic wear. According to the data released by U.S. Census Bureau in 2020, the American Indian and Alaska Native population increased from 5.2 million in 2010 to 9.7 million in 2020 which is an 86.5% increase.

There are numerous small- and medium-scale retailers, which make the market for ethnic wear highly fragmented. Many players in the market are opening their retail stores to resume their offline expansion and continue their growth momentum during the global health crisis and economic slowdown. For instance, In August 2021, BIBA Apparel launched the 35th flagship store in Delhi which has a large-scale digital screen at the store to engage the customers visually and offer a seamless shopping experience to consumers. Some of the prominent players in the ethnic wear market include:

This report forecasts revenue growth at global, regional, and country levels and provides an analysis of the latest industry trends in each of the sub-segments from 2016 to 2028. For the purpose of this study, Grand View Research has segmented the global ethnic wear market on the basis of end-user, distribution channel, and region:

How big is the ethnic wear market?

What is the ethnic wear market growth?

Which segment accounted for the largest ethnic wear market share?

b. In terms of value, the Asia Pacific region dominates the market in terms of market share in the year 2020. In recent years, the e-commerce sector has in itself seen tremendous growth in the country. The opening up of the market by e-commerce platforms gave local brands the opportunity to compete globally.

Who are the key players in ethnic wear market?

What are the factors driving the ethnic wear market?

b. There has been a high demand for ethnic wear of various countries across the world because of globalization, movement of culture & tradition in conjunction with individuals visiting and staying in numerous countries.