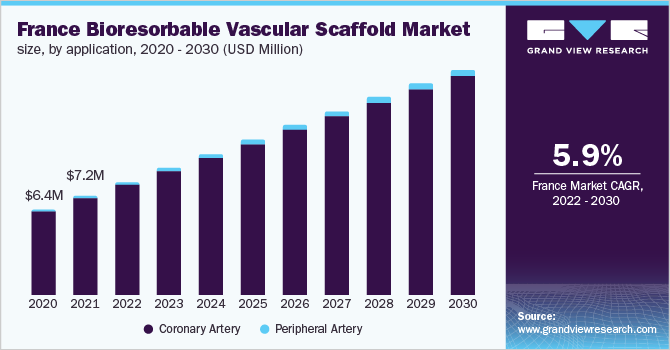 For instance, R3 Vascular's latest investigational scaffold, MAGNITUDE, was created to revolutionize interventional cardiology. Using the company’s unique bioresorbable technology and the lessons learned from its first and second-generation devices, APTITUDE and FORTITUDE, respectively, MAGNITUDE was created. MAGNITUDE is the thinnest bioresorbable scaffold created to date with diameters in the sub-100 m range. Therefore, the development of such technologies encourages the expansion of the industry.

Since a stent is typically utilized during Percutaneous Coronary Intervention (PCI) procedures, the effect of COVID-19 on the market closely paralleled that of COVID-19 on PCI procedures as a whole. Countries ordered individuals to stay indoors or take precautions to reduce their exposure to and risk of spreading the illness during the pandemic which led to the postponement of elective procedures. As a result, total PCI procedure volumes-and consequently, sales and profits of bioresorbable vascular scaffold units-went dramatically lower in 2020. These revenues are expected to pick up pace as healthcare facility usage increases and all semi-elective to non-urgent procedures restart at full capacity.

Rising manufacturers' emphasis on obtaining regulatory approvals for new products to enter the market is a continuing trend observed. For example, Meril Life Sciences, an Indian company, became the first to gain the European Conformity marking for their "MeRes100" bioresorbable scaffold or dissolvable polymer stents in August 2019. Abbott's decision to stop selling Absorb had an impact on market development. Because of Abbott's failure and the linkage to the polymer itself, nearly everyone utilizing the polylactic acid polymer stopped using it or withdrew their products. For instance, Boston Scientific's decision to discontinue its Renuvia BRS entire project in 2017.

To create thinner struts and lower crossing profiles, new-generation BRSs employ materials that are absorbable and have stronger mechanical qualities, overcoming the pre-BRS limits and achieving widespread application. Therefore, the novel technology advancements such as new-generation BRSs with higher results contributed to the expansion of the Europe bioresorbable vascular scaffold market over the forecast period.

According to the European Heart Network, cardiovascular disease (CVD) results in about 1.8 million fatalities in the European Union and 3.9 million deaths overall in Europe each year (EU). 37% of all deaths in the EU and 45% of all deaths in Europe are attributed to CVD. On the other hand, Peripheral artery/vascular stents are expected to grow at a CAGR of %. Reva Medical announced in August 2018 that its Motiv bioresorbable scaffold had received CE mark clearance for the treatment of below-the-knee peripheral artery disease. Motiv is the first drug-eluting bioresorbable scaffold.

The hospitals held the dominant revenue share of over 98.0% as of 2021. Hospitals are important within the overall healthcare system and the main revenue source for the entire sector, which drives research and innovation. Thus, corporations are making significant efforts, both in terms of revenue & marketing strategies, to endorse their product/services in hospitals. As hospitals offer superior care to patients thus witnessing lucrative growth.

The growing elderly population necessitates the need for frequent access to healthcare services since as people age, their immune systems deteriorate and they become more susceptible to various illnesses and disorders, which increases the need for hospitals. The region's well-developed healthcare infrastructure, which includes hospital beds, equipment, and increased government funding, is anticipated to hasten the growth of the hospitals. 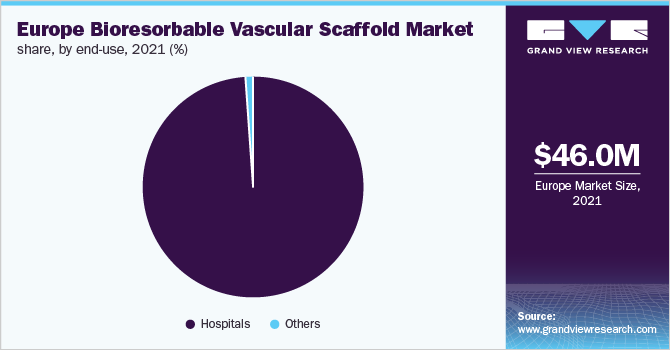 The others are inclusive of CAD & PAD centers and ambulatory surgery centers. Ambulatory surgery center offers a convenient substitute to hospitals with the same quality of care at a lower cost to individuals. The increase in outpatient admissions can also be attributed to the growing acceptance of technologically advanced techniques in centers, rendering treatment cost-effective and speedier. Innovative surgical methods in such settings allow tests and procedures to be performed without hospital admission. This is expected to support the growth of the segment.

France dominated the market in 2021 with a revenue share of over 15% owing to the raising awareness of next-generation technologies in PCI treatment. Terumo Corporation announced in March 2014 that it has reached an agreement with Arterial Remodeling Technologies S.A., a French firm producing bioresorbable scaffold technology, regarding exclusive acquisition rights for the treatment of coronary artery disease. In addition, the two businesses will collaborate on the development of a drug-eluting bioresorbable scaffold, with Terumo continuing to invest in Arterial Remodeling Technologies' R&D. Such agreements are anticipated to impact the country's growth.

Belgium is anticipated to grow significantly over the forecast period. Bioresorbable vascular scaffolds (BVS) have become a viable alternative in recent years. The FOUNDATION FOR RESEARCH AND TECHNOLOGY HELPS (FORTH)-led InSilc project has started development on an in silico clinical trial platform with assistance from specialists from Greece, Belgium, Ireland, Italy, Netherlands, Serbia, U.K., and the U.S. To evaluate, quantify, and monitor the scaffold's performance, a "virtual" drug-eluting BVS is to "virtual" patients. Consequently, the aforementioned elements contribute to the country's growth.

The market scenario is changing as the bioresorbable vascular scaffold market is gradually fragmenting owing to new players. For instance, in May 2021, a study of patients with relatively simple coronary artery lesions revealed some early promise for a novel bioresorbable scaffold (Firesorb, MicroPort Medical).

This report forecasts revenue growth at regional and country levels and provides an analysis of the latest industry trends in each of the sub-segments from 2017 to 2030. For this study, Grand View Research has segmented the Europe bioresorbable vascular scaffold market report based on application, end-use, and region: 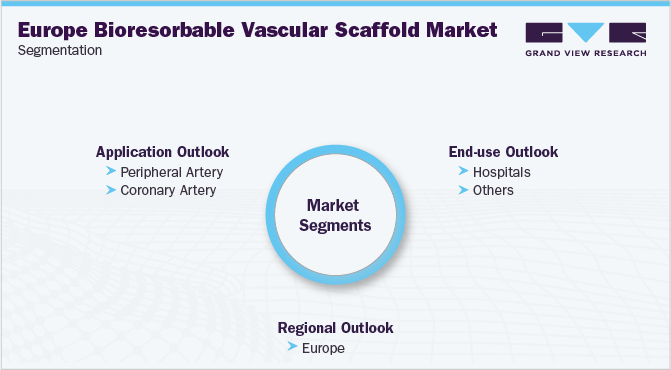 How big is the Europe bioresorbable vascular scaffold market?

b. The Europe bioresorbable vascular scaffold market size was estimated at USD 46.03 million in 2021 and is expected to reach USD 52.16 million in 2030.

What is the Europe bioresorbable vascular scaffold market growth?

b. France dominated the Europe bioresorbable vascular scaffold market with the highest share in 2021. This is attributable to its developed healthcare infrastructure, presence of private players, and raising awareness of next-generation technologies in PCI treatment.

Who are the key players in Europe bioresorbable vascular scaffold market?

What are the factors driving the Europe bioresorbable vascular scaffold market?

b. Key factors driving the Europe bioresorbable vascular scaffold market growth include the rising prevalence of risk factors such as diabetes, obesity, and an aging population. In addition, technological advancement in the bioresorbable vascular scaffold, and a robust product pipeline, are other factors expected to drive the growth of the market.