The Europe civil engineering market size was valued at USD 2,004.2 billion in 2018 and is expected to grow at a compound annual growth rate (CAGR) of 2.7% from 2019 to 2025. Rising investments in the construction industry are expected to drive market growth over the forecast period. The growth can be attributed to the rising population, majorly in the U.K., Belgium, and Ireland, among other countries, owing to migration within the region. 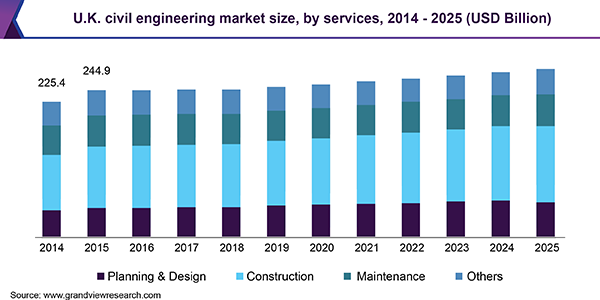 Factors such as rapid urbanization & industrialization in emerging economies in Eastern Europe and the rising importance of green building projects to enhance the energy efficiency of non-residential buildings are expected to drive the growth of the market over the forecast period. Rising government investments for the advancement of infrastructure in Poland and Finland are also expected to boost industry growth.

In the U.K., the construction sector accounted for a revenue share of over 42.7% in 2018 and is expected to continue its dominance over the forecast period. Major factors driving the growth of the segment include housing shortage in the U.K. with over 88% of the population living in urban areas and increasing purchasing power of consumers.

Digitization of the construction sector has stimulated innovation in the region, which is further expected to impact the construction trends and drive market growth. The Federal Ministry in countries such as the U.K., Germany, France, and Belgium supports the use of Building Information Management (BIM) for efficient performance, which is expected to support the industry growth.

The introduction of advanced construction additives among other construction materials is expected to create lucrative opportunities for market participants over the next seven years. Cross-laminated timber is gaining popularity among developers as well as among homeowners, which, in turn, is expected to support the growth of the construction industry, thereby benefitting the overall growth of Europe civil engineering market.

The construction segment emerged as a dominant segment in 2018, accounting for 42.6% of the revenue share, and the trend is expected to continue over the projected period. The federal government’s initiative to invest in housing and infrastructure projects to meet the needs of the rising population is the factor contributing to the growth of the sector.

Maintenance was the second-largest segment and accounted for 22.7% of the revenue share in 2018 and is expected to grow at a substantial rate over the forecast period. Regular maintenance of building structures to extend its life-cycle and avoid any damages is a factor driving the growth of the segment.

Planning & design segment is expected to witness substantial growth as planning & design ensures proper integration of design and construction process such as resource management, costs, and logistics operations. However, the segment has been facing declining productivity owing to some deficiencies in building designs.

Real estate segment accounted for 40.2% of the revenue share in 2018 and the segment is anticipated to witness a significant growth rate in the region’s emerging economies. Estonia, Latvia, and Sweden have significantly realized the importance of improving their investment index for the construction of residential buildings to address the housing shortage, which, in turn, is expected to propel the growth of the segment over the forecast period.

The industrial sector emerged as the second-largest sector in 2018 and accounted for 30.4% of the revenue share. This can be attributed to economic recovery in France to offer positive prospects for industrial building construction and increasing manufacturing activities in Italy, the U.K., and Ireland. The EU has a well-established manufacturing base, primarily in developed economies such as the U.K., France, and Germany, which has resulted in the construction of a large number of warehouses and industrial buildings across the region. As a result, it is anticipated to have a positive influence on the growth of the segment.

The infrastructure segment accounted for 29.4% of the revenue share in 2018 and is expected to grow at a rapid pace over the forecast period. The rise in inclination toward the designing and development of ‘flexible’ infrastructure and an increase in R&D for the same is expected to propel the growth of the application segment over the forecast period.

Government customers segment emerged as a dominant segment in 2018 and accounted for over 39.5% of the revenue share in civil engineering services. Factors responsible for the growth of this segment include rising investments from the public sector in the non-residential segment owing to the availability of favorable government policies.

The private sector including construction contractors, transport infrastructure developers, individuals, and real estate developers are the major customers of civil engineering services. The private segment accounted for 30.1% of the market’s revenue share and is expected to register a substantial growth rate over the forecast period. 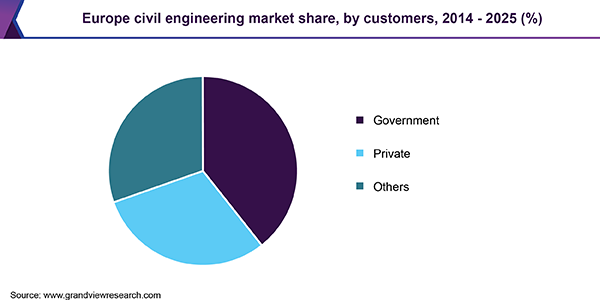 Growing private investments in construction, maintenance, and operation of social infrastructure including green spaces, public transport facilities, parking areas, healthcare, education, and cultural establishments are expected to drive the demand for civil engineering services from private customers across the region. National Infrastructure Delivery Plan (NIDP) in the U.K. has planned investments in the public and private sector through 721 projects under the National Infrastructure and Construction Pipeline (NICP). NICP is expected to be delivered through government investment while the rest of the projects such as housing projects rely on private investments. Furthermore, it indicates a high growth potential for civil engineering services from investment in private sectors.

The construction sector is a major contributor to the overall GDP in almost all countries across Europe. The Europe civil engineering market is expected to witness a significant growth rate owing to the growing residential sector in developed countries such as Germany, the U.K., and France. High emphasis on regular renovation in the region is also expected to contribute toward the industry growth.

Germany accounted for a dominant revenue share of over 13.7% in 2018 and is expected to continue its dominance over the forecast period. Factors responsible for the growth of this region comprise the booming construction industry owing to government initiatives in the form of tax incentives.

The civil engineering market in the U.K. is expected to be driven by strong growth in construction and refurbishment activities in key sectors such as offices, restaurants & resorts, transport buildings, and online retail warehousing. The government has forced several energy efficiency legislation and initiatives such as Energy Company Obligation (ECO) to reduce overall carbon emissions, which is likely to drive renovation activities in the country.

Major construction projects in France to develop infrastructure is expected to further boost the market growth. The projects include the Asvel Arena, which is a sports arena consisting of 10,500 seats and 2,000 square meters of shops and venue for major events and concerts and the Hexagone Balard, which hosts new offices for the French ministry of defense.

The presence of a large number of suppliers in the regional and international markets lead to low switching cost for customers. In addition, there exists low service differentiation among suppliers, which leads to an increase in the competitive pressure among market players, thereby lowering the bargaining power of suppliers.

The market is highly competitive owing to the presence of several major players operating across the region. Rapid industrialization in emerging economies such as Poland, Finland, Norway, and Denmark is expected to attract high investments in the market. Some of the prominent players in the Europe civil engineering market include:

This report forecasts revenue growth at regional and country levels and provides an analysis on the industry trends in each of the sub-segments from 2014 to 2025. For the purpose of this study, Grand View Research has segmented the Europe civil engineering market report on the basis of services, application, customers, and country:

How big is the europe civil engineering market?

What is the europe civil engineering market growth?

b. Construction dominated the europe civil engineering market with a share of 42.9% in 2019. This is attributable to rise in the commercial construction coupled with increase in construction refurbishment.

Who are the key players in europe civil engineering market?

What are the factors driving the europe civil engineering market?

b. Key factors that are driving the europe civil engineering market growth include rising investments in construction industry and rising population.