The Europe dog dewormers market size was valued at USD 350.49 million in 2021 and is expected to expand at a compound annual growth rate (CAGR) of 9.56% from 2022 to 2030. Increasing expenditure on dogs and the rising adoption of e-commerce websites to order supplies for pets are fueling the market growth. According to Cooper Pet Care B.V., in 2021, there were nearly 140 million pets in the European Union. Furthermore, the high canine population and its ownership are expected to fuel market growth. 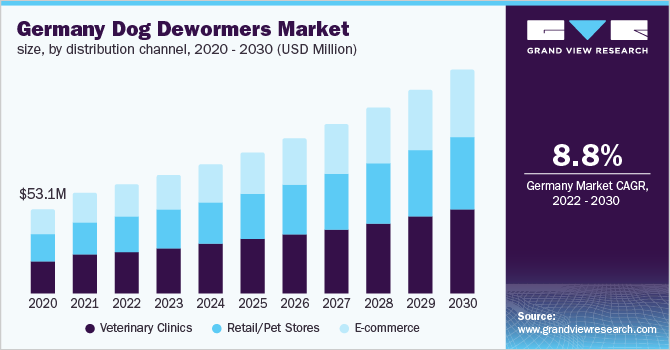 The spread of the disease brought the region to a halt, affecting research and development activities, medical supply, and vet services in almost every part of Europe. After the declaration of COVID-19 as a pandemic by the WHO due to its widespread, European countries such as Russia and Germany announced a complete lockdown to curb the spread. Due to this, similar to other industries, the animal healthcare industry has been significantly affected. Some of the accountable impacts of COVID-19 on the market include a decline in veterinary clinics' admission rates and supply chain disruptions.

The growing dog population is expected to boost the demand for veterinary healthcare services and boost the overall expenditure on them. According to data published by N26 GmbH, in October 2020, around USD 15.8 to USD 52.8 (EUR 15-50) per month is spent on dog insurance, depending on their breed. As per the same source, USD 52.8 to USD 63.36 is spent on routine veterinary care per visit. Furthermore, according to a report published by EAE Business School, in July 2017, the average annual spending on dogs in Spain was around USD 121.95 (EUR 130) per household.

Market players are investing in R&D activities and developing new as well as existing products for better animal health outcomes. However, as patents expire, the entry of generic drugs into the market may pose a threat to product sales. For instance, in 2019, Dechra pharmaceuticals launched 15 products from its Le Vet pipeline. Norbrook launched five R&D projects in the last 12 months, with plans to develop 10 more products in the next 2 years. Elanco, in its investor presentations, reported a shift in purchasing behavior of veterinarians, farmers, and pet parents to online channels. The company has thus identified continuous digital ecosystem enhancement as a key growth driver.

The veterinary clinics segment held the largest revenue share of over 35.0% in 2021 owing to the rising adoption of pet animals, especially dogs, which has increased the number of veterinary clinic services in Europe. The growing population rate of dogs in the region is further boosting the market growth. According to the European Pet Food Industry, the dog population rate in Europe was estimated to be 90 million in 2020, with nearly 88 million households in Europe owning a pet. The retail/pet stores segment is expected to grow at a significant rate over the forecast period. With an increased number of European households owning pet animals, their demand for convenient access to numerous pet products is increasing. 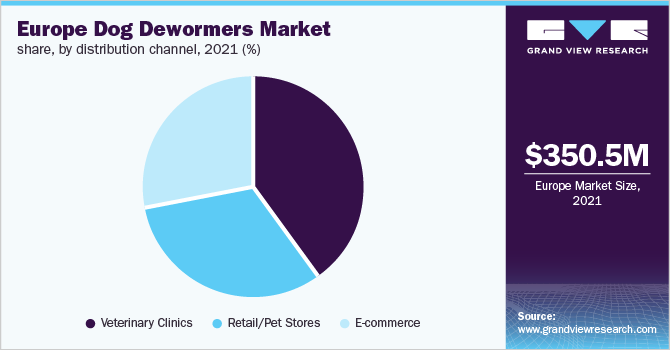 The e-commerce segment is anticipated to register the fastest growth rate of 9.99% over the projected period. Online sales of dog dewormer products have grown widely during the COVID-19 pandemic. E-commerce has become a convenient and easily accessible platform for pet care products. These online platforms provide a wide range of dewormers in different flavors, sizes, and quantities at affordable prices. These platforms enable consumers to shop quicker and faster in the most efficient way. In addition, subscription plans enabled by famous e-commerce sites such as My Lovely Dog (Poland) have unveiled better opportunities for segment growth.

Germany dominated the European market with a revenue share of over 15.0% in 2021. The implementation of various rules and guidelines by the German government to prevent parasitic infections among dogs is the major key factor driving the market. Importing dogs into Germany from other countries follows up stringent regulations to prevent any infectious dog entrance. For instance, dogs entering Germany from the U.S. requires USDA veterinarian approval with VEHCS (Veterinary Export Health Certification System), stating the dog is completely dewormed.

The market in Ireland is anticipated to witness the fastest growth during the forecast period. In Ireland, lungworms are the most common parasite spreading across dogs. These cause blood clotting and breathing difficulties, and some might lead to life-threatening problems such as heart failure in dogs. According to Acorn Veterinary Clinic, pet owners in Ireland are recommended to deworm their adult dogs once every 3 months.

The market is competitive. Key companies deploy strategic initiatives such as product development and launches, and sales and marketing strategies to increase product awareness, regional expansion, and partnerships to expand their market share. For instance, in January 2022, Boehringer Ingelheim International GmbH announced that it has collaborated with MabGenesis, a privately-held biopharmaceutical company in Japan. This initiative aimed to develop monoclonal antibodies for canine diseases. Some prominent players in the Europe dog dewormers market include:

This report forecasts revenue growth at the regional and country levels and provides an analysis of the latest industry trends and opportunities in each of the sub-segments from 2017 to 2030. For this report, Grand View Research has segmented the Europe dog dewormers market report based on distribution channel and country:

How big is the Europe dog dewormers market?

What is the Europe dog dewormers market growth?

b. Germany dominated the Europe dog dewormers market with a share of 18% in 2021. This is attributable to implementation of various rules and guidelines by the German government.

Who are the key players in Europe dog dewormers market?

What are the factors driving the Europe dog dewormers market?

b. Key factors that are driving the Europe dog dewormers market growth include increasing expenditure on dogs, the high canine population & its ownership, and the rising adoption of e-commerce websites to order supplies for pets.