The Europe, MEA, and CIS Extracorporeal Membrane Oxygenation (ECMO) machine market size was valued at USD 86.3 million in 2018 and is anticipated to expand at a CAGR of 4.5% during the forecast period. The increasing number of patients suffering from respiratory failure and cardiovascular diseases in emerging countries, such as Russia, the Czech Republic, Saudi Arabia, and Kuwait, among others is anticipated to drive the growth. 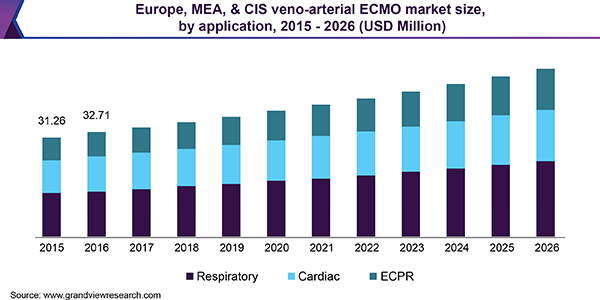 Key drivers of the ECMO machine market include the rising incidence of cardiopulmonary and respiratory diseases along with a rising number of patients suffering from Chronic Obstructive Pulmonary Disease (COPD). Moreover, technological advancements in ECMO devices have also resulted in increased adoption of the devices in hospitals, thus intensifying the market growth. However, factors such as high cost and increased risk of complications might hinder the growth during the forecast period.

According to the European Cardiovascular Disease Statistics, more than 85 million people were living with Cardiovascular Disease (CVDs) in Europe in 2015. Overall CVD is expected to cost the European Union (EU) economy EUR 210 billion a year. In 2014, the total number of deaths caused by ischemic heart diseases was 315,839 in countries such as the Czech Republic, Estonia, and Russia. The increasing access to health insurance, increasing privatization, and regional disease burden are the primary factors responsible for the growth of Europe, MEA, and the CIS market. Varying socio-economic conditions and political developments across the Middle East are entirely conceivable for companies to find opportunities for R&D in the healthcare industry. Moreover, the development of regional healthcare infrastructure is also anticipated to drive the demand for extracorporeal membrane oxygenation machines over the next few years.

According to Eurostat data, around 61% of women and 45% of men in Estonia died due to cardiovascular diseases in 2014. Middle Eastern countries, such as Saudi Arabia are the prospering economies and are rapidly growing. Increasing healthcare expenditure is also propelling the market growth in the region. According to the National Institute of Health Development, the average annual rise in healthcare expenditure from 2009-to 2015 was 6.2%. However, the presence of stringent regulations for medical devices may restrict the market growth. For instance, in Estonia, manufacturers need to apply for a CE mark for the commercialization of each of the medical devices.

On the basis of components, the market is segmented into pumps, controllers, oxygenators, cannulas, and other accessories. The oxygenator segment dominated the market with over 30% revenue share in 2018. The segment is expected to continue to lead the ECMO machine market during the forecast period, owing to the efficiency and reliability of the component and rising awareness about applications of extracorporeal membrane oxygenation machines. Furthermore, the increasing incidence of lung cancer among pediatrics and adults is also propelling the usage of ECMO machines, thereby propelling the demand and uptake of these components.

The controllers market is expected to witness significant growth over the forecast period. Control panels are used for monitoring pressure and blood gas levels. The increase in incidences of cardiopulmonary diseases, such as COPD and cystic fibrosis is driving the growth of the segment. In addition, factors such as technological advancements and the increasing prevalence of respiratory diseases are also expected to propel market growth in the forthcoming years.

Key application segments include respiratory, cardiac, and extracorporeal cardiopulmonary resuscitation. Based on the type of patient, the applications are sub-segmented into neonates, pediatrics, and adults. The respiratory segment dominated the Europe, MEA, and CIS ECMO machine market in 2018 with a share of over 41.0% and is also expected to witness the fastest growth over the forecast period. Factors that can be attributed to the growth include the increasing number of patients suffering from respiratory failure in emerging countries, such as Russia, the Czech Republic, Saudi Arabia, and Kuwait, among others. In cases of respiratory failure, two vascular accesses are drawn, one from which blood is drained through the major vein and passed into the oxygenator, and the other, which facilitates the flow of oxygenated blood into the patient’s body.

Extracorporeal membrane oxygenation is used for the treatment of respiratory problems, such as respiratory failure, pulmonary hypertension, respiratory distress syndrome, meconium aspiration syndrome, and severe pneumonia, thereby indicating its high applicability. In the case of respiratory illnesses, ECMOs serve as artificial lungs, thus playing a crucial role in supporting pulmonary function. The ECMO systems are also used for treating severe cardiac conditions. The system uses the cardiopulmonary bypass circuit in case of reversible cardiac failure, which facilitates the flow of blood outside the body through the cannula toward the oxygenator and then the oxygenated blood is pumped from the oxygenator into the patient’s body through the circuit.

On the basis of modality, the extracorporeal membrane oxygenation machine market has been segmented into veno-arterial, veno-venous, and arterio-venous. These modalities represent different ways of setting up an ECMO circuit, which is employed to facilitate the gas exchange process in patients suffering from respiratory or cardiac failure. The veno-arterial ECMO circuit segment dominated the market in 2018 with a share of over 35.0% owing to its efficiency and reliability in gas exchange. The veno-arterial ECMO circuit finds its application in patients of cardiac arrest, assisting with algorithmic life support strategies to restore blood circulation. Due to technological advancements, VA-ECMO is used to treat patients suffering from pulmonary embolism and pulmonary hypertension, especially in the case of acute decompensation. 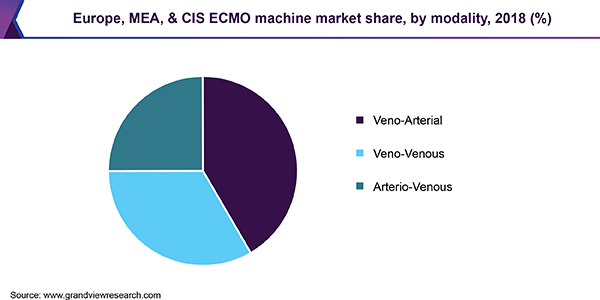 The Arterio-Venous (AV) ECMO circuit is mainly used to expedite the process of gas exchange and assist in the process of protective lung ventilation. In this circuit, low resistance devices are used, which facilitate the blood flow. AV-ECMO circuits are used to treat patients suffering from respiratory acidosis, severe hypercapnia, and moderate hypoxemia. The patient’s own arterial pressure is used for pumping the blood forward on the venous side. Thus, the absence of pumps makes it easier, safer, and cost-effective as compared to other circuits. The aforementioned factors are anticipated to drive the market growth during the forecast period.

In 2018, Europe held a share of over 20.0% of the market share. Europe is one of the most developed regions in the world. Increasing public and private investment in R&D, demand for healthcare devices, and rising prevalence of chronic diseases, such as respiratory failure and cardiopulmonary diseases are some key factors driving the regional growth. In 2013, around 6.5 million people discharged from hospitals were suffering from respiratory diseases, according to Eurostat. Increasing demand for advanced technologies and rising health awareness are some of the key factors that are expected to boost market growth.

The markets in the Middle Eastern and African countries hold significant potential for ECMO machines owing to the increasing prevalence of cardiac and respiratory diseases. Cardiovascular diseases are among the top three causes of death in African countries. Key factors contributing to the increasing prevalence of cardiac pulmonary and respiratory diseases are poor eating habits, obesity, and lack of physical activity. Moreover, the high adoption of technologically advanced and innovative products in emerging countries, such as Russia, the Czech Republic, and Turkey is also contributing to market growth.

Getinge Group, through its subsidiary Maquet Holding, offers a wide range of products for short-term and prolonged ECMO support. The portfolio includes devices and consumables such as centrifugal pumps, oxygenators, catheters, cannulae, tubing sets, and other accessories to provide adequate cardiac and/or respiratory support to critically ill patients. The company’s Cardiohelp System is a highly portable and compact heart-lung support system that can be used in cases of myocardial and/ or respiratory failure.

This report forecasts revenue growth at regional and country levels and provides an analysis of the latest industry trends in each of the sub-segments from 2015 to 2026. For the purpose of this study, Grand View Research has segmented the Europe, MEA, and CIS Extracorporeal Membrane Oxygenation (ECMO) machine market report on the basis of component, modality, application, and region:

b. The Europe, MEA, and CIS Extracorporeal Membrane Oxygenation (ECMO) machine market size was estimated at USD 90.1 million in 2019 and is expected to reach USD 94.1 million in 2020.

b. The oxygenator segment dominated Europe, MEA, and CIS Extracorporeal Membrane Oxygenation (ECMO) machine market with a share of 30.4% in 2019. This is attributable to the rising efficiency and reliability of the component and rising awareness about applications of extracorporeal membrane oxygenation machines.

Who are the key players in Europe, MEA, and CIS Extracorporeal Membrane Oxygenation (ECMO) machine market?

b. Key factors that are driving the market growth include increasing number of patients suffering from respiratory failure and cardiovascular diseases and technological advancements in ECMO devices.