The global exterior architectural coating market size was USD 22.54 billion in 2015. The market is projected to grow at a significant rate owing to increasing number of construction projects in emerging economies including China, Singapore, India, and Brazil. 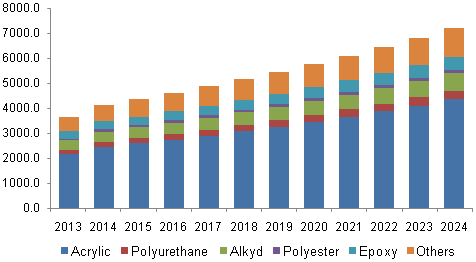 Rising government spending, foreign direct investments and public-private partnerships in emerging economies including Malaysia, Indonesia, Thailand, China, and India on account of the rapid development and growing infrastructure requirement are expected to be a key factor driving the industry growth.

Development of new waterborne technology having different formulations by companies such as Sherwin-Williams, PPG Industries, and AkzoNobel to impart antibacterial and anti-odor properties is expected to propel industry growth. Shifting consumer preference towards waterborne architectural coating owing to its eco-friendly nature will spur product demand.

Exterior architectural coatings’ manufacturers distribute their products through wholesale stores, hardware stores, and e-retailers. Easy availability and a wide variety of paints formulations are expected to increase the popularity of these commodities over the projected period. Increasing R&D investments by key industry players including PPG Industries, Nippon Paint, and AkzoNobel to develop eco-friendly products that offer high-quality finishes will open new market avenues. However, fluctuation in the prices of raw materials such as titanium dioxide, pigments, and resins is expected to restrain growth over the forecast period.

Acrylic was the largest resin type used and accounted for 58.9% of the overall revenue in 2015. The significant share was attributed owing to its excellent properties including high UV resistance, improved flow, stain resistance, superior aesthetics, durability, weather ability, performance, and low cost. Increasing demand for acrylic resins in waterborne coatings on account of superior gloss retention, excellent durability along with high performance will stimulate industry growth.

Emulsions were valued at USD 9.04 billion in 2015 and are expected to show high growth due to its water-based formulations and low emissions. Moreover, properties including quick drying, reduced toxicity, low cost, and an easier application will drive the demand over the forecast period.

"Waterborne technology will witness significant growth owing to stringent regulations imposed on solvents in the U.S. and Europe"

Waterborne technology accounted for 78.4% of the overall volume in 2015. The presence of strict regulations for the reduction of volatile organic compounds (VOCs) content in paints will fuel the demand. Furthermore, properties including accurate mixing, easier blending, superior metallic control, higher opacity, easier application, and cleaning will drive market growth over the next eight years.

"Residential architectural coating was the largest application segment in 2015"

Demand for the product in residential applications is expected to witness significant growth at a 5.5% CAGR from 2016 to 2024. Strong economic growth, rising disposable income, high living standards coupled with rapid urbanizations is expected to drive the product demand over the next eight years. Also, government support and ease of housing loans in countries such as the UK, India, China, and the U.S. will stimulate the industry growth over the forecast period.

Asia Pacific was the largest consumer and accounted for 34.3% of the global volume in 2015. The presence of major manufacturers including Nippon Paint, Kansai Paint, Jotun Paints, and Berger Paints in China, India, and Japan is expected to promote the product availability. Furthermore, major companies such as BASF, PPG Industries, and AkzoNobel are shifting their production bases from North America and Europe to Asia Pacific on account of low production costs which will further propel the industry growth. The Government of India with a mission and vision to create 100 developed cities launched smart cities program in 2015, which in turn will create immense market potential over the forecast period.

Europe was another prominent market accounting for 27% of the global share in 2015. However, the region is expected to witness sluggish growth on account of the slow growth of the construction sector in the region.

MEA and Latin America together accounted for less 20% of the overall market in 2015, however, these regions are expected to witness significant growth over the forecast period on account of the substantial development of infrastructural facilities. Increasing construction of residential and commercial spaces to cater to the increasing demand for houses and offices is expected to play a vital role in driving the growth of industry in these regions over the forecast period.

Companies are expanding their market share through investments to increase their production capacity. For instance, in March 2015, Axalta Coating Systems opened a new waterborne coatings plant in Shanghai, China, to meet growing demand in the country. In September 2013, AkzoNobel invested more than USD 54.7 million in Chengdu, China, to build new manufacturing facilities for its coatings business to strengthen its strategic growth ambitions.