The global fetal (Labor & Delivery) and neonatal care equipment market size was valued at USD 6.3 billion in 2018 and is estimated to grow at a CAGR of around 6.9% over the forecast period. Some of the factors responsible for market growth are the high birth rate in developing countries, rising prevalence of preterm births, and efforts by the government to increase survival rates in such cases. 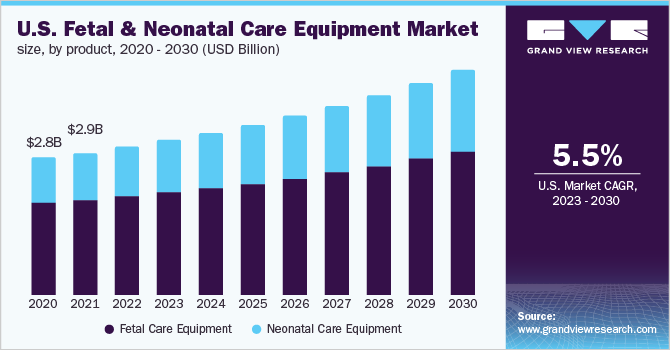 Increasing prevalence of neonatal hospital-acquired infections and rising awareness about neonatal health & care equipment is expected to contribute to market growth. According to the UN Foundation, maternal & infant care is a global priority, since around 800 women die every day from preventable causes associated with pregnancy or childbirth. This has led to increased demand for neonatal and fetal care equipment. Furthermore, HAIs are primarily a concern for premature and infants with medical disorders requiring prolonged hospitalization.

The UNICEF (United Nations International Children's Emergency Fund) data stated that 2.5 million children died in the first month of life in 2017 across the world. Furthermore, preterm and low weight birth babies are susceptible to many health risks and require specialized care. Hence, the demand for neonatal equipment is expected to grow exponentially.

Neonatal equipment has been observed to have an increasing demand in middle-income countries, as birth rates in these countries are higher, and the priority for improved fetal & neonatal care is high in these countries. As a result, sales of the equipment are expected to flourish at a rapid rate.

Based on product type, the market has been segmented into fetal care and neonatal care equipment. In 2018, ultrasound devices held the largest share in fetal care equipment owing to its increasing application to view the fetus during pregnancy. Besides, rising awareness, technological advancements, and ease in utility have further triggered the usage of portable and do-it-yourself ultrasound devices for home-use.

The fetal monitor segment is anticipated to witness the fastest growth rate during the forecast period, owing to its utility in determining the baby's heart rate during pregnancy and labor. Fetal monitoring devices are essential as it allows continuous monitoring of the baby's heart rate and contractions and assists in labor too. In January 2019, Owlet received an award for its band which can provide expecting mothers real-time updates about the baby's well-being. The band can track the baby’s heart rate and kick count and can send alerts about contractions. The company is planning to launch a product later in 2019.

In neonatal care equipment, the monitoring devices segment held the largest share in the year 2018, due to factors such as constant technological advancements in neonatal monitors including improvements in connectivity and ease-of-use in home settings.

On the other hand, respiratory devices are expected to exhibit the fastest growth rate owing to increasing demand for respiratory care in neonatal to reduce the length of hospital stay and risk of long-term disability. Nearly all newborns are prone to respiratory difficulties at birth, and neonate respiratory devices ease the process ensuring better health of the baby.

By end-use, the neonatal infant care equipment market is segmented into hospitals, diagnostic centers, and clinics & others. The hospital segment held the highest share globally in 2018 and is expected to grow at the fastest rate. Factors attributing to the largest share were the presence of latest & technologically advanced equipment to improve patient care and availability of specialists. 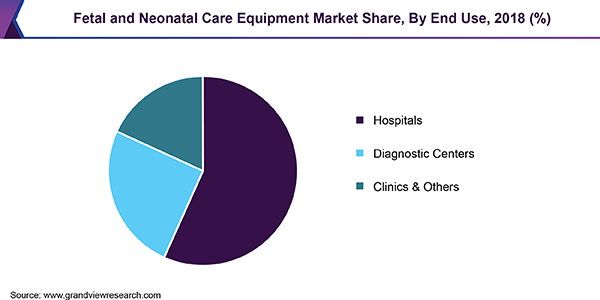 Clinics & others such as home care, nursing centers held the second-largest share in the overall end-use segment. Clinics deliver specialized services and are often preferred in places wherein large scale setups are not available. Clinics are expected to grow at a steady rate during the forecast period.

North America held the largest share of the global fetal and neonatal care equipment market in 2018. The U.S. accounted for a major share owing to a huge demand for technologically advanced products ensuring better healthcare delivery. The value-based healthcare model has led to the development of well-equipped NICU centers along with an increasing number of approvals for these devices from the FDA.

On the other hand, the Asia Pacific market is anticipated to register the fastest growth in the forecast period. Increasing government initiatives in developing countries such as India has established a strong demand for pediatric health equipment. For instance, the National Rural Health Mission is an initiative aimed at increasing public expenditure on health to provide better healthcare facilities to mothers and children.

These players are collaborating with leading child care provider networks, to ensure better recognition and push product sales. For instance, in November 2016, Boston Children’s Hospital and GE Healthcare collaborated for the treatment and diagnosis of pediatric brain disorders by using smart imaging technology.

In January 2019, Abbott received the U.S. FDA approval for its Amplatzer Piccolo Occluder, a pea-sized neonatal heart device. This is the first device across the world to treat patent ductus arteriosus (PDA) in premature babies weighing lesser than two pounds.

This report forecasts revenue growth and provides an analysis of the industry trends in each of the sub-segments from 2015 to 2026. For this study, Grand View Research has segmented the fetal and neonatal care equipment market based on the product, end-use, and region:

How big is the fetal and neonatal care equipment market?

b. The global fetal and neonatal care equipment market size was estimated at USD 6.6 billion in 2019 and is expected to reach USD 7.0 billion in 2020.

What is the fetal and neonatal care equipment market growth?

Which segment accounted for the largest fetal and neonatal care equipment market share?

b. North America dominated the fetal and neonatal care equipment market with a share of 41.1% in 2019. This is attributable to the U.S. as it accounted for a major share owing to a huge demand for technologically advanced products ensuring better healthcare delivery.

Who are the key players in fetal and neonatal care equipment market?

b. Some key players operating in the fetal and neonatal care equipment market are Becton, GE Healthcare, Becton, Dickinson and Company, Koninklijke Philips N.V., THE DRAGER GROUP, and Medtronic.

What are the factors driving the fetal and neonatal care equipment market?

b. Key factors that are driving the fetal and neonatal care equipment market growth include increasing prevalence of neonatal hospital-acquired infections and rising awareness about neonatal health & care, the high birth rate in developing countries, rising prevalence of preterm births, and efforts by the government to increase survival rates in such cases.