The global film dressing market size was valued at USD 1,454.34 million in 2021 and is projected to expand at a compound annual growth rate (CAGR) of 4.54% from 2022 to 2030. The increasing prevalence of chronic and acute wounds is the key factor driving the film dressing market. For instance, Healogics, LLC in 2022 stated that around 7.0 million Americans are living with a chronic wound. Similarly, according to the article published in the African Journal of Health Sciences Volume, 2020, the prevalence of diabetic foot ulcers is highest is Belgium at 16.6% followed by Canada at 14.6%, USA and North America at 13.0% while Asia, Europe, and Africa had a prevalence of only 5.5%, 5.1%, and 7.2% respectively. 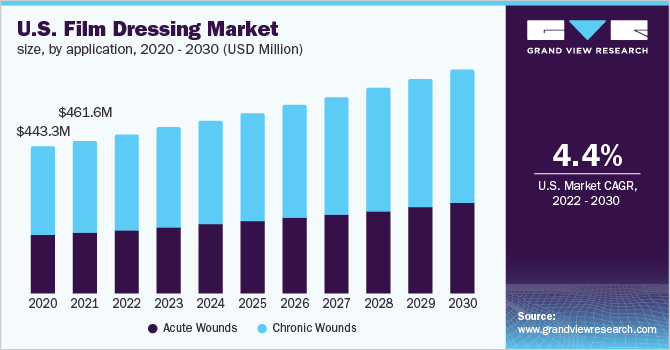 Moreover, it is anticipated that rising rates of burns, trauma, and accidents is likely to boost the expansion of the film dressing market. For instance, according to Undersea and Hyperbaric Medical Society, in the U.S., there are more than 2.0 million burn injuries reported each year, and 14,000 people pass away, whereas, about 20,000 have injuries that necessitate admission to a burn unit.

Moreover, each year, around 75,000 individuals need to be hospitalized, and 25,000 of them stay there for more than two months. These incidents frequently cause serious bleeding and other injuries, demanding immediate medical attention and surgical procedures to provide patients with immediate relief.

Thus, rising prevalence of chronic and acute wounds is likely to boost demand for the film dressings, as they are effective for the wounds of varying thicknesses. Thereby aforementioned factors are driving the film dressing market growth.

Film wound dressings have been invented technologically to better wound diagnosis and therapies in response to the increasing financial burden of wounds on worldwide healthcare systems. Film dressings are an easy and efficient alternative to keep a moist wound environment and speed up the healing of superficial wounds.

They are advised for the treatment of minor burns and simple wounds, and their versatility allows them to be employed to conceal sutures following surgery. There are certain advantages of utilizing film dressing over other types of dressings.

Some of the benefits are as follows:

The market is in its early phases, with constant research being carried out to develop film dressings. Here are a few examples of recent research studies:

Therefore, increased R&D spending and the launch of improved film dressings by key companies and the organizations are among the factors, anticipated to fuel the market expansion, during the years to come.

The COVID-19 had a negative effect on the film dressing industry since elective procedures were postponed or cancelled. The market has again recovered from the epidemic, due to the increased telemedicine and virtual consultation penetration. For instance,

A number of studies also demonstrate that telemedicine alternatives are a cost-effective strategy to increase patient compliance and satisfaction while enhancing wound care outcomes. In addition, insurance companies also cover telemedicine costs. In the post-pandemic period, the aforementioned factors will probably cause the film dressing industry to expand rapidly.

Acute wounds segment is expected to develop at the fastest CAGR of 4.66% during the forecast period. The surgical & traumatic wounds segment held the largest share in 2021. One of the primary factors fueling the segment's growth is the rise in surgical site infections. SSIs are the main cause of surgical wounds. For instance, 2% to 4% of patients undergoing inpatient surgical procedures get SSI, according to the Agency for Healthcare Research and Quality. In addition, research by Wounds International indicated that 11.7% of patients, who underwent general surgery, developed surgical site infections (SSI), which led to 19.2% of patients needing to be readmitted during the study period.

Due to the increasing frequency of burn injuries, the burns segment is estimated to experience the considerable growth rate during the forecast period. According to the Joye Law Firm, following are the statistics about burn injuries in the U.S.:

Therefore, rising prevalence of traumatic wounds, SSI and burn injuries are among the factors anticipated to propel segment growth throughout the forecast period.

Chronic wounds segment held the largest share of 59.93% in 2021 and is foreseen to witness substantial growth rate during the forecast period. Rising incidence of diabetes and diabetic foot ulcers is a major factor driving the segment growth. For instance, according to Science Direct, more than 25.0% of diabetics may develop diabetic foot ulcers, and 20.0% of the patients may require foot amputation. Moreover, as per the National Diabetes Statistics Report by CDC, 37.3 million i.e., 11.2% of the U.S. population had diabetes.

Similar to this, the CDC predicted that almost 96.0 million Americans, aged over 18 or older, would have prediabetes. Additionally, 26.4 million adults, aged over 65 and above, were expected to have prediabetes, according to a similar source. Since the usage of film wound dressings aids in the healing of these ulcers, the segment is anticipated to grow during  the forecast period.

The hospital segment held the largest share of 45.28% in 2021.The dominance of this segment is mainly due to the rise in the number of hospitals and patients, worldwide. For instance, according to Smith & Nephew, in a typical hospital setting, patients with wounds occupy between 25 and 40% of beds. Additionally, an increase in surgical procedures is further fueling the segment growth.

For instance, according to the most recent figures reported in a study article, published in NCBI, 31, 02,674 surgical procedures were performed in England & Wales, overall in 2020. Since film dressings are frequently used for the surgical incisions, their use is likely to grow as more procedures are performed.Hence, owing to aforementioned factors, the segment is predicted to impel during the forecast period. 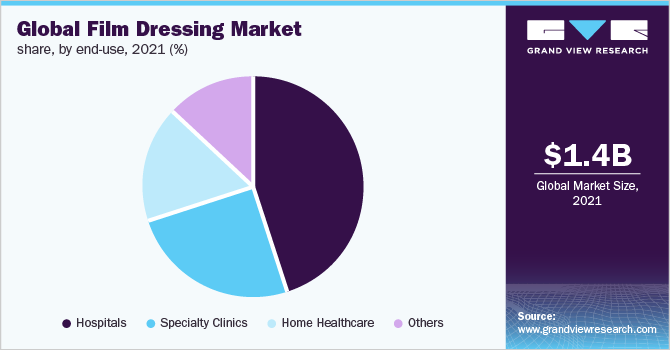 Home healthcare segment is anticipated to expand at the fastest CAGR of 5.21% during the forecast period due to the patients' growing inclination from hospital to home care settings for the personalized wound care. Most procedures have a prolonged healing phase, which necessitates regular dressing changes. Additionally, elderly people with wounds prefer home care over hospitalization.

Rising number of geriatric population, globally, is projected to fuel the film dressing market. For instance, as per Economic and Social Commission for Asia and the Pacific, there will be 1.3 billion older people worldwide in 2050, up from 630.0 million in 2020. Correspondingly, 13.6% of the Asia-Pacific region is predicted to have a quarter of the world's elderly population by 2050.

Extended hospital stays are frequently required for the conditions like venous leg ulcers, diabetic foot ulcers, and surgical wounds, which can be challenging for elderly individuals. Thereby, boosting the film dressing market.

Additionally, a rising number of individuals with chronic diseases opt to receive treatment at home due to the escalating healthcare costs. As film dressings are used to treat, diagnose, and monitor a variety of chronic and acute wounds, this trend is anticipated to increase demand for them. Therefore, it is projected that these factors will spur segment expansion during the forecast period.

North America dominated the film dressing market with the share of 45.43% in 2021 and is expected to witness the considerable growth rate throughout the forecast period. The region’s dominance can be accredited to rising prevalence of the chronic wounds, higher treatment costs, and the accessibility of supportive reimbursement programs in the U.S. and Canada.

According to the research article published in NCBI, 2021 in the U.S. around 2.0% of the total population are estimated to be affected by the chronic wounds. Similarly, according to the data reported by the Wound Source, it is estimated 500,000-600,000 people have venous leg ulcers in the U.S. As a result of the large patient population suffering from chronic wounds, there is an increasing need for the advanced wound care products such as film dressings, thereby helping region dominate the market.

Asia Pacific region is estimated to witness the highest growth of CAGR 5.19% in the global market for film dressing during the forecast period. Numerous prospects exist for the introduction of new products on the market, which is continually expanding. Additionally, this region is experiencing an increase in medical tourism, which is leading to an increase in surgical procedures. 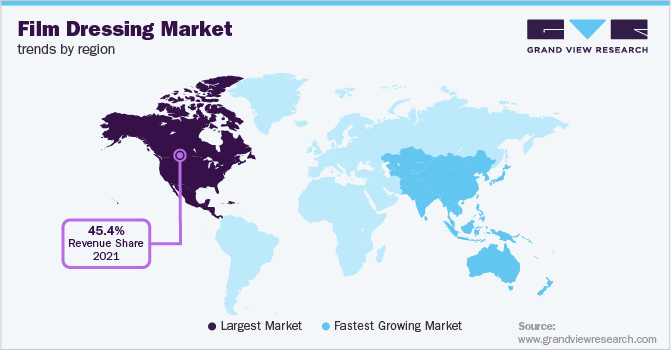 For instance, according to a study by the Indian Institute of Public Administration, 697,453 foreign tourists visited India for the medical treatment in 2019. A combination of increased government support and a focus by the major players on the developing Asian countries has led to an expansion of the film dressing business in this region.

The film dressing market is consolidated and is dominated by the few large manufacturers. Degree of competition and competitive rivalry in the market is anticipated to intensify during the forecast period. Major companies are focusing on merger acquisitions, product launches and approvals, geographic expansion to have competitive edge over others. Some of the prominent players in the global film dressing market include:

This report forecasts revenue growth at global, regional, and country levels and provides an analysis on the latest industry trends in each of the sub-segments from 2018 to 2030. For this study, Grand View Research has segmented the global film dressing market report based on the application, end-use, and region: 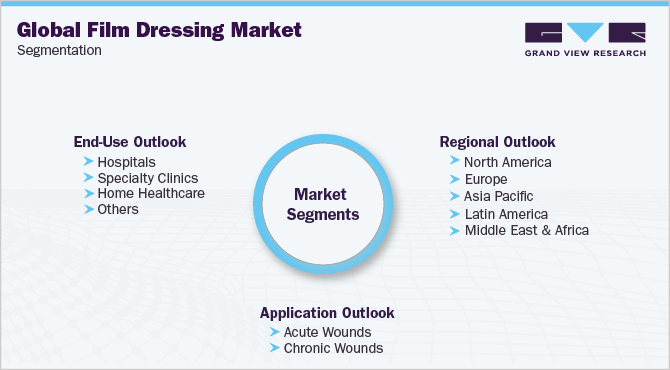 How big is the film dressing market?

What is the film dressing market growth?

Which region accounted for the largest film dressing market share?

b. North America dominated the film dressing market in 2021 during the forecast period and is expected to witness a growth rate of 4.58% over the forecast period. This can be attributed to the rising patient population and the presence of major market players

Who are the key players in the film dressing market?

What are the factors driving the film dressing market?

b. Key factors that are driving the market growth include an increasing number of traumatic accidents, the surge in the global geriatric population, rising technological advancements, rise in the number of people suffering from different chronic and acute disorders, and a rising incidence of burn cases worldwide.